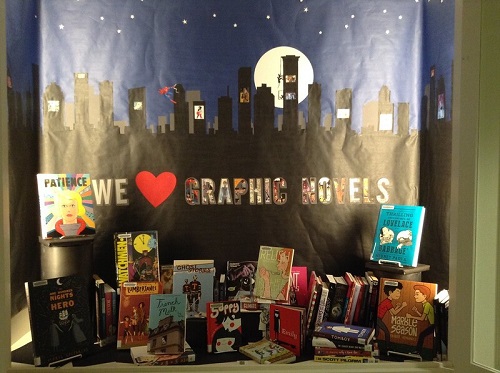 I find it hard to read comics. I’m sure that’s not unusual for text-centric people who grew up in the 1960s and 70s and had to discover comics as a genre not out of love for art, but primarily out of a desire to better understand today’s kids and teenagers. And then, as things tend to go–we ended up learning more about ourselves than about them.

I, for one, learned what it is that makes it so hard for me to read comics. It’s hard (even uncomfortable) to follow along through the sequence of frames–I struggle to move my eyes in that way. We look at book illustrations (and pictures in general) completely differently—feeling them out freely with our eyes. But the frame of a comic has to be quickly “registered” as a complete message. Then you move your gaze to the next frame, which is why the image has to be symbolic to a certain degree. The conventions of the form bother me. I find them primitive—though they’re not. These are, I’ll admit, my personal “biases.”

And then, you have to take in the picture along with the text, even if there isn’t much of it. That’s another thing you don’t usually find in text-based books, even illustrated ones. Perusing the illustrations of a book is a change in activity: first you read, then you look. An illustration somehow explains things, it complements the text. Its job is to work for the text. In a comic things are reversed: it’s the text that goes to work for the image, clarifying and completing it. The gap between understanding the image and the text is minimized. And that contradicts the learned and practiced skill of reading text.

After all, how is it that children normally learn to read?

Pictures in books, besides their function of supporting the text, also allow a beginning reader to relax and take a break from reading. Children do know how to look at pictures. That’s something they master before learning the letters, back when they are read aloud to. The less experience a child has of independent reading of text and the weaker his reading skills, the more he’ll need to rest by switching to look at the pictures. As he becomes a more experienced reader, he’ll need less pauses for rest and will be ready to take on “denser” text. Illustrations will be free of their role in offering the reader a respite. At a certain point they become an aesthetic bonus to the text, pure “decoration” the reader can technically do without. At this stage, pictures don’t affect the reading process, nor are they crucial in understanding the story.

So reading tends to develop toward a freedom from the “support” the illustrations offer.

It’s no surprise, then, that people who have long been avid readers of text see reading comics as almost regressive. It’s like they’re being asked to return to an earlier skill level, when their reading required frequent breaks.

But the language of comics is not a more primitive one. It’s simply different. That became clear when we (rather belatedly) became acquainted with comics that transcend the classic superhero universes and when Russian comic book artists came on the scene. We learned that comic book authors will take on any of today’s toughest topics and that we now tend to refer to these works as graphic novels.

This term underwent a rather interesting transformation in the Russian-speaking world. In the West, where the culture of comics came about and developed, the term “graphic novel” denoted simply a thick comic book—one that had over 42 strips. In Russia, the “graphic novel” evokes a novel in general. And for us, a novel is a serious affair, deserving of respect. The traditional regard for novels that emerged back in the nineteenth century dictates that we extend that same respect to the graphic novel.

Of course, graphic novels like Maus and The Diary of Anne Frank: The Graphic Adaptation are serious works on serious topics. It was their arrival that marked a change in how we came to see graphic novels. It became clear that treating comics as something primitive and undeserving of attention was groundless snobbery.

After all, we may not like something simply because we don’t know how to use it. I don’t know if admitting that will bring us closer to teens, but I do feel that a healthy level of self-criticism expands our understanding. In the near future, that may well come through in the way we teach our children to read.

A child learns to read comics at about the same stage as when they master their A-B-Cs. (Stories told in pictures are accessible to children well before then. But those aren’t quite a comic, which has much more conventionality and pithiness to the images.)

And if comics are so important to the modern world (the marked change in how “educated society” sees them is reminiscent of the shift in attitudes toward folktales 200 years ago), then it likely makes sense to “legalize” comics in a household reading setting and even read them aloud to your child on occasion.

For a long time I couldn’t imagine how that was done—how do you read a book where there’s practically no text and the reading requires not even a perusal of illustrations but looking through a sequential set of images? Then I came across a description of the process in Cyndi Giorgis’s Read-Aloud Handbook. For the new edition, Giorgis updated the ideas of the original handbook by Jim Trelease, the American educator who campaigned tirelessly for the virtues of reading loud. You can read a comic to one or, at most, two children at a time, so that they are able to follow along as the adult gives voice to the characters and reads the caption under each frame, sliding their finger from image to image as they move through the story.

That meant a child could simultaneously master text-based reading, and comic book reading. It’s clear that knowing how to read comics can help a child learn to read text. A child gains understanding of what makes up a book, a sense of plot development and of reading as a process that involves “decoding characters.”

I once interviewed Swedish writers Sassa Buregren and Elin Lindell and was struck by a deceptively simple, but deep point they made: it’s always best to give a child not one, but many opportunities to grow. And then it’s up to the child to take advantage of those opportunities, or not.

Regardless, a new attitude toward the comic will doubtless help create a new generation of readers of graphic novels and will, in turn, affect the genre as it develops. A developed, demanding reader always pushes writers and artists to new heights.