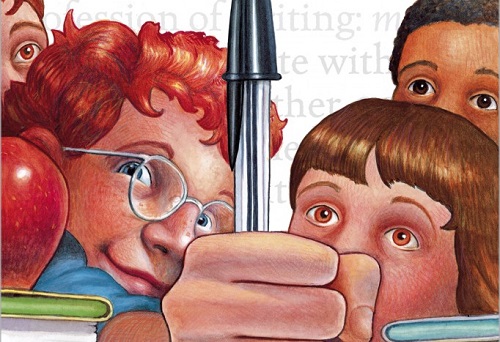 When I’d picked out the book for my sons, we were still living in the ordinary world—so familiar, so “free.” The world where you had to wear a school uniform and raced around on bikes with your friends. Where kids got bored in class and couldn’t wait for recess. Where the school cafeteria served an unappetizing bean soup and delicious cutlets. By the time we started reading Frindle [most recent English edition: Houghton Mifflin, 2012. ISBN 9780547073958], though, the pandemic was in full swing. Those school days retreated into the past. For my kids, as for many other kids in Russia and around the world, the days turned into long hours of Zoom classes, a ton of remote homework, and very real deadlines. Ordinary school became a distant, lovely, cozy memory. We feared those days would never return. That’s why Frindle wasn’t just another good read—it was all those feelings condensed into a book.

This is a typical “school story” about a great, inventive little boy bursting with ideas, and most importantly, bringing them to life. When he learns something new, he instantly wants to test it and find out for himself if things really are the way he’s been told.

Once the author has set the scene with several quirky examples of Nick Allen’s approach to life, he brings us to the crux of the plot—Nick decides to put something his English teacher said to the test. Are words really whatever people agree to use? If they are, we could renegotiate them, right? So Nick stages a grand linguistic experiment, hoping to replace the word “pen” with “frindle.” On his side are all the school’s students, on the opposing side is their English teacher, who inspired Nick’s idea. Mrs. Granger says language won’t tolerate an arbitrary contribution, and that Nick’s scheme is pure troublemaking.

Soon, the school administration, local reporters, and even TV join in the fray. An enterprising businessman from Nick’s hometown trademarks the word “frindle.” Now it’s not just students from the U.S., but kids from all over the world using the word—and buying merchandise under the Frindle brand. Nick, who gets royalties from the profits, gets fabulously rich and starts a college scholarship fund. His invented word makes it into the dictionary and his school teacher congratulates him on winning their feud.

The story is a concentrated one, but is full of light humor. It’s a very “American” story—a typical “success story” of a small-town boy that will easily inspire boys like Nick to take on the world.

My sons didn’t quite catch that aspect (maybe for the better). All the talk of trademarks, dollars, and trust funds went right over their heads. (Though ten-year-old Alexei did express surprise that Nick already had a side job, which is not at all common for kids that age in Russia.) Since school had now become a fond memory, Alexei was curious about all the details of the American school system and we extracted all the information we could from Frindle. There was the school cafeteria, what classes are like in the States, what the elementary school system is like, how teachers treat students, and so on. The book doesn’t paint these elements with much detail, but we still found it very informative. Also important was the fact that there was no ironic or cartoonish style. Even the main character’s antagonists are shown as normal people rather than caricatures. The book basically transported us to an American school, and Alexei relished being there, lovingly comparing what he “saw” in the book to his own school (“At our school it’s like this…remember?”)

Meanwhile, seven-year-old Ivan found he related strongly to the main character. I’d already started reading Frindle aloud to the boys when I suddenly remembered that Ivan had barely started first grade when he came home and announced: “Today, they told us that there aren’t any words that start with the letter “ы.” When I grow up, I’ll come up with one. We can’t just not have one.”

So Nick Allen was his kind of guy. Ivan was entirely indifferent to all of Nick’s newfound wealth (at seven we don’t doubt for a second that we’ll all grow up to be rich and famous), but it mattered a lot that Nick’s ideas changed the world and that Nick was able to defend his right to his idea. This was incredibly encouraging for Ivan, showing him the value of his own creative ideas (which didn’t always find adult approval).

Now, when Ivan comes across a particularly imaginative character in a book or movie, he says warmly: “There, he’s just like Nick. Like me and Nick.”