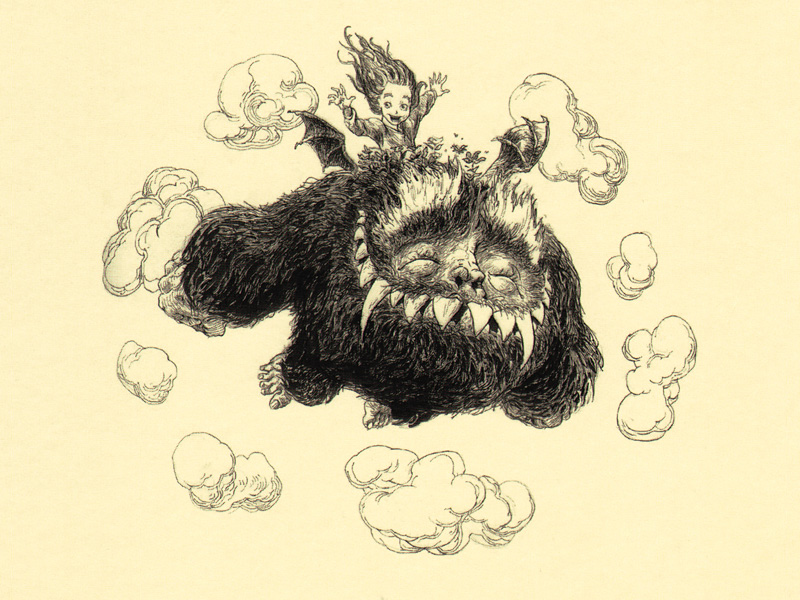 It’s not often you see a children’s story that truly pushes the envelope, testing the limits of acceptability. But The Yark by Bertrand Santini fits the bill [most recent English edition: Gecko Press, 2018. ISBN 9781776571727. Translated by Antony Shugaar]. The book’s pages proffer severed children’s heads, descriptions of human children being eaten up, and “bad” words. It’s true horror for the preschool set. At the same time, the story is deep, philosophical and gently didactic and is absolutely worth a look.

A hideous creature called the Yark just loves children. It’s a strange love, but a fitting one for a monster—he eats them. Misbehaving kids that don’t listen give the Yark indigestion, while sweet, well-behaved children go down easy.

The story’s protagonist has no visa restrictions, of course, so his menu consists of all kinds of children he picks up while flying on his tiny dragon wings across countries and continents. One day, in a dense fog, he crashes into a lighthouse, where a lovely girl named Madeleine lives alone. Amazingly, Madeleine is not at all frightened of the uninvited guest. Instead, she takes him in and cares for him, treating his wounds. So begins an unusual friendship between the monster and the little girl—a friendship that completely changes the dietary habits of a seemingly soulless and bloodthirsty human-meat lover. On the last pages we see an entirely different Yark: a monster who, thanks to a little girl’s love and trust, gives up child-eating altogether. The way to this difficult choice is paved with a series of events at the very heart of this story. 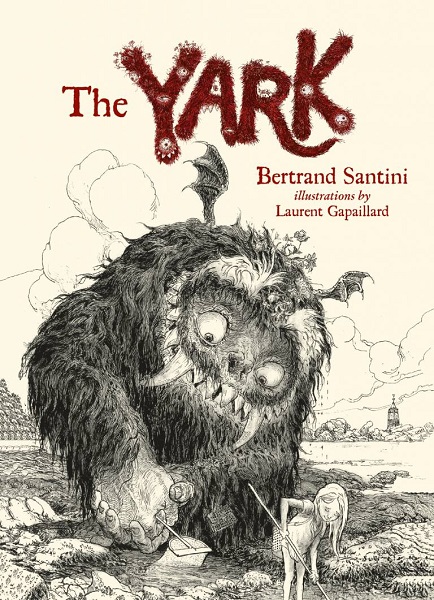 At first, it might seem like the main character, a cunning and merciless creature, represents complete and utter evil. But from the very beginning, the story of the Yark shows the young reader the shades of gray in a complex world, the interrelationship of good and evil, of naughty and nice, revealing the ambiguity of these concepts.

Take for example, Charlotte, an angel of a child. A sweet, polite, and clever little girl like her is the perfect dinner. The hungry Yark flies to her house and is just about to enjoy his food when—oh horror of horrors! The evening meal turns out to be well-read and well-informed. Charlotte knows that the Yark doesn’t eat bad children and she throws a heck of a tantrum. Terrible words like,  “poo,” “pee,” and “fart” pour from the cherub’s lips. Dolls are strewn about the room and teddy bears lie torn with their stuffing out. It all comes to a head when Charlotte starts taking off her pants with every intention of peeing on her backpack. The monster’s appetite plummets, and he flies off in terror without his dinner. Charlotte’s parents hear the commotion and come running in. They believe their daughter’s story and don’t scold her for the mess in the room. Still, Charlotte gets just a little sad when her parents tell her the monster won’t be back. It’s very hard to always be the perfect child, and even the best-behaved and psychologically stable child will need to let off some steam with bad behavior from time to time. How lucky that the little girl’s parents understood her well and spared her an interrogation.

An adult reader might well recall the good old classics—the story of the Minotaur, for instance. This unsavory character devoured young, beautiful girls. The Yark, too, prefers to dine on smart and well-behaved children only. This begs the question: what does the monster get, when he ingests the sublime? What if, in place of young women, he were offered an old man or an ugly girl to eat? The Yark’s author describes this restriction with medical precision: bad kids cause indigestion. Classic stories never give a specific answer to this question. But we could well assume that “evil” needs to regularly consume “good” (or beauty) to feel complete and sustained. The sweet little kids he eats seem to charge the Yark with their “good energy.” And when his love for Madeleine becomes a part of him, he realizes that his inner balance no longer requires him to eat children. The feeling that fills his heart is enough.

The characters of this book invite the child into the still hazy world of cause-and-effect relationships.

How often is a child subjected to the following reproach: “You’re a good boy, right? Good boys don’t draw on the walls.” (Or pee on the floor, or tear up their notebook.) That’s the moment when a child’s awareness reinforces a monstrous stigma: If I did something wrong, I’m bad. It’s a conclusion he’ll carry right into adulthood. The idea of “goodness” is inextricably tied to rules about behavior. And we adults don’t often take the time to look into the root of the problem.

In his lovely description of “wild” children, the author serves as a champion for the cruel, rude little punks of the world (though in the end he allows his protagonist to eat them). Naughty girls and boys weren’t born that way, argues Santini, but rather became that way as a result of particular events.

With a few broad strokes, he describes the reasons children end up in the strange place symbolically named the “forest.” This is where children become an angry mob. The individual story of each child there is subsumed by a general outline: “abandoned by adults.” We understand that a child can be abandoned in more ways than one, and not just physically. Not wanting to engage with a child’s life and interests, not understanding her needs and problems—this, too, is abandonment. The forest where the Yark ends up can be considered an allegory for the soul of the abandoned teenager. It’s a place that’s scary and intensely lonely. 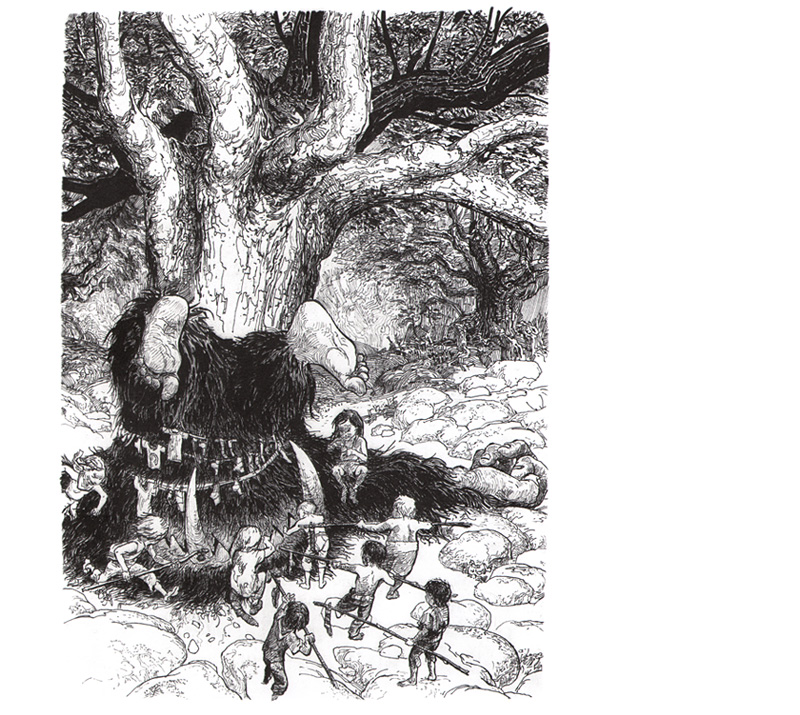 The Yark is torn over his decision to never eat children again. As though justifying it to himself, he thinks about how children become “bad.” As a child grows up, he starts to argue about when to come home, or whether to read books. He listens to loud music and neglects his hygiene. So what are the parents to do? They abandon the child in a deserted place.

Of course, it’s quite strange to see these rather serious and controversial ideas in a children’s book, especially a supposed horror story (those tend to be entertaining reads, rather than frightening ones). There are several similar points in the book and they all differ in style and depth, pushing adults into important dialogues with children. Parents find themselves facing a tricky challenge: on the one hand, they don’t want to place blanket blame on the adults in the story; on the other, they need to have a meaningful talk with the child about responsibility for one’s actions. The Yark, incidentally, takes this responsibility on himself when he decides not to eat any more kids, since he is now responsible for the safety of the girl he loves with all his heart. This act is a lovely example for a child, proving that it’s never too late to change for the better. And when you’ve done something bad, it doesn’t become your cross to bear forever.

Any horror story, especially one that has this many layers, can’t do without illustrations, and Laurent Gapaillard ’s pencil drawings perfectly capture the pace and feel of the plot. 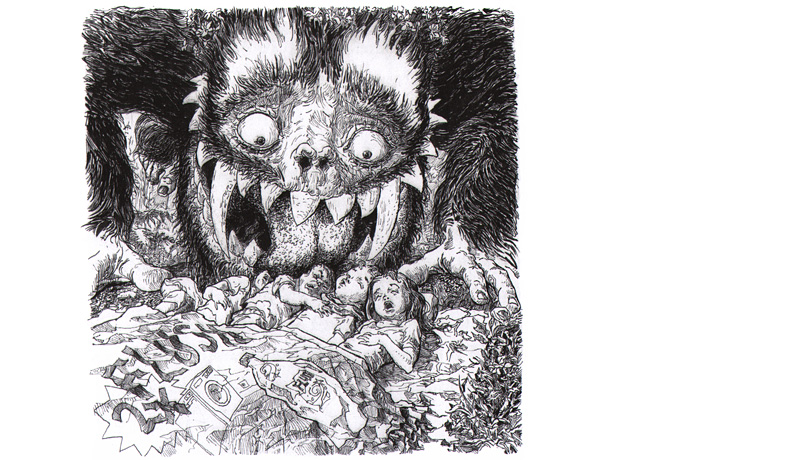 I imagine this story will be best and fully understood by the little readers who are lucky enough to read it with their parents. Not because it’s a scary book, but because of the many serious questions raised by the text.

Yulia Bebekher
Translated from the Russian by Alisa Cherkasova