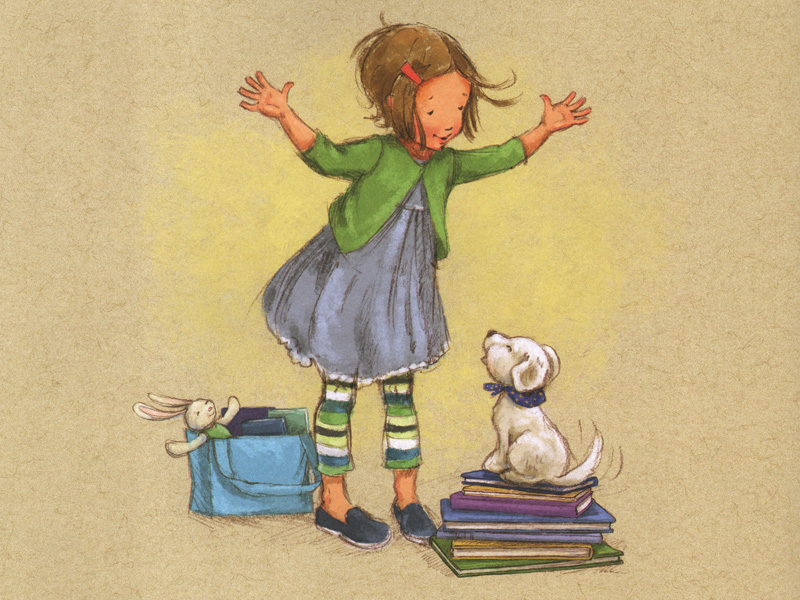 A picture book, even one without any text at all, is built on a story. Behind the illustrations, there’s always “text”—the story you can tell by following the pictures. By creating a book without text, an artist gives the reader the freedom to choose exact words and sentences, but the story is always “set”—in terms of structure and mood. Any great picture book is first and foremost a book with a great story.

As an author and picture book illustrator, Lisa Papp amazes me with this particular quality. Her first book, about a girl named Madeline who struggles to read, Madeline Finn and the Library Dog, impressed me with its ability to bring so much together in the space of one book. There’s the rather cruel realism of the situation: it’s clear that the child in question would have been instantly identified as “falling behind” in one of our schools. Then there’s the fairytale element: it will all work out! All thanks to a library dog that, with its typically canine humility and patience, is willing to listen to a halting beginning reader, just because she likes “everything human“ and enjoys listening to a person’s voice.

I wouldn’t be surprised if Lisa Papp’s story was based on true events: there are absolutely library dogs in real life. The realism of the story (it could really happen!) is  an irresistible selling point.

But the dog itself—so big and kind and white is, of course, a fictional image—a symbol of unconditional acceptance of any child.

The heroine and the huge white “accepting” dog meet in another book by Lisa Papp. Their friendship continues as the setting moves from the library to an animal shelter. Fittingly, that book is called Madeline Finn and the Shelter Dog [most recent English edition: Peachtree Publishers, 2019. ISBN 9781682630754]. 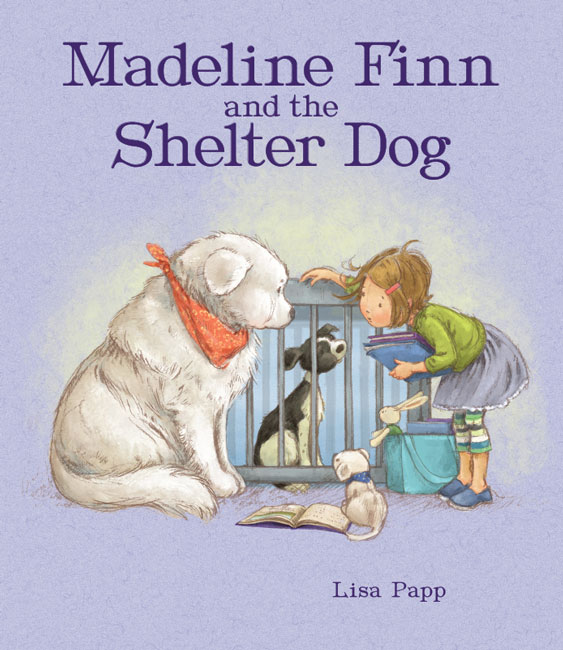 It turns out that Bonnie, the dog that taught Madeline to read, used to live in a shelter. That’s where Mrs. Dimple, the librarian, found and adopted her.

And so Madeline first learns about the existence of animal shelters. She learns that there are dogs and cats without owners or, translated into “people” words, orphaned animals. This discovery amazes her, worries her, and pushes her to do something.

The heroine’s need to act is particularly inspiring. Madeline decides to invite children to volunteer to...read to the shelter dogs.

Madeline’s idea—would you believe it!—surprises neither the librarian (essentially a perceptive psychologist), nor the reader: it seems entirely natural and logical.

After all, Madeline became friends with Bonnie by reading to her. Reading aloud is a form of communication. A child can offer an animal what she has. The animal hears a human voice and feels that it is being spoken to, and gladly “responds.”

Madeline puts together an announcement for the upcoming event. She writes out several copies, illustrates them, and hangs them up in the library: “Come read to the shelter animals. Bring a blanket and a book.”

The blanket is the material contribution to bettering conditions for the animals in the shelter. It’s a small, but powerful formula: “a book and a blanket.”

All this is Madeline’s first social project. The book doesn’t use such words, but the idea is clear.

The plot’s tension rises when nobody comes to the shelter except for Madeline, her mom, and Mrs. Dimple (with Bonnie, of course). Madeline decides to read to the shelter dogs anyway and (this is important!) read to each individually, rather than all at once. Still, after a while, she confides her doubts to a shelter worker. ”I don’t have enough books...Or enough blankets.”

We sense how hard this must be for her. Her plan now seems an impossible burden.

Sometimes you plan a social project and it doesn’t get the support it needs from others. The loneliness is draining. The reader experiences this horrid feeling along with Madeline, this sense of a doomed project.

“Then, I hear footsteps.”

And in walks a whole crowd of kids and adults. They were held up for reasons outside their control but now, finally, they’re all here, with books and blankets. A reader settles in by every dog’s cage. Nearly every pet in the shelter gets a new blanket. One sad little pup is the luckiest of all—he’s getting adopted.

And we understand that this is just the beginning. Now we know justice will win out in the end.

Just in case, I’ll add (for the adults who are suspicious of picture books and don’t consider them true reading material): there’s quite a bit of text in the story of Madeline and the shelter dogs. Plenty to read—and not just for dogs.