Fairy tales for toddlers are a special sort of story. They don’t risk descending fully into the thicket of magical adventures, their villains and wizards haven’t settled in for good, and the world isn’t yet strictly divided into black and white. These stories are only just beginning to hint at the transition from the real world to an imaginary one, reaching out toward magic. This reflects the possibilities of a child’s psychology, the level of development of a child’s imagination between the ages of two and four. 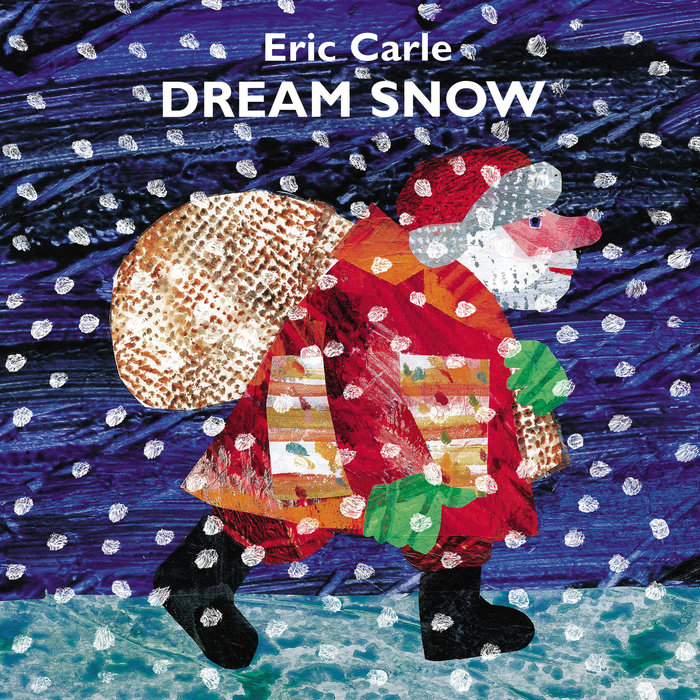 We tend to think of a child as a daydreamer, always coming up with something. But he acquires this “status” at about four years of age. Between five and six, his imagination, which isn’t held back by rationality yet, truly blooms. That’s when the child dives into the sea of magic fairy tales and fantasy novels. That’s when he asks unexpected questions and gives answers which we adults readily deem “children’s wisdom.”

While a child is still small, her imagination requires careful treatment, as well as enrichment in the form of the “right” stories (from a psychological point of view).

Eric Carle is a famous American illustrator, the founder of the Museum of Picture Book Art and a true genius of stories for toddlers. His book Dream Snow [Most recent English edition: Puffin, 2016. ISBN 9780141373706] is one excellent example.

In Dream Snow, as I’ve said, there are no villains, no conflicts, no confrontation. But we do have transformation and magic. There’s a sense of the miraculous.

The transformation concerns the protagonist, a farmer who becomes Santa Claus. But we don’t learn this from the text. Eric Carle doesn’t write: “Suddenly, the farmer turned into Santa Claus.” We’re simply told that the farmer “quickly...put on his warm coat, his warm boots, his warm hat and his warm gloves...slung a sack over his shoulder and dashed outside.” And here the artist takes over the narrative. In the picture, we see a veritable Santa. We (the toddlers) recognize him right away by a few telltale features: white beard, red coat, big boots, and a huge bag of gifts on his back.

So how did the farmer become Santa? He changed into the right clothes!

Here we have a sort of magic that is absolutely accessible to the child. He knows perfectly well that clothes change how we feel and how we move through the world. Clothes can demand something of us. There are clothes for holidays, because they are special occasions.

And—most importantly!—isn’t our preschooler also learning to dress up within his games, to dress up as one character or another, to “transform”?

In other words, it’s clear where he’s come from, this Santa with a huge bag slung over his shoulder. There’s no question whether he’s real. Crossing this line between the everyday and the magical is easy and natural.

The book also encourages the child to participate in the story. A button at the end of the book is marked “Push Here.” When you press the doorbell-like button, “magic” chimes ring—the sound of the holiday tree.

It’s funny that Eric Carle drew a regular tree, rather than a pine, with multi-colored ornaments decorating its bare branches. It looks almost as though the tree has been glued into the book—a basic appliqué.The ornaments are paper cut-outs, with a rough shape that suggest they were cut by a child’s small, inexperienced hand. There are long thick black strings on the ornaments—“handmade,” like the rest.

This, too, reads as a hint: it’s very easy for a child to make such a tree. Another invitation to participate.

This, of course, is not unique to Eric Carle. This invention is a well-known approach by writers for very small children. Each time the animals are named, the child unwittingly associates the number with the amount of animals (objects). She doesn’t simply repeat the names of the numbers as a learned sequence, she’s actually counting. At the end of the book, the farmer, just before his final act of magic, counts down, as for take-off: Five, Four, Three, Two, One! And, with that, Christmas is finally here.

The story even manages to incorporate the Whole Word method, sometimes used to teach children to read: all the presents under the decorated tree have little tags with the numbers written out.

And there’s another incredibly important subject (beloved by speech-therapists and teachers)—pets. We remember the animals were mentioned by name. It’s up to the child, clearly, to identify what animals they are. No easy feat, since the animals are “hidden” in the barn and all you can see of them are colored spots. This is a bit of intrigue that unfolds along with the story.

The farmer sees the animals in a dream. He dreams that they are all covered by a white blanket.

The blanket—a clear plastic page with a patch of white “snow”—is yet another of Eric Carle’s book engineering inventions. It’s a dramatic act—to carefully lift up and turn the page, and to find, hidden beneath, an animal in all its splendor! It’s an element of that beloved childhood game, hide-and-seek. Very young children love to hide under translucent cloth—they have the sense that they’re covered (and hidden) from others, while they can see everything around them. 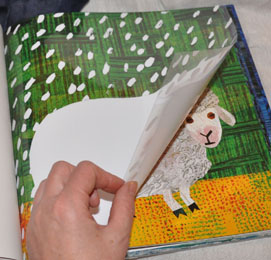 The animals hiding under the clear pages aren’t named in the text. It’s up to the toddler and her parents to identify them. It’s best to call these “additional” animals by name after the book is read, so as not to break the integrity of the story. The child will probably want to leaf through the book again, if only to peek under the film. As for dress-up: it’s another topic speech therapists love: outdoor clothes, winter clothes, the order in which we put on our clothes. The illustration is so expressive in showing the process of the farmer getting dressed, and where each article of clothing goes.

We could speak, too, of the conflicting colors in the illustrations, the particular role of white, as it engages with a warm red and other warm colors. We could speak of the way the book establishes white as a soothing, calming color, which extinguishes the hectic activity of day. All this comes as a particular—implicit—understanding.

In other words, no special “educational books” meant to “develop memory and attention” and who knows what else (the list of textbook psychological skills can be quite long), can compare in efficiency with Dream Snow, which teaches incidentally, effortlessly, occupying the thoughts and feelings of a child with the story and just the story—this wonderful story for toddlers.