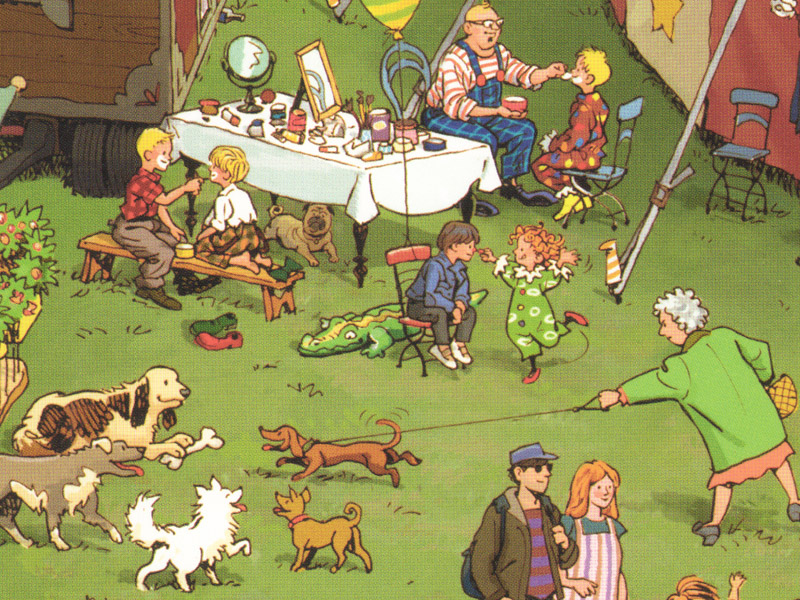 Our visual environment has noticeably changed in recent years. The visual field has infiltrated spaces we hadn’t even imagined possible. While videos seem a natural fit in advertising, comics about psychology and philosophy are a lot more unexpected. The new visual culture can’t help but be reflected in books as well, especially books for children. There are more books with pictures, that is, picture books, than ever. It’s not uncommon to hear specialists in children’s literature saying: “For a picture book, there’s too much text here!” And so it might seem that we are heading towards the disappearance of written text altogether. Does that mean that “traditional” parent-child reading too, is due for changes?

My grandson is two-and-a-half. I have watched how his parents read to him with wonder and interest.

At first I was amazed that such a small child could determine his own set of preferred books, but he chooses on his own what to “read.” Among his current favorites is Circus! This book has not been published in English, but here are a couple of titles that are similar in concept:
- In the Town All Year 'Round by Rotraut Susanne Berner
- The Big Penguin Party by Christian and Fabian Jeremies
- Time Goes By series


by Doro Göbel and Peter Knorr, a book that has no words at all.

The creators’ approach is similar to what Rotraut Susanne Berner does in her work. Each big picture in the book does not have one single focal point—there are many things happening here simultaneously. It’s hard to say which characters are central, and which are secondary. There certainly isn’t a plot. All the events and activities relate to the topic of “circus”—that’s it.

What do you do with such a book? It appears obvious: you should look at the pictures, examine them closely. Psychologists would say it develops children’s imaginations. It seems straightforward: this is a book for independent play, since it only has pictures. It doesn’t appear to require any special skills. So you can just open the book for the child and leave him with it....

That’s if the child is five, or better yet, six. But not with a two-and-a-half-year-old. Maybe there are kids out there who can sit and silently look through pictures on their own. But at this young age (and even later) books are, first and foremost, an opportunity to communicate with adults—a common activity, a shared experience.

A two-year-old child doesn’t know that the book about the circus doesn’t have words. She doesn’t know what the “written word” is. Even if you were to try to explain it, the understanding would be very superficial. However, the child does have some experience in interacting with adults around books: she looks at the pictures, while the adult “reads,” says words.

Such books have pictures that a child finds interesting to look at, but that doesn’t free adults from the responsibility of “saying words.” That is, the child needs the parent to speak. To say what exactly? Something tied to the picture they’re looking at. The parent must speak, speak of what he or she sees, build a story out of the picture.

As my daughter-in-law explained to me, the child will find the character that most interests him on his own. If he just got over being sick, of all the characters he will pick out the camel, who has a bandage tied around his throat. Before, he glazed over the camel when he examined the picture, and his eye fell on other characters. Suddenly, his new personal experience changes his “visual aim.” What does it mean then, to suddenly pick out a new character? It means to seek him out on other pages, to follow what happens to him, how things change around him. These books are constructed according to the principles of a graphic novel—a graphic novel for children.

The child-ness of it is in the topic, the particularities of the characters, and the way they are drawn: they are easily read, as are their actions and emotions and the relationships they have to each other. As for the structure of the plot—it’s an opportunity to follow, through each picture, the adventures of various characters or groups of characters (some are connected in close relationships and are pulled into common events).

A child follows the character with his eyes. At the same time, he follows his parent’s speech. It is imperative that the parent speak, even though it’s entirely improvised. This improvisation is unlikely to meet any strict literary standards. But it has something that highly structured, expertly edited literary speech does not—it’s living language. The child is a witness of its appearance in the here and now. Children learn primarily by example. What could be more useful to the development of their own speech than to show them how language lives? How it comes to be, how it names, defines, and explains what is happening? In this case, through a picture.

Yes, books like these don’t have words. That is not to say they have no ties to speech.
It’s just that there is a different connection, and a different method to the speaking. It’s storytelling.

It would seem this format begs the comparison to folk (not book) narrative. True folk narrative is also storytelling, also oral, not tied by the laws of writing or literary editing. Even so, a parent’s telling, guided by the picture, is a fundamentally different activity, if only because folk storytelling, though not recorded in writing, was based in traditional storytelling technique and not determined “here and now” by visual impressions. It wasn’t addressed to a specific child at a specific moment—that is, it wasn’t personalized. This individualized targeted speech is vital to parent-child interaction.

Spoken improvisation is also one way to teach a child to examine and understand images. It’s a way to teach one how to rationalize visual images—words, after all are much more rational than a graphic. We know this from our own experience. We need wall labels in art galleries, something to at least tell us the name of the painting. A naming in words is a point of support, jump-starting our perception. The title is a vector for perception. Generally speaking, to be told about the pictures one is seeing is critical for the inexperienced viewer.

The place and role of spoken language in today’s culture is clearly shifting. And yet the need to speak to a small child isn’t going anywhere. Culture naturally adapts to the new situation—it offers parents new meaningful occasions for conversations with their child, new opportunities to use speech—these picture books without words. Books without words are for the inexperienced viewer, often specifically a small child. As paradoxical as it may seem, one of the primary purposes of such books is to aid in developing speech.