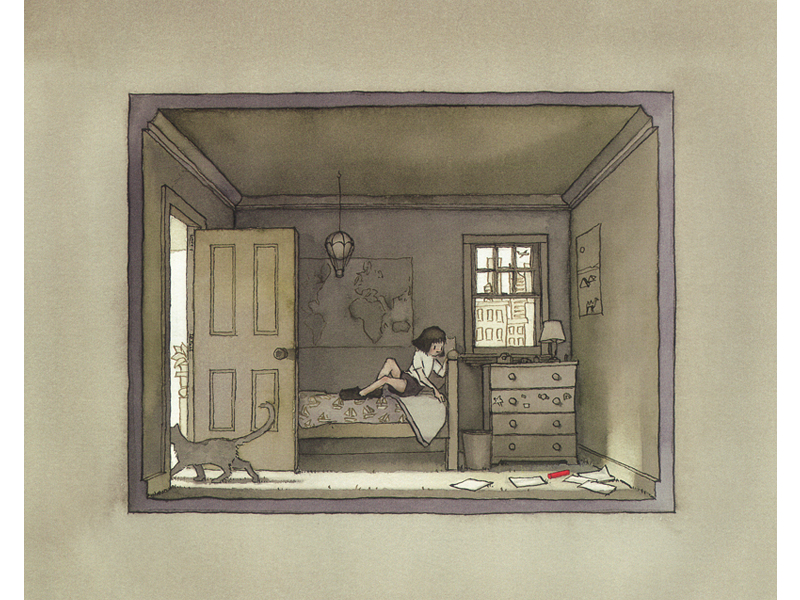 Aaron Becker’s first book, Journey, appeared in our household about a year ago. My youngest son, Platon, who was six at the time, showed no particular interest. He took a look, listened to the story his brother came up with, then left the book on the shelf. I was certain he’d all forgotten about it—but I was mistaken. When he saw the two newest books in the trilogy, he instantly remembered Journey [most recent English edition: Walker Books, 2014. ISBN 978140635534]. He arranged all the books in a row and spent half a day wrapped up in their pictures, all on his own, even shooing adults away when they distracted him from the book. He’d take in all the pictures then go back to the beginning, leafing through the middle, and talking through the stories he came up with.

Journey, Quest, and Return aren’t wimmelbooks, comics, or picture books (in the classic sense of the word). They don’t have a single word except the title. Each spread is like a separate chapter. The three books have a through-line of characters, setting, and plot.

The plot is a dramatic one. Journey opens with the main character bored and alone, parents too busy to bother. With a bright red marker, the child draws a door in the wall, and walks through it into a magic garden. 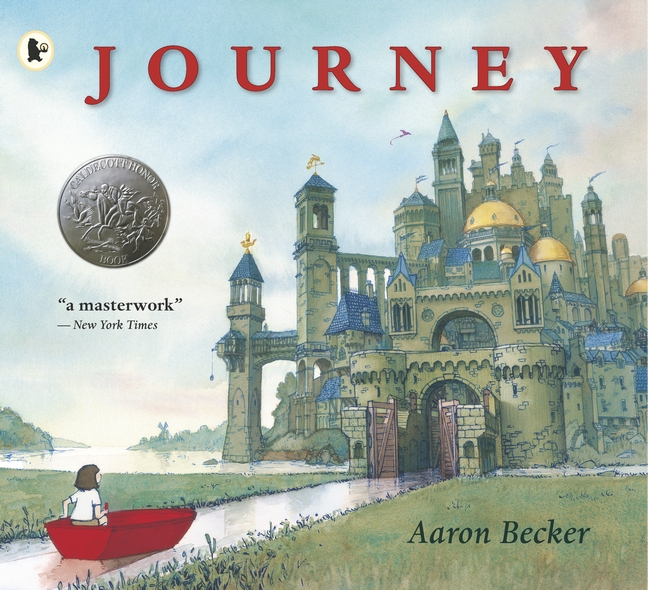 My sons are convinced that the protagonist is a boy. A friend of theirs (a girl) thinks otherwise. Which I feel is great—let them see the character as they want.

This hero (or heroine) is in all three books. In Journey, she uses her red marker to free a marvelous purple bird, which, on the last page flies into the hands of its owner—another bored child, a boy with a purple marker in his hand. 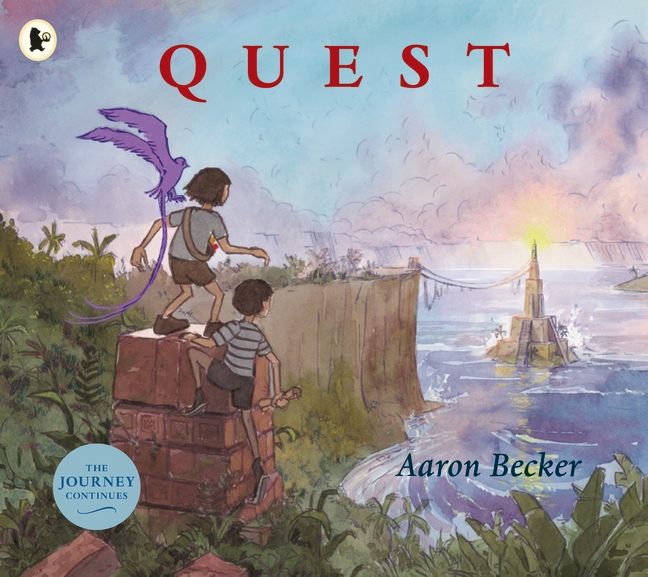 Quest [most recent English edition: Walker Books, 2015. ISBN 9781406360813] begins with both heroes, armed with their red and purple markers, receiving a mysterious map from the king. With its help, they are meant to find the other markers. In Return [most recent English edition: Walker Books, 2017. ISBN 9781406373295], the kids are joined by the father, who has torn himself away from the computer for a bit. 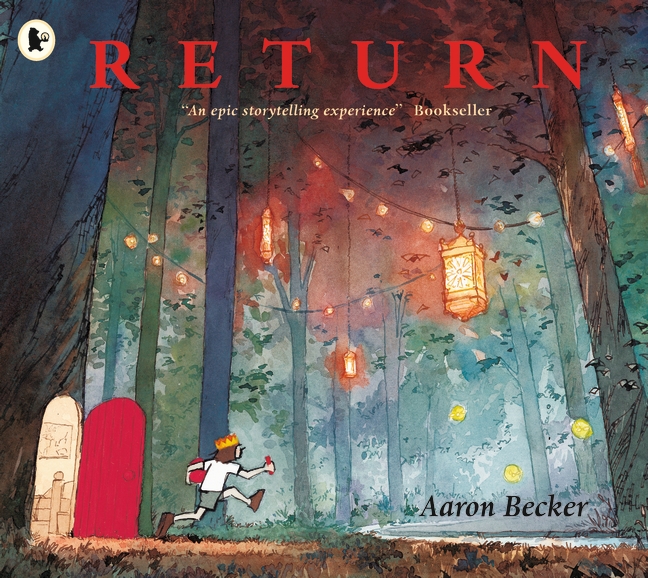 How do you read a book without words? Aaron Becker gives parents a few tips in his online reference, “Your Guide to Reading a Wordless Book,” where he recommends talking through the story as you discover it with your child. It’s all very well and good, and these suggestions are perfect for reading to small children—but what about those that are a little older? My sons are 7 and 10, and they don’t need my help in coming up with a story based on the pictures. The boys, especially my youngest, do, however, feel the need to share their stories. After listening to first, second, and even third versions, after examining all the details of the treasure map together, along with the guards’ weaponry, the features of the airships and sea ships—after all that I invited Platon to write out his story.

Platon’s in the first grade at school, where his primary task is writing. As a subject, writing elicits mixed feelings from him. On the one hand, it’s hard, and as a lefty he also works slower than others. On the other hand, he really enjoys it. He spends long periods of time working on his cursive exercises and his neat, nearly calligraphic handwriting earns well-deserved praise from his teacher. But for now, writing is almost exclusively a school affair. At home, he’s learning to type. To transmit written messages, he prefers to use pictograms, even drawing little invented symbols to identify the school subjects in his grade book (luckily, his teacher doesn’t mind).

At the moment, Platon doesn’t really get why he needs to write letters by hand. So I was met with bewilderment when I suggested he write down the adventures of the two kids and their colored markers. Then I propose he make the story the basis of a little play—a play needs a script—after all.

Platon had often seen me taking down the stories he’d come up with for our home productions. And it hit him: turns out he could do it himself. He did get tired almost as soon as he started writing—there were too many difficult words. So we decided to leave it at the titles for each part. He’d turn the book over and quickly jot down the main ideas.

When Platon was joined by his older brother, we had an issue. Each had his own title for the spread before them. What would we call the picture?

“Underground castle,” Platon insists and all his attention is focussed on the structure. He’s already counted how many floors are in the tower, noticed the missing or crumbling columns, and is trying hard to find the yellow marker.

“Octopus,” Leonid counters. He’s not particularly interested in the castle—what draws his eye are the kids in snorkelling masks and the huge octopus.

“Let’s call it ‘Riding the octopus into the underground castle’,” I propose diplomatically. But Platon isn’t having it.

“Who’s doing the writing here? Whose play is it? I want it to be ‘castle.’ You go write your own story!”

My oldest son is a big fan of The Adventures of Tintin, and I suggested he compare those books to Aaron Becker’s trilogy. We spent an evening deciding why Hergé couldn’t do without speech bubbles, while in Becker’s books words seem superfluous. I think Leonid was exactly on point when he said, “Where you don’t have words—you come up with a lot more yourself.”