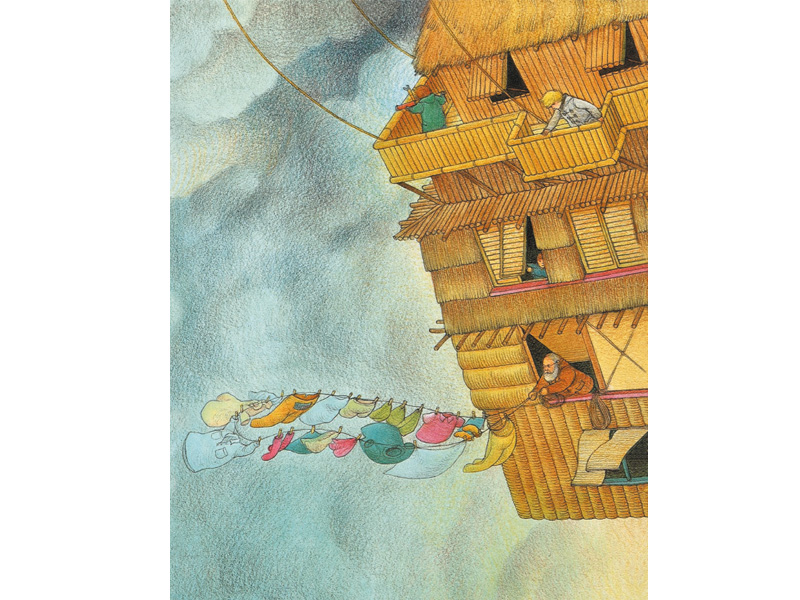 Somehow, as luck would have it, my kids have yet to read Gerald Durrell. We do read quite a bit about animals, especially the classics by Russian authors. Durrell, with his famous novels including My Family and Other Animals, The Overloaded Ark, A Zoo in My Luggage, and others seemed a bit advanced for a child’s understanding, an elusive peak, and I put the books off for when the kids got older. I figured the children would come to them on their own when they were ready. But recently, six-year-old Mitya and I got a book that captured his attention to the point that he dragged it around everywhere and demanded we read it to the very last page. It was The Fantastic Flying Journey [most recent English edition: Turtleback Books, 2002. ISBN 9780613824408]. Published in Russian translation for the first time, it’s a magical novel that tells the story of three children and their great-uncle as they travel around the world in a hot air balloon.

From the first page to the last almost everything that happens in the book obeys the laws of fantasy. That could be what drew in Mitya, who lives at the crossroads of three worlds—alongside his everyday reality are the magical fantasies so appealing to preschool-age children, and the world of adventure with its danger and feats of derring-do that he enters when he sits down to listen to the books his nine-year-old brother enjoys. All these worlds intersect in Durrell’s novel.

One regular day, twins Conrad and Ivan and their sister Emma are picking mushrooms in a field when a huge hot air balloon called the Belladonna starts to land right before their eyes. On it is the childrens’ great-uncle—a man they’ve never met with the peculiar name of Lancelot and an even more peculiar proposition. The idea is to set off together in search of another great-uncle, Perceval, who may have gone missing while studying gorillas somewhere in Africa. This gripping start immersed Mitya in the plot—he couldn’t wait to find out what happened next. Naturally, the missing great-uncle had moved on from the expected location and the children followed, hot on his trail.

Along the way they meet extraordinary animals. One of the twins tumbles from the hot air balloon, the other gets a snake bite. The plot grows ever more elaborate, with the details exciting a reader’s imagination. The Belladonna itself is a dream for a fantasy-loving child or traveling naturalist. The “basket” of the hot air balloon is a comfortable three-story house packed with life’s necessities, lit by electric eels and powered by diesel fuel made from the sap of the Copaifera tree. The house’s pantries are well-stocked, the second-floor has a garden and an orchard, and the third houses a library and research laboratory. “Mom, is all that true?” Mitya was quick to ask. As a young reader, he has, of course, no sense of reverence for Durell the world-famous naturalist author, but he is an avid and experienced reader of magical tales. The book’s characters communicate with animals in a typically magical fashion, using a magic dust that allows them to understand the animals’ “speech.” Mitya was loath to believe in electric eels and we decided to check the facts on Copaifera while we were at it. Turns out, eels do generate a powerful electric pulse, and Copaifera sap is much like real diesel fuel. Mitya found that unexpected union of fiction and scientific fact even more bewildering. That was, no doubt, the reaction the author was looking for. Old Lancelot (an eccentric and curious bearded and weathered traveler, much like Durrell himself) never tires of repeating that the world is full of marvelous questions that we can’t wait to find answers to. Durrell loves to give his young reader paradoxes to mull over, teasing the imagination, and surprising with the unexpected, to keep a child asking and seeking. And ask questions we did. 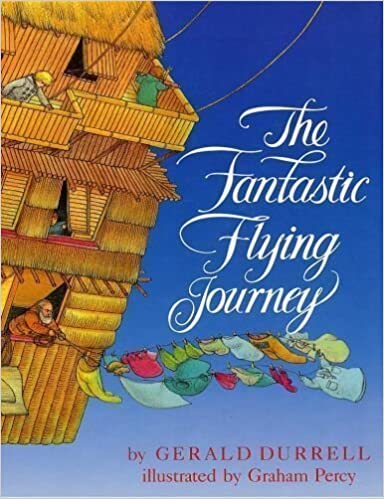 But here’s what’s interesting. The field notes Emma took on plants and animals throughout the journey were quite real and scientifically true. The family structure of African gorillas, the consequences of the mass extermination of bison by white colonizers of North America, how crocodiles raise their young, how tapirs avoid jaguars, the migration of tropical butterflies, facts about whales, elephant seals, penguins, and musk oxen…. The young reader watches a colorful, diverse picture of the animal world unfold before her on the pages of the novel, and the adventure-story format makes the experience a lasting impression. The child simply follows the plot, with no particular aim of learning, and so remembers everything. Graham Percy’s bright illustrations on nearly every page are an excellent visual aid.

We needed a map to follow along as the characters traveled the world: from England to the Sahara desert, with its camels and fennec foxes, to the banks of the Zambezi River, home to gorillas, then onto Australia and kangaroos, dingoes, and marsupial mice (Mitya hadn’t heard of them until The Fantastic Flying Journey). Then, with a magical ease, our protagonists zoom to the North Pole, the shore of a Canadian lake, and Mexico. They reach the Amazon River before finally making it back home to England. When Mitya and I read the book while on the road, I mentally thanked the publishers for including a map in the book’s endpapers, showing the key points on the journey. My children love books with maps—they make it all the more interesting to follow the plot. They often draw their own maps as they read or play and are good at reading the real-world map they will sometimes spread out on the playroom floor. So this was right up Mitya’s wheelhouse, and made him even more invested in the story.

Of course, there’s nothing special in wrapping the educational bits of a children’s book in magic-and-adventure—many authors do. But Durrell did so seamlessly, Mitya and I didn’t stop to think what was geography, biology, or literature. We were sucked right in. We even started watching the film based on My Family and Other Animals. I have a feeling one day soon we may make it to those Durrell novels I had set aside for “later.”

Elena Litvyak
Translated from the Russian by Alisa Cherkasova
This article was originally published in 2018.