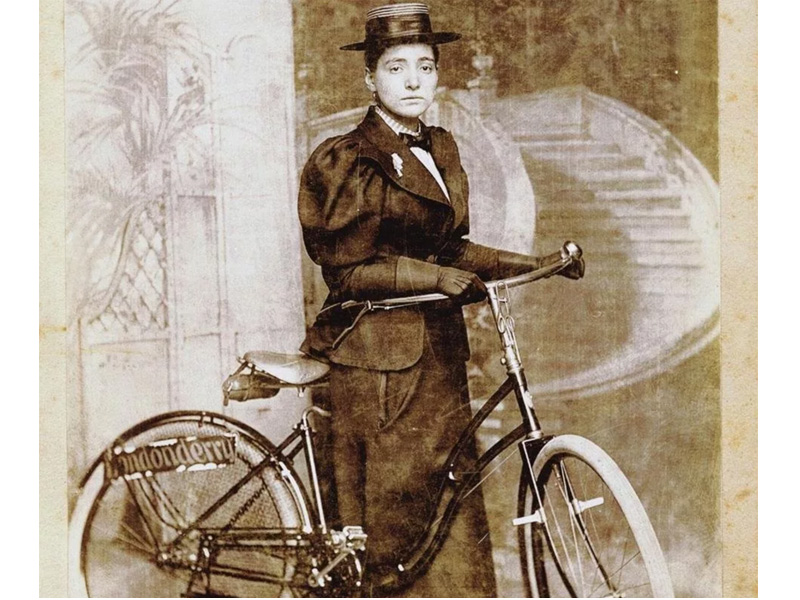 It was one of those books you pick out for yourself only to have it become one of your kid’s favorites. The graphic novel Annie: The Wind in Her Hair [Annie. Il vento in tasca. Written by Roberta Balestrucci Fancellu, illustrated by Luogo Comune. sinnos, 2019. ISBN 978887609408. The book is yet to be published in English] is a wonderful book that was unexpectedly accessible for a small child. My daughter Anya loved it. At only four, she was truly impressed as we read about a woman who traveled around the world on her bicycle. Anya drew pictures of her and rode around proudly on her bike with training wheels. If only she knew what it really meant for a woman in 1894 to travel around the world by bike in just one year! I was completely taken with Annie the character and Annie, the book, based on the true story of Annie Cohen Kopchovsky (1870-1947). 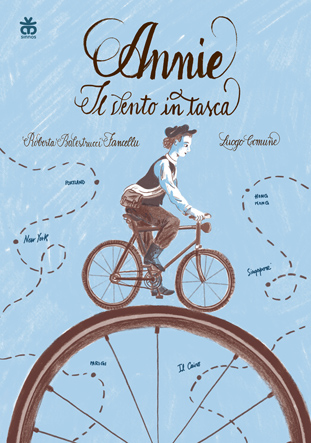 It’s 1894 in the United States of America. Twenty-four-year-old Annie takes on a crazy bet with two men and sets off on a round-the-world adventure on her bicycle. Starting out in Boston, she visits New York, Paris, Constantinople, Jerusalem, Bombay, and Nagasaki. She never once receives money from home. According to the rules of the wager, she has to earn her keep as she travels. She’s lucky, but you can’t get far on luck alone. Annie bravely withstands the trials that come her way: two prisons, a robbery, a broken leg, and an injury from an Indian hunter.

On the very first pages we get to know Annie as a little girl who crosses the ocean with her parents on a ship and settles in America. When she grows up, she meets her future husband. She teaches him to read in English and he teaches her to ride a bicycle. Together, they read Jules Verne and dream of adventures, even though they have three kids.

One day, Annie overhears two men discussing a round-the-world bicycle trip. “I can do that!” she exclaims and takes on a bet. She signs a job contract with a list of tough conditions. 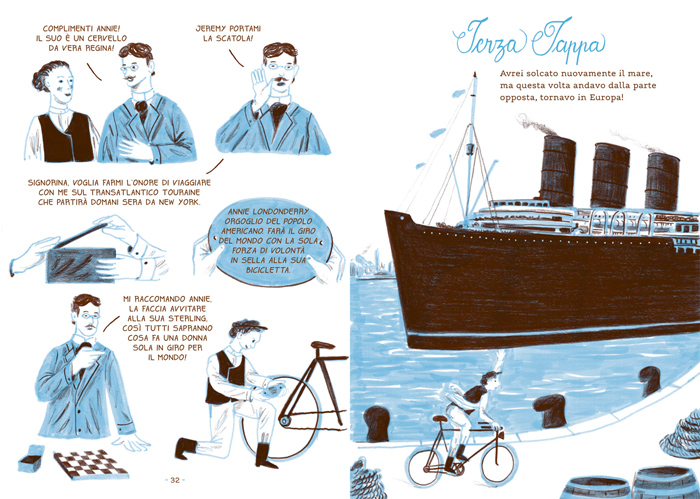 Anya and I discussed why these men might have chosen to sign on Annie. Anya offered that Annie might have spoken loudly. Yes, we decided, she probably spoke quite confidently, and not very quietly. She must have stood out because many women back then did not dare to take on brave adventures, especially women with children. We noted Annie’s decisiveness and fearlessness and the way she easily enlisted herself for this difficult and dangerous trip.

Annie’s contract included a condition that she couldn’t use any money sent to her from home during her trip. She intended to make money by selling photographs. Luckily, she was surrounded by businessmen who saw in her an interesting figure they could use for advertising. Not only did they buy all her pictures, but they offered that she become the face of the Londonderry spring water brand. A designer named Smith sewed her a comfortable bicycle suit and gave her a new bicycle. He named her first bicycle “Annie” and put it on display in his studio, as part of a successful advertising campaign for his women’s bicycle suits.

Anya and I noted how creative the American businessmen were and talked about why the designer chose to make Annie a suit for free and give her a new bike. By engaging with a personality like hers and helping to solve her problems, her appeal rubbed off on him, too. He came up with an athletic suit for women and in his shop window he showed off the bike that marked the beginning of one woman’s decision to travel around the world.

On her new bicycle, outfitted in a new suit with an advertisement for Londonderry spring water on her chest, Annie made it to New York City. But people there were not impressed. Women were horrified at her suit—back then only long skirts and dresses were considered proper. To them, Annie looked like she was crazy, walking around in her undergarments. Annie, for her part, needed to find money to buy a ticket for a ship to France.

Once again, she got lucky. Her new source of support was an American ambassador. He told Annie she was smart, free, and knew what she wanted. It was clear that only a free person would go against social norms and not care what others thought. (Anya and I discussed this.) The ambassador suggested he and Annie play a game of chess for money. Annie didn’t know much about chess, but she remembered that her grandfather had told her that you could win a game in three moves. Annie played and won the game, along with the money she needed for her ticket.

The ambassador gave Annie a plaque reading “Annie Londonderry, pride of the American people, will circumnavigate the world by bicycle.” He told her everyone should know what a woman like Annie could do when she put her mind to it. 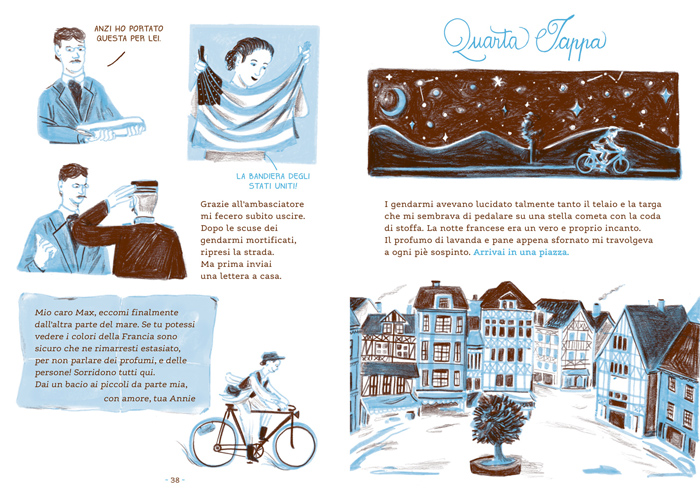 The transatlantic voyage took two weeks and Annie was always in the center of attention. She showed everyone the map with her planned route marked out in red pencil. (Anya enjoyed following along with this strong and free woman’s journey, drawing out her own maps and routes.)

Annie’s heart pounded with joy when she saw the crowd of people who had come out to greet her on the docks. “Annie, keep pedaling!” read the signs. Support from so many people gave her the strength to keep going. Now nothing would stop her!

But as it happened, French police stopped Annie almost as soon as she came ashore and took her to prison. Luckily, the American ambassador was able to help her again. (Anya and I had already come across the topic of prison in an earlier book, so I didn’t have to do much explaining.) 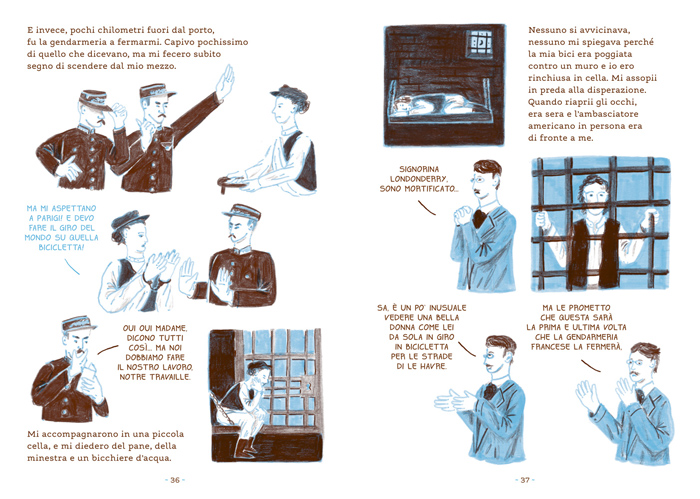 On one stop on her way to Paris, Annie met the artist Claude Monet. They became friends and agreed to meet in Paris, where Monet was heading by train. Annie soon found herself in the company of free artists. They had plenty in common and lots to talk about. Annie was a free woman with an iron will, a woman who’d proven she could independently travel long distances on bicycle. The artists, for their part, were free of norms for painting. Annie and the artists were united in their freedom from rules and their hopes for a new life, free from stifling restrictions. “Liberty! Equality! Fraternity!” they cried in unison.

Excited by visions of a great future, Annie didn’t sleep for two days. She was exhausted. Still, she set out on her way. But when she decided to take a break under a tree along the road, a bandit attacked her. As she fought him off, she injured her ankle and the wheel of her bicycle was damaged. Most importantly, the bandit made off with all of her money. Once again, she’d run into trouble, and her trip was in jeopardy.

I asked Anya if she thought Annie would go home to treat her injury. Annie’s goal was important to Anya too. The trip had to go on. Someone was bound to help. Anya and I discussed the situation and decided that Annie should definitely not give up at this stage of her journey. She needed to make her way to the hospital and find a way to fix her bike.

Luckily, two bicyclists picked her up and took her to the nearest city. A doctor came in to see her and told Annie she would need three days of bed rest. She didn’t argue—she had plenty of time ahead of her and she needed her leg to be in good condition. “She won’t make it far on an injured ankle,” said Anya. “She has to make sure it gets better.”

In three days, Annie was back on her way. She had to turn the pedals with just one foot, and rest the injured foot on her handlebars. No injury was going to stop her! Yet again, we marveled at Annie’s strength of spirit.

Once she made it to Marseille, Annie wrote two letters—one to her family and one to a famous female journalist who had traveled around the world. She’d decided to write to her at every stage of her journey, and soon Annie’s letters were a regular feature in the American newspaper New York World.

Annie got a camera as a gift and sailed to Egypt. The ship’s captain gave Annie a valuable piece of advice: he suggested she always try to blend in, especially now that she was heading to countries with very different cultures like Egypt, India, and China. This advice spared Annie lots of trouble. In these new countries, Annie didn’t try to prove that a woman could do anything. Instead she tried to remain inconspicuous and dressed either like a man or a local woman.

I tried to explain to Anya that there are different countries and different societies, which have different rules. It’s important to try to understand these rules and behave accordingly. We don’t act the same at Grandma’s and at preschool, right? At a theatre, people speak in a whisper and stay in their seats, while running and screaming are perfectly fine on a playground. You should stick close to your parents at the supermarket or in the subway so you don’t get lost, but at a gated children’s park or playground, it’s safe to run far and fast. (These are big issues for us these days. Anya doesn’t always know where she needs to be “grown up” and runs off in big stores, on escalators, or when getting off a train.)

In Europe, Annie inspired and won the admiration of many, though she did annoy followers of traditional norms. In Egypt, India, and China, she risked more than just being misunderstood—she could be arrested for her audacity. That’s exactly what happened in Hong Kong, where she briefly forgot where she was and started to photograph men working in the endless rice fields. Two soldiers appeared and decided she was a spy. A foreign woman dressed in men’s clothing, taking pictures? The soldiers had lots of questions for her. Annie’s behavior looked suspicious and dangerous. I didn’t get into all the details with Anya. I just told her that there were different norms in the country where Annie found herself and just in case, she was put in prison. She was jailed for quite a while. This time even the American ambassador couldn’t help her—she was too far from home. Only a letter to that journalist in the New York World helped Annie finally get out of prison.

A week later, a steamship from Japan took her back home to the United States. Annie was completely exhausted, but she’d completed her journey on time. Annie’s husband and children stood waiting to greеt her on the shore. Annie had tried to come back on her daughter’s birthday.

In the end, Annie made it to the final point of her journey two weeks ahead of schedule. It was a triumph! “I am a journalist and 'a new woman' if that term means that I believe I can do anything that any man can do,” Annie said later.

In the afterword, we read about Annie Cohen Kopchovsky, the woman the book was based on, and found photos of her online.

Anya truly fell in love with this book and asked us to read it several weeks in a row. At a children’s event where the kids were asked to draw their favorite thing, Anya surprised me by drawing the book about Annie. Meanwhile, her toy bunnies drew maps and cycle routes and traveled the world.