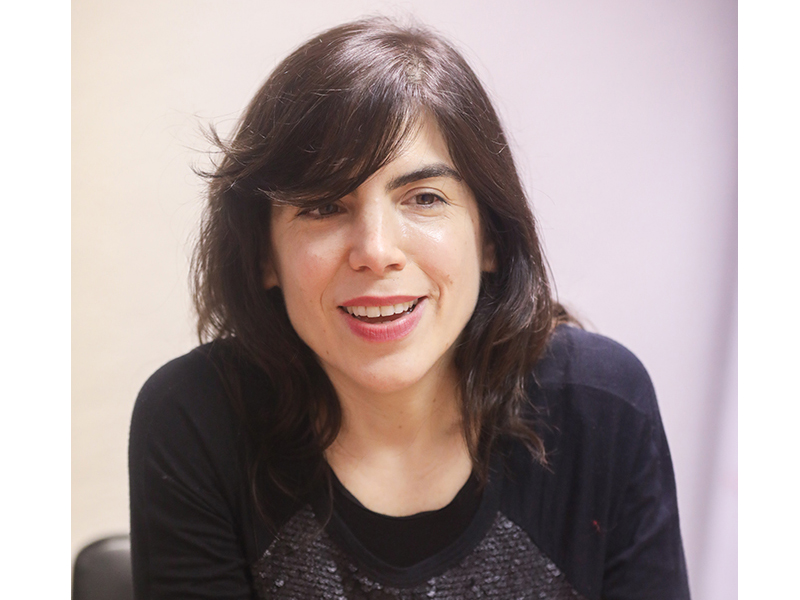 Isol (Marisol Misenta) is an Argentinean illustrator and writer. Though her work is still relatively unknown in Russia, she has won some of the most prestigious children’s literature awards, including the Hans Christian Andersen Award and the Astrid Lindgren Memorial Award. A couple years ago, at Moscow’s International Non/fiction Book Fair, Isol presented the Russian edition of The Menino, quite possibly the most unusual book about the world of babies and adults [English edition: Groundwood Books, 2015. ISBN 9781554987788]. Papmambook had already reviewed the book, but at Non/fiction we got the chance to speak with its author.

- Isol, tell us a little bit about how your book was received in different countries. Because Russian parents have had very different responses to it.

- Some adult readers are very uncomfortable with the fact that a children’s book shows the physical side of a baby’s life—a mother’s breast, pooping, colic, etc.

- Oh, yes, I got the same sort of feedback when we were getting the book ready for publication in the US. I was told no one would buy it because there were pictures of poop! But it ended up making the New York Times Notable Children’s Books of the Year. It’s good to take a fresh look at the topic of babies, even if that’s a new approach for someone. And that physical side is a big part of children’s lives.

- There’s an enduring taboo in Russia regarding “potty” stuff in children’s literature. There’s also this idea that childbirth shouldn’t be brought up for readers under a certain age, unless it’s a book for older teenagers or a children’s reference book on anatomy. Even then, the topic is touched upon only in passing. In your book, however, you lean into the subject, both in the text and the illustrations. Who would you say is your target audience?

- I think my book fits right in here. Not everyone has to like it. I don’t believe the text should be moralizing or educational. I don’t want to teach anyone and I never know who the reader of my book is going to be. Each book emerges as an answer to a question I have about life. And it’s great if it turns out someone else is asking themselves that same question.

- So The Menino is written primarily for new moms? Would you say the text can help a mom to come to accept her new role and understand her child?

- I felt very unsure of myself when I finished the book, but when I saw other moms’ enthusiasm, I was very glad I wrote it. My friends say I invented a new genre, “children’s literature for parents.” Kids really like this book and that’s so special for me. I think it’s very cute and funny when a child sees herself in The Menino and laughs when she reads the description of how her body and all her organs work. If she has a little brother or sister, the book can bring them together. You can read The Menino to very little kids, as well as those who are older. The book has several there for kids to get.

- I’ll confirm that: when my kids and I read your book, they laughed so hard, remembering what it was like to have a baby in the house. Everyone found something that they related to.

- Things weren’t all that fun in my life as a parent. When my son was born, I wanted to be a good mom, but he wasn’t sleeping all night. I was horrified when I heard other moms say that their children were sleeping soundly, because I thought something was wrong with me.

- There are babies who sleep through the night?!

- Now I’m certain there aren’t, but at the time I believed those moms and thought that it was just me that didn’t know what to do. But no one actually knows how to do these things. You can only feel it out with your heart.

- I’ve heard readers say that future parents, of all people, shouldn’t read this book. It might scare them off with its honest descriptions of those everyday difficulties and sleepless nights parents face. In marketing for children’s products, newborns are often depicted as sweet, rosy-cheeked cherubs, not quite what they’re really like and how you depict them—as these alien beings.

- I think that’s very bad, when parents and older children are shocked to run into something they didn’t expect. My book isn’t educational or informational—it’s more like a familiarization with a situation that’s new for everyone in a poetic, playful form. It’s a dialogue with the family about the miracle of a new person being born. There’s a separate message for kids here. They get a chance to appreciate everything they’ve already learned to do, everything they know. They forget that they couldn’t always run, smile, pick up small objects. Those things actually took them a long time to learn. Now, when they see a baby busy learning about themselves and their new world, they’re so impressed! People have forgotten how to appreciate these simple, wonderful things. Sometimes people ask me—how do you write books for kids? And I wonder, have people forgotten what it’s like to be a child? Adults feel this huge distance between them and their little ones, as though kids were aliens.

- I don’t feel that a little person is so different from me. I feel like I can imagine what a child is experiencing. At least, I try to remember my inner child.

- Why is it important for you to both write and illustrate your books?

- I like to illustrate the text literally, expressing all the shades of meaning in a phrase. I like the dialogue of the writer and illustrator inside me and readers can participate in that dialogue between the text and the illustration. The power of the image is that it holds so many textual meanings. For each of my new books I come up with a new approach for drawing. In The Menino, I purposely chose the simplest possible technique—thin, hesitant lines and strokes, as though someone is just learning how to draw. I wanted to show how a baby feels on the inside, just settling into this world, and not being able to do everything. Like all of us, children aren’t perfect, but at least they don’t hide it.

- Could you talk about why you chose the image you did for the cover of The Menino? There’s this huge mom and a tiny baby hiding behind her back.

- Early on, there was another version of the cover we considered, where I drew a mom, dad, and child. But it didn’t “work,” it didn’t convey what I wanted to and was too loaded with meaning. I prefer when a picture has less information and is more exciting and unexpected in its imagery—that way it’s more likely to stay with a little reader. I choose a lighter composition, just the mom and the baby. Of course, fathers are a very important figure in the family, but for the first few months of a baby’s life, the mom is its whole world. I remember those feelings very clearly, when you’re holding a new baby in your arms and you understand that you’re no longer the center of your own world, now you’re the best place in the world for this child. I tried to capture that feeling in the book. The baby on the cover looks almost like it’s hiding. After all, a baby is like a mystery for us to solve, a mystery for itself, and a mystery to us.


houseofanansi.com
Translated from the Russian by Alisa Cherkasova