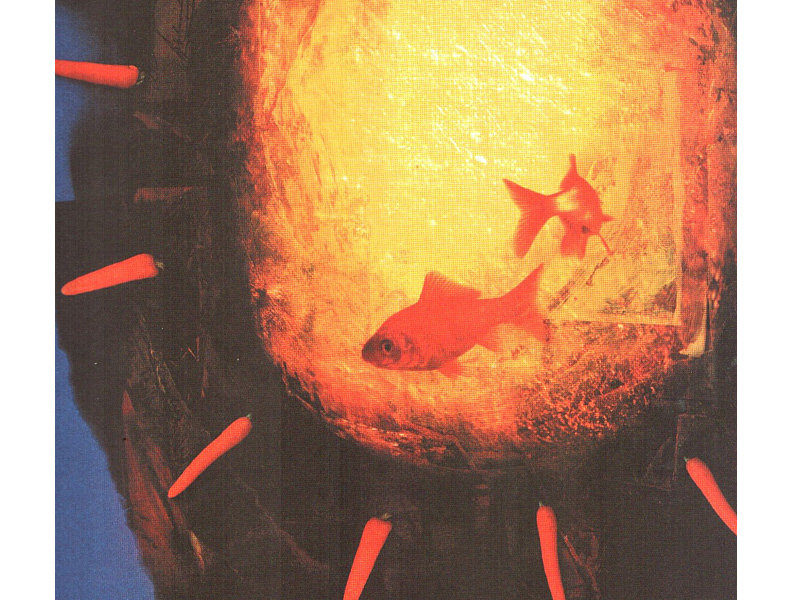 Among the books of well-known British writer Neil Gaiman is one called The Day I Swapped My Dad for Two Goldfish [most recent English edition: HarperCollins, 2006. ISBN 9780060587031]. The children’s book won the British Science Fiction Association Award for Short Fiction and was adapted into a play at the National Theatre of Scotland. There are a lot more questions than answers in Gaiman’s story, but it’s a great starting point for an honest conversation between a parent and any child over seven. If, of course, the parent is ready for that conversation.

Our narrator, a little boy, is at home with just his dad and little sister. There’s a lot of familiar love-hate sibling rivalry there: “My sister played with her Barbie dolls and I played at putting mud down my sister’s neck.”

What was Dad up to? “My dad sat in front of the television reading his newspaper.”

Then Nathan, the protagonist’s friend, shows up with an aquarium with two goldfish. It doesn’t much matter why he’s carrying an aquarium around. What does is that “they were very nice goldfish. They were reddy-gold and they swam backwards and forwards in their bowl.” 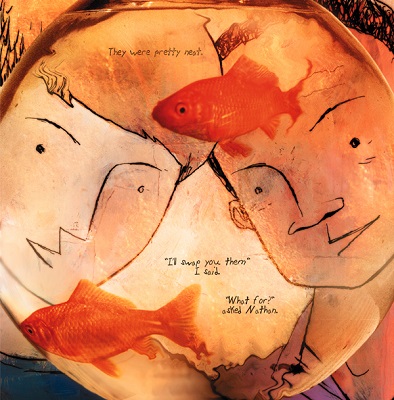 They start to haggle, but nothing the boy offers—even his penny whistle, which gives mom a headache, or Clownie, the clown he goes to sleep with—suits Nathan.

Finally, our narrator decides to trade his father for the fish. Nathan hesitates but agrees. After all, it’s just a dad for two whole fish…

The logic here is unexpected:

Some people have great ideas maybe once or twice in their life, and then they discover electricity or fire or space or something. I mean the kind of brilliant ideas that change the whole world.
Some people never have them at all.

Still, once the boy’s mother discovers that her husband is missing, he’ll have to figure a way to get his dad back.

All this is written very matter-of-fact, without any particular emotion.

The problem is that the dad has already been traded onward—for an electric guitar, a gorilla mask, and Galveston the rabbit. Dad was passing quickly from one child to the next.

What happened between father and son? How did it come to this? Did anything change in their relationship once Dad came home, back to the TV from his rabbit pen?

In his afterword, Gaiman tells us how the story came about, inspired by his son Michael: ‘I'd said one of those things that parents say, like “isn't it time you were in bed”, and he had looked up at me, furious, and said, “I wish I didn't have a dad! I wish I had…” and then stopped and thought, trying to think of what one could have instead of a father. Finally he said “I wish I had goldfish!”’

Gaiman just loved that idea–of course, dads should be traded for goldfish. It made perfect sense.

He could have gone on to explain the story by saying more about boundaries between family members or the clash of interests between children and adults. But I think the book effectively illustrates (illustrates literally, too) the crisis of human closeness.

What happens when we see someone as just a set of personal traits or professional abilities, and human relations become a trade where both sides want to profit?

People often enter into arrangements like these. When working as a team, they try to meet expectations others have for them while maintaining their own interests. It’s true of very different situations, even when you can choose your partner.

Even when it comes to love.

At the start of the book, before we’re even introduced to the characters, we see a series of ads. Like the following:

One halibut, must be in good working order, own fins, no skates please. Will swap two infants, one called Iolanda, one called Liam. Offers to Mr. David Tench McKean, Esq. c/o the Publisher

The book was designed by British artist, photographer, and comic book author Dave McKean (the one from the ad above), and the illustrations take the form of collages. The fish, for example, are “real,” while the brain coming up with brilliant ideas is depicted graphically, in cross-section.

The reader will notice that the book’s characters are somehow generalized, de-personified. Once you’ve read the book, you might not find it so strange that someone would carry around an aquarium with reddy-gold fish swimming back and forth. Like a metaphor for loneliness.