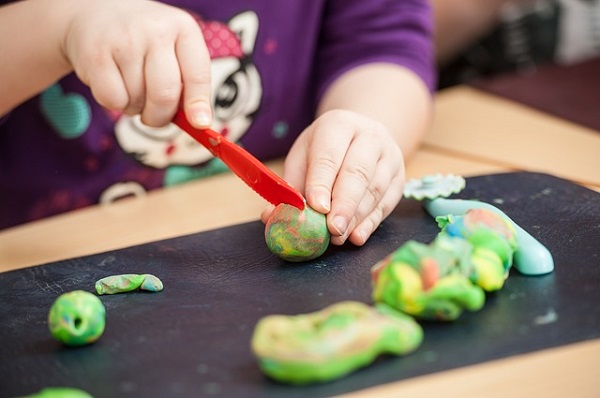 Teaching a child to recognize the shape of the written letters is a key step in teaching reading. Like folk songs and folktales, letter games and exercises pass from one teaching system or teacher to another until no one can quite say who first came up with them. The games below have all passed the test of time and should be useful to parents and teachers introducing a child to reading. We recommend them for ages five to six.

Use matches, sticks, pinecones, stones, or macaroni to form letters on the table, the floor, or the ground. You can also “draw” letters using a handful of sand, or grains poured from a paper cone. Think of a fitting name for your alphabet: stone letters, forest letters, macaroni letters. Come up with a story about who might have needed to use characters like these and why.

One player places a long thick rope down on the floor in the shape of a letter. At the signal, the other players try to walk on the letter without slipping off the rope. Add difficulty to the game by asking players to walk letters with their eyes closed and try to guess the letter. The child that names the letter and doesn’t slip off the rope is declared the winner.

Bake letter shapes using salt dough. Paint them and hang them on a “tree of letters.” Use your tree to play “Go Where You Will” (below).

Go Where You Will

Choose a king or queen. Have your royal sit on his or her “throne” and tell one of the players: “go where you will, bring what you will.” Then the king closes his eyes while the chosen player picks a letter off the tree.

The player comes back and says: “I bring a gift from the tree, king: guess the letter without peeking!”

The king takes the letter in his hand and tries to guess which it is through touch alone.

Players can also bring the king the letters of a word and lay them out in order. The king feels the letters and guesses what word they spell.

A Letter in Relief

Use playdough or modeling clay to form letters, then use them to decorate family crests, knights’ shields, or fairy tale castles. Let kids come up with stories about the character—knight, wizard, or princess—with that crest on the gates of their castle.

One player writes part of the letter and asks the others what letter he’s thinking of. Whoever guesses correctly writes the rest of the letter. This game is great on paper, chalkboard, whiteboard, the sidewalk, or sand.

I can’t see the letter, but I can feel it

One player uses their finger to trace a letter on the other’s back for her to guess. If she guesses correctly, the players change places.

You can also play as a group. One player stands with his back to the others. Another child chooses players and tells them which letters to trace on the first player’s back for him to guess.

Letters in the Sand

Pour fine sand (or a fine grain like Cream of Wheat) into a small tray with a high border. Have kids take turns drawing letters in the sand or grain.

One player puts a letter down on the table—upside down. The other players guess which letter it is.

You can make the game harder by laying out several letters at a time, or laying out a whole word for the other players to read upside down.

Children get cards with mirrored letters (reversed so you can read them only by bringing them up to a mirror). Make the game harder by writing out entire words on the cards.

Split the group into two teams of two or three people. Roll out two long, thin sheets of paper (strips of wallpaper or the like) side-by-side. Write a very small letter in the lower-left hand corner of one side, and a very large letter in the lower-left hand corner of the other side. One team needs to “grow” their letter by writing it bigger and bigger all the way down the paper, while the other team writes their letter smaller all the way down the sheet. The team that writes the most letters in the shortest time is declared the winner.