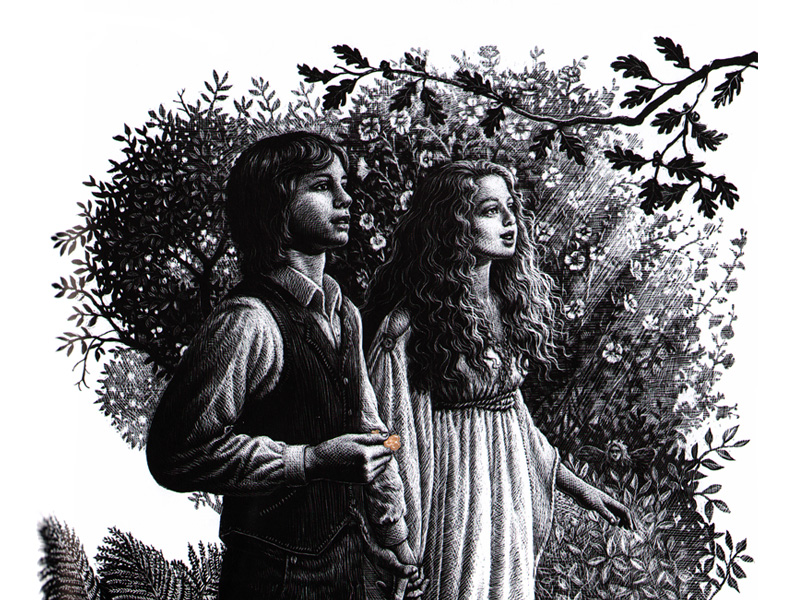 When I told the boys that we’d be reading a new book by George MacDonald before bed, they gave a joyous shout. “Goblins!” they exclaimed. “Battles! Transformations! Will Curdie be there? And the princess? And Grandmother?” I had to remind them that the story about the princess and the goblins ended in the second book and its protagonists, having lived a very full life, died at the end of the book. So what we had in store was not, in fact, the sequel of a beloved story, but an entirely new work. Though, to be fair, it was also a fairy tale. And also by the same author.

But there were more coincidences there. The boys were overjoyed to find Grandmother at the very start of The Golden Key [one of the recent English editions: Eerdmans Books for Young Readers, 2016. ISBN 9780802854568]. Okay, she wasn’t the same magical-mysterious Grandmother from the other books, but perhaps she was even more mysteriously magical, than the eternally young (and nearly always invisible) occupant of the castle in The Princess and the Goblin. 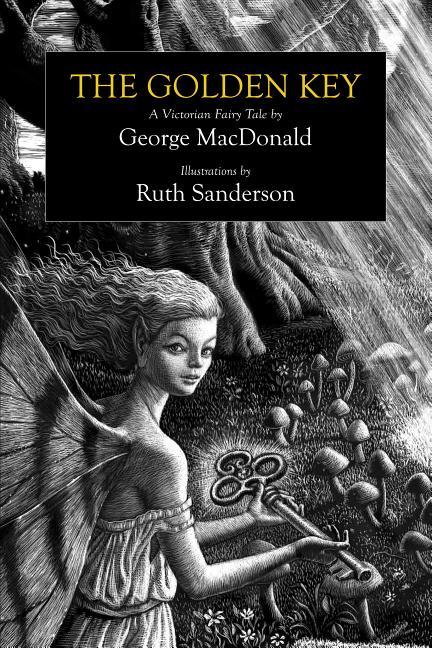 The magic characters in The Golden Key are not so clearly defined. This fairy tale, in contrast to the two novels about the princess, is more symbolic and metaphorical, full of enchanting images that are impossible to definitively interpret.

Not that my boys didn’t try. When Mossy (one of two main characters) finds the golden key of lore at the end of the rainbow, Ivan and Aleksei called up all their readerly experience to try to think up what the key might open. When Mossy falls asleep in the forest as Tangle wanders in the woods, the boys were in constant expectation of Hobbit-style “bloody scenes” (now they’re going to run into someone who’ll want to eat them…or take them captive…or at least fall down a hole). Their predictions very nearly came true when a strange tree grabbed Tangle (“Whomping Willow!,” said my Potterheads). 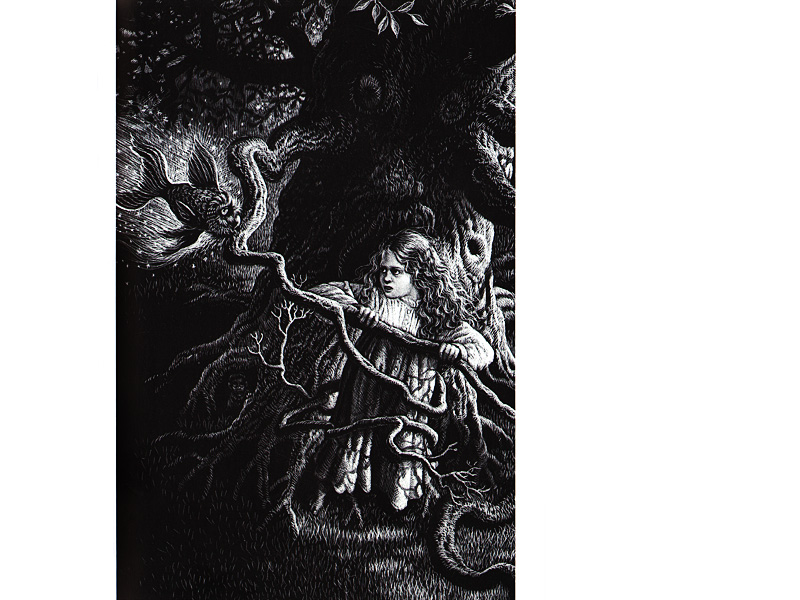 The boys held tight to their literary associations, even when an incredible air-fish flew into the tale. The fish completes its mission of bringing Tangle to Grandmother, then throws itself into a pot of boiling water so that the girl can eat it. (“Of course,” said Aleksei knowingly. He and Ivan recalled another story where the groceries dream that people will eat them, because that’s “what they’re meant for.”)

It was only when the narrative acquired a truly wondrous melody—the idea that the time flows according to different laws in the world Tangle and Mossy find themselves in—that the boys gave up. They no longer cared to be sharp and shrewd readers, with a “key” to every new character.

They cast off their past experience as readers, letting go of their fervor for reading into the allegories and finding hidden explanations. They sat very still and listened to the words, simple at first glance, but with a depth of complex meaning:

"But now," she went on, "I must get you washed and dressed, and then we shall have some supper."

"Oh! I had supper long ago," said Tangle.

"Yes, indeed you had," answered the lady,—"three years ago. You don't know that it is three years since you ran away from the bears. You are thirteen and more now."

Tangle could only stare. She felt quite sure it was true.

It’s not that my boys hadn’t ever encountered literary “tricks of time”—that’s a common theme in fantasy novels. Even in fairy tales “real world” time and “magic” time often don’t coincide, which is why a storybook mother, for one, may not notice that a child has been missing for many days-weeks-months-years. She might think that only a few minutes have gone by, if not less time.

But it’s this theme of quickly and imperceptibly flowing time in MacDonald’s novel that completely captivated my boys. They held their breaths as the story’s characters suddenly got old or became young young, when it would turn out that while the heroine completed a simple task, another several years had passed….

Why did this grab them? I think the boys intuited that this was what the story was actually about. About the passage of time, about life, full of a quest for that One Thing that it’s all for. (All through the book, Mossy first searches for the Golden Key, and then, along with Tangle, the lock that key, and finally, the “land from which the shadows fall.”) 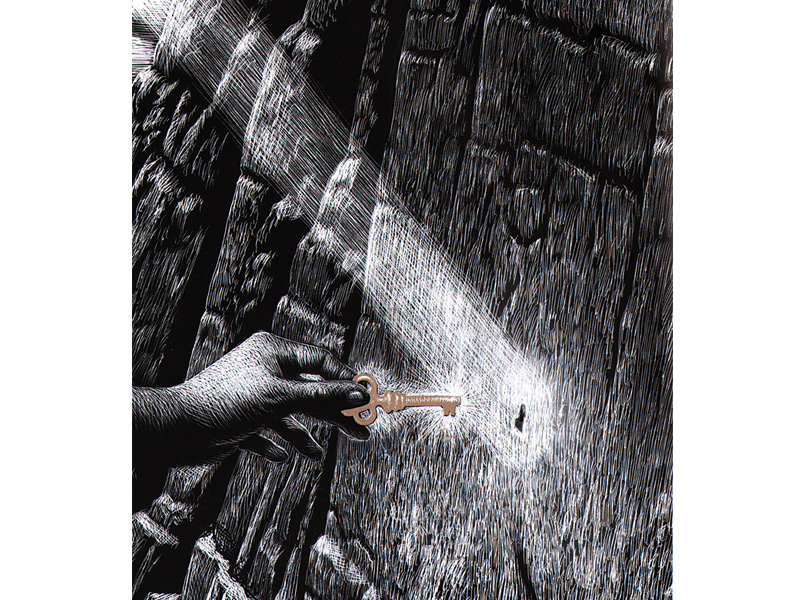 MacDonald beautifully ties together two images: when Mossy is just beginning his quest for the Golden key, he sees that there are beautiful forms moving up through the colors of the rainbow and when his and Tangle’s earthly quest is completed, they are themselves carried up the rainbow.

Of course, George MacDonald was a minister, so there is certainly Christian subtext to his magical tale and that may be one of the keys to understanding it. But The Golden Key is wider and deeper than a simple allegory. The Old Men of the Earth, the Old Man of Fire, and the Old Man of the Sea are such captivating characters, full of deep allure. They so astounded Ivan and Aleksei with their monumental and mysterious nature, that it didn’t even occur to me to tell the boys that some critics interpreted the Old Men as the Holy Trinity. When, and if, the time comes, those metaphysical meanings will settle into their understanding. For now, MacDonald’s magic symbolism worked powerfully and irresistibly and needed no “supporting” comments. It was very unusual to watch how the boys silently took in the story, not trying to interrupt the rhythm of narration with the clarifying questions that are so common to our bedtime reading. Usually, my sons are relentless in their pursuit of details they don’t understand (“I don’t get why he went there,” “No, wait a minute: why didn’t she let him?,” and so on) But this was magic: for nine evenings we immersed ourselves in the world of mysterious characters and enigmatic happenings that even I sometimes struggled to understand, while Ivan and Aleksei just sat still and listened, as people must have listened to bards and epic poets in centuries past.

The illustrations of this particular edition are worth a separate mention. They’re the work of Ruth Sanderson, who fell under the spell of MacDonald’s fairy tale and carried the story in her heart for years, imagining how she might bring it to life through illustration.

And she finally did.

You can look at those black-and-white drawings forever.