I was instantly taken with the cover of Nightbooks by J. A. White [most recent English edition: Katherine Tegen Books, 2018. ISBN 9780062560087]. You peer through a keyhole at a huge tower with billions of books, while a spiral staircase winds upward, promising a world behind each of the tempting covers. I just wanted to crawl right in there, after the boy standing at the foot of the stairs. 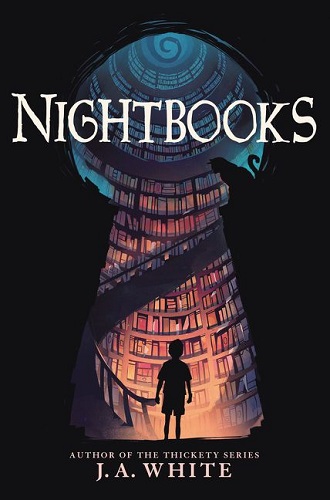 This time, I entered the world of Alex Mosher—a freak, loser, and weirdo. That’s how he sees himself. Everyone’s got issues and Alex is no exception. He looks like the average boy, a bit on the nerdy side, but who would ever think that he’s into creepy clowns, monsters, and abandoned cemeteries. Alex comes up with his own scary stories, which he writes down in his “Nightbooks” after dark. But scary stories are all very well and good until you’re trapped by a witch, who makes and sells magic essential oils.

The story begins with Alex wanting to be “just like everyone else.” And for that, he’ll need to get rid of what makes him a weirdo and start by burning his Nightbooks. So one night Alex heads to the basement. But there’s a magic apartment at the end of the hall on the fourth floor that just draws kids in. It attracts them with things they like—smells of good food, sounds of movies, or a unicorn riding the elevator. That’s how Alex ends up at Natacha the witch’s apartment—he hears the soundtrack from “Night of the Living Dead,” the first scary movie he ever saw, back when he was four. Children who end up in Natacha’s apartment have to do all of the dirty work. Anyone she can’t use is turned into a porcelain figure and put away in her big old cabinet. Alex’s Nightbooks save him from this fate. The apartment feeds on scary stories, and every night he reads Natacha one of his tales.

Alex meets Yasmin, a girl also held captive by the witch. Natacha makes her take care of the nursery, where she keeps the magical plants she uses to make her enchanted essential oils. At first, Yasmin doesn’t even want to speak with Alex—she’s afraid of getting attached. After all, Natacha has already taken three of her friends. But in the end, she gives in.

As the kids become friends, they decide to run away together. That’s no easy feat: Lenore the cat is keeping a very close eye on them and she can turn invisible. Plus, the work the witch gives them takes so much time. And then there are all of Natacha’s little secrets, which they have to figure out.

Then, the two captives get help where they least expect it. For many years, Lenore endured cruelty at Natacha’s hands. She dutifully reported on the kids and everything they did while the witch was away. But good is stronger than evil. When Yasmin and Alex help Lenore and treat the wounds that Natacha never cared for, the cat decides to help.

And finally—they escape. This is a real happy-ending fairytale!

What I like best, though, is how deeply Natacha, the villain, is revealed in the book. You can’t help but sympathize with her once you learn what she’s been through and how that’s made her the way she is. She wasn’t always a wicked witch. Twenty or so years ago, an ordinary little girl named Natacha was sitting on a playground, waiting for a friend. Then, suddenly, a real unicorn walked right by her! She just loved unicorns. No, of course, she didn’t believe in them, she was too big for that, but still….The unicorn walked into a building, got into the elevator, and went up to the fourth floor. Naturally, Natacha followed. Together, they walked into the apartment, and then the unicorn disappeared and the door locked and vanished. That’s how Natacha fell into the trap of a real witch!

For many years, the girl worked hard and did everything she was told, without losing hope. But there’s a limit to everything. Now I think that every villain must have a moment like that, one that divides her life into “before” and “after.” For Natacha, that was the day she spent in the tiny dirty oven she had to clean until it shone. A little girl got into that oven, and a witch came out. A witch with one clear goal—to kill the witch who imprisoned her. After all, you can’t do evil and remain untainted. You can’t kill evil, for when you kill, you let that very evil put down roots in your heart.

A couple years ago, Papmabook ran an essay contest with the prompt “My favorite villain.” At the time, I didn’t participate and I wondered how you could even have a favorite antagonist. I couldn’t think of anyone to write about. But now I know for sure what I would have said in that essay. I’ve found my favorite villain.