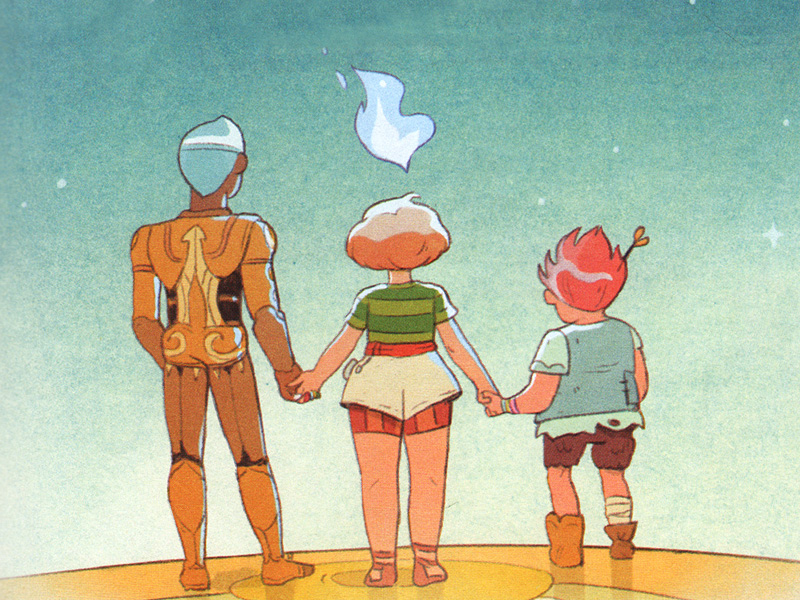 If there’s a drawback to graphic novels it’s that they’re hard to read together. You can, of course, but it’s not as convenient as reading them alone. So it made sense that when I brought home 5 Worlds. The Sand Warrior [most recent English edition: Random House Books for Young Readers, 2017. ISBN 9781101935880] my son carried it off and didn’t give it back until he’d read it cover to cover. 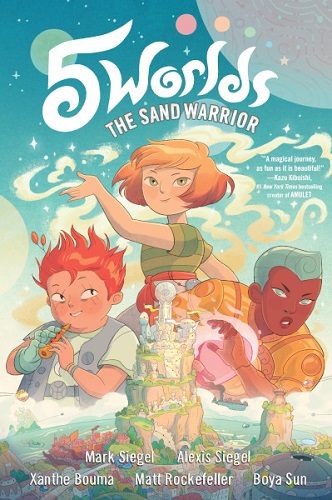 “It even looks like a real book,” said Matvey, knocking on the hard cover.

“What other kind of book could it be?” I asked, surprised.

“You know, like regular comics, big and thin. This one’s a book! Look at all those pages.”

This was true—there were a lot of pages. I wasn’t even sure at first if Matvey would get through them all. I, for one, have trouble taking in a lot of visual information. I’m used to words, not pictures.

He read a page aloud to me, bringing it to life with his voice. It was cool to see Matvey using the depictions of the characters to come up with distinct voices for them, raspy or clear, high or deep, loud or quiet. I thought that it was somehow like dubbing, but dubbing you could change with every run-through. I noticed that the colors of the illustrations, too, changed to match the narrative: calm tones in times of peace, and violent cherry hues in times of battle.

The story itself was pretty complicated.

“How do you understand anything?” I asked Matvey on the tenth page. “I’m totally confused, and I have no idea who’s who or what’s even happening.”

“It’ll pass,” he says, nodding reassuringly. “I didn’t understand much at first either. And then it was like—Bam! It all came together.”

The funny thing is, that’s exactly what happened. At some point toward the middle of the book, it hit me. The ability to “get it” quickly probably comes with reading a certain number of graphic novels. I don’t have much of that experience yet, but Matvey is already quite the expert. He was able to remember the names and comprehend the storyline well before I could.

Meanwhile, I was relying on Matvey to clear things up for me.

Matvey answered patiently. He told me about the sand dancer (“just like me at the beach, remember?”), the beacons which need to be lit (“why haven’t we ever been to one yet?”), about the tokis (“They’re the ones from Tokyo, right?”) and so much more. 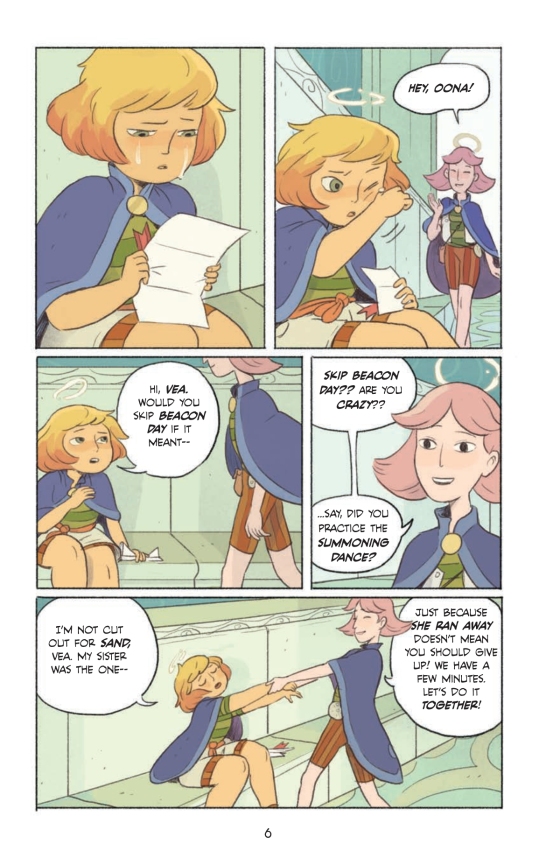 It was great having Matvey’s explanations and commentary, not least because I could see what he was seeing.

“The main issue,” Matvey was saying, “is that Oona Lee doesn’t believe in herself. She always thinks that things won’t work out for her and counts on her sister, who disappeared a long time ago. That’s never a good idea. You can’t just rely on someone else.”

“Of course. But I take tests on my own.”

It seemed like the whole story within the book was a bit like a test for Matvey. It was an obvious “battle,” which he was winning on his own. Oona Lee is a sand warrior, saving the world along with her friends. Matvey is a warrior of the pen, defending the honor of the class before the teacher and principal of his school, along with his classmates.

We both liked that analogy. Now Matvey isn’t just any school student—he’s a real warrior. Why not? Just try to survive in the world of numbers, x and y variables, spelling, and punctuation!

“You’ve got to believe in yourself,” Matvey reminds me. “And your friends.”

As we thought about how each character has their own superpower, Matvey said it’s just the same with his friends.

“Stepan is really good at volleyball, Max is the best drawer, Kirill gets straight As.”

We decided that’s not easy, either. It’s not just anyone that can be a friend, supporting and understanding others, forming a real team, even if you are all from different worlds, just like in the book.

“There’s something I still don’t get,” said Matvey, when I closed the book. “Is this the end or not?”

“I think it’s just the beginning,” I said, smiling.

An Tzu still has to be cured of his vanishing illness. And we need to figure out what actually happened to Oona Lee’s sister and light all those beacons!

Matvey nodded, then suddenly pointed to the ribbon bookmark in the book.

So I’ll mention it now—it is a very handy bookmark, after all.