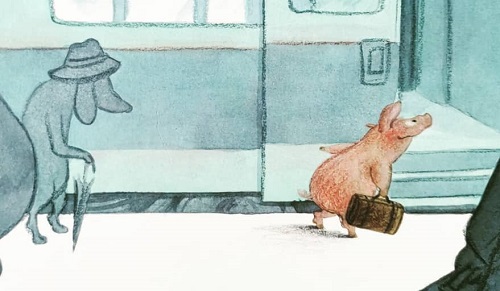 When Matvey was still little, one of our favorite things to do together was to draw stories. But in the end, these visual narratives always turned into chaos instead of artistic masterpieces. This is because the heroes needed to move across the page, and their poses and surroundings were constantly changing. Things were always being added to the background, dreamed up as our stormy imagination took its course. All Aboard with Johanna! by Kathrin Schärer is much less chaotic [most recent English edition: Officina Libraria, 2013. ISBN 9788897737094]. 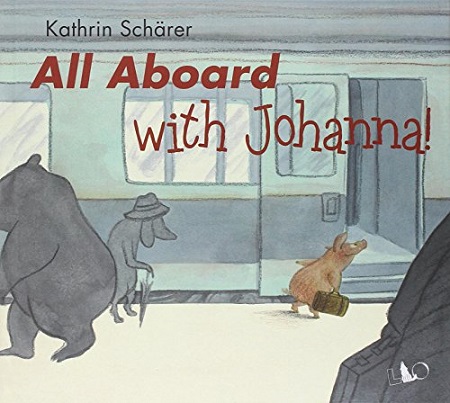 “And how did she manage that?” I asked Matvey when we started looking at her illustrations.

“It’s because she doesn’t draw everything on one page,” Matvey replied, justifying our artistic insanity, “We should do that too.” And he wisely flipped to the next page.

A special feature of this book is that the protagonist, a pig named Johanna, doesn’t just live inside the book. She also interacts with the artist who’s drawing her. For example, Johanna decides that she needs to be wearing clothes, and immediately turns to the artist. She tells the artist she’d rather be wearing a striped shirt than a floral-patterned one, and then complains that there aren’t enough stripes.

Johanna the pig misbehaves, argues with her creator, and complains if anything doesn’t go the way she wanted it to. 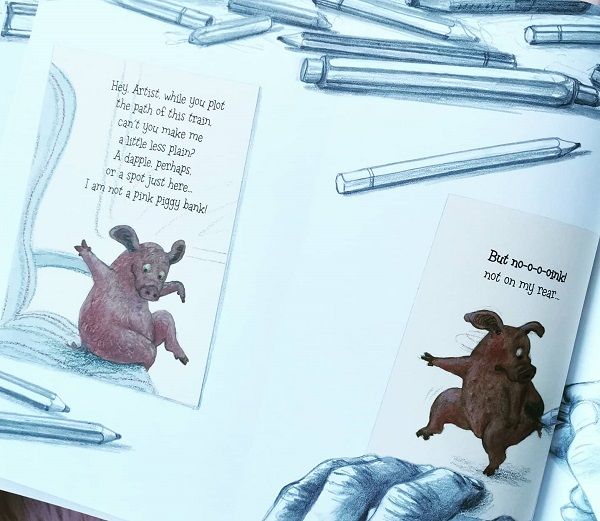 “The pig reminds me a bit of someone I know,” I said, smiling.

Matvey made a face as if he didn’t know who I was talking about, so I gave him an even more expressive look than before.

“Me?!” he exclaimed theatrically, “Nooo! Anyone but me!”

“Well, I’m sure I know who the artist reminds me of,” said Matvey, noticing my smile. So then it was my turn to pretend that I had no idea what he means. But in all honesty, his response really did surprise me.

“And why is that?” I asked carefully.

“That hand…” continued Matvey, “Well, to the pig, the artist really is like God. The artist imagined her, drew her, brought her to life. And the pig – the pig is like a person. Always complaining, asking for something different. She’s very rarely satisfied.” 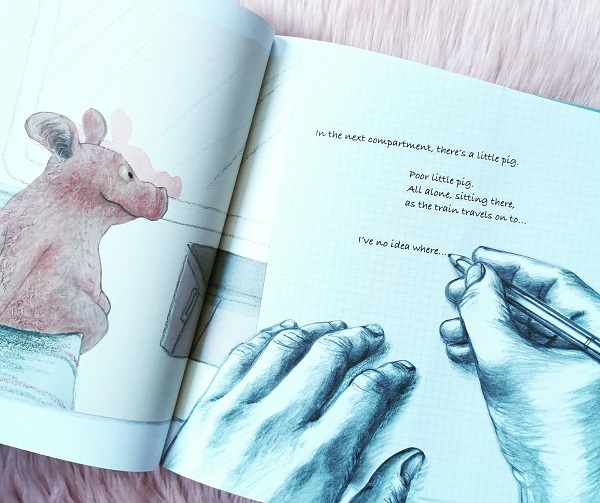 I nodded, beginning to understand.

“But in the end, look…” Matvey flipped to the end of the book. “The pig makes a friend. And she asks the hand to stop and leave them alone.”

I take a look at the plot twist. Johanna tells the artist to draw something else while she continues her journey with her new friend.

“See?” said Matvey, turning another page. And on the new page, the artist’s hand is beginning to create a completely different story, drawing a motorboat speeding across the waves. “Now the artist is working on something else.”

“And what about the pigs?” I asked.

“Well, like always,” shrugged Matvey, “When they need the artist, they’ll come get her. But for now, they’re happy.”

And while I was mulling over the depth of what Matvey had said, he had already gotten distracted and was fantasizing about who would sit in the motorboat.

Some people say that ten-year-old children don’t need to read picture books anymore, that they aren’t interested, that there isn’t enough text… But sometimes, even the books that seem simplest at first glance are concealing significance that you’d never expect. We adults may not notice it ourselves, but our children can show it to us. And then we have the opportunity to talk to them about something serious, something that might be worrying them in ways we might otherwise have never even guessed.

We opened the book a few more times that evening. We looked at the lovely illustrations, laughed at Johanna’s amusing antics, marveled at how the artist brings her imagination to life, drawing her hands, her work table, her pencils, and her paintbrushes in black and white and the story itself in color…

And I kept remembering what Matvey had said about how we’re just like that pig. Always asking for more…

“Let’s draw another story just like we did before,” suggested Matvey, and, without waiting for an answer, ran off to find some paper and pencils.

“Why not?” I said and followed my young mastermind.

But this time, I noticed how attentively he made sure that all the characters he created were leading happy lives.