This book should be banned in schools everywhere! The protagonist, a student at Hills Village Middle School, is a dangerous young man who decides to break every school rule there is. Anyone who reads this book risks becoming a fan of the “Operation R.A.F.E.” (“rules aren't for everyone”) game. Running in the hallways? Ten thousand points! Skipped class? Twenty thousand points! Break school property? Thirty-five thousand points! And bonuses if Jeanne G. sees you do it, or if you get detention. 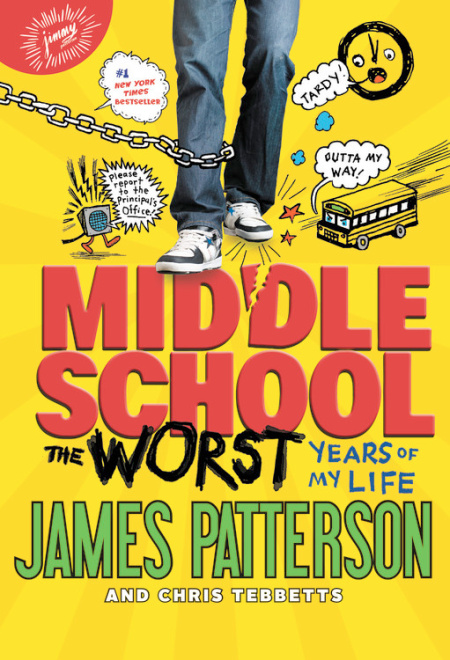 When I put down James Patterson's Middle School: The Worst Years of My Life [most recent English edition: Scholastic, 2016. ISBN 9781338135367], I thought about how carefully we choose what to show the rest of the world. We think about what dreams we share with others and what story about ourselves we want to tell.

At first I thought that I’d just read a book about a boy named Rafe Khatchadorian, who just hates school. He’s in sixth grade at a regular American middle school. His only passing grade is in art class—things are much worse in the other subjects. Rafe makes excuses for himself, wondering whether people even need social studies and proclaiming that science is for nerds.

He has a best friend, Leo, and together they come up with “Operation R.A.F.E.” Rafe tells us about his journal, where he says Leo details the progress of the operation with elaborate drawings. We see a table with points for broken rules, a special R.A.F.E. suit, and even the school fire alarm system after Rafe and Leo set it off.

Rafe likes his classmate Jeanne Galletta and it seems like she may like him too—after all, she invited him to help out at their bake sale, right? But when he tries to invite Jeanne out for pizza, she turns him down. Rafe doesn’t let that get to him. In fact, it seems he doesn’t let anything really get to him or slow him down. There are just too many school rules that have yet to be broken.

But gradually we start to see another Rafe, one whose life is a string of problems. He lives with his mom, sister, and a stepfather who goes by “Bear.” Rafe thought he could always trust his mom, but that was before she announced that Bear would now be checking his homework every evening.

This other Rafe has just one imaginary friend and not a single real one. School bully Miller the Killer takes away his precious notebook, blackmailing him and forcing him to buy it out page by page. Rafe also gets detention and has to fight the Dragon Lady. Okay, there’s no real dragon, but that’s how Rafe sees his hours in detention with Mrs. Donatello, his English teacher. All he wants is to make enough money selling soda to buy back his notebook and move on to seventh grade—Rafe thinks that will spell the end of his problems. At the same time, he feels trapped in a vicious cycle. He draws his perfect life as he imagines it, but he doesn’t believe that he can ever actually have it.

When his mom asks Rafe why he has such bad grades, he says that maybe they aren’t teaching him the right things at school. That day he gets the idea for Operation R.A.F.E. 's final mission. Of course, he’ll be punished for the huge mural drawn on the school wall in marker. But Mrs. Donatello (the “Dragon Lady”) thinks, as Rafe does, that they might just not be teaching him what he needs. She says that he should apply to Airbrook, an art school for young artists. All he needs to do is send in his portfolio: his Operation R.A.F.E. sketches are perfect. And, of course, he needs to finish out sixth grade with passing grades. After all, Rafe can be a pretty good student if he knows what’s in it for him.

We don’t immediately find out what Rafe is like on the inside. That comes out gradually and it’s very different from what we see at the beginning. The thing is that Rafe prefers not to talk about it—not with his mom, or his sister, or the readers, or anyone else. He hides from everyone. And the misfortunes keep piling up until he has to speak out. In the end, of course, it’s his mom who tells the principal everything, but Rafe can no longer pretend his problems don’t exist. He has to let his real world into his fantasy one, and in the end, it turns out that’s not so bad. Nobody judges Rafe. Nobody dismisses his creativity. The principal even lets Rafe draw a real mural for the school. That conversation is enough for Rafe to believe that his dreams can become reality and convince him to stop hiding. Finally, the readers see the boy just as he is. And I, for one, liked what I saw.