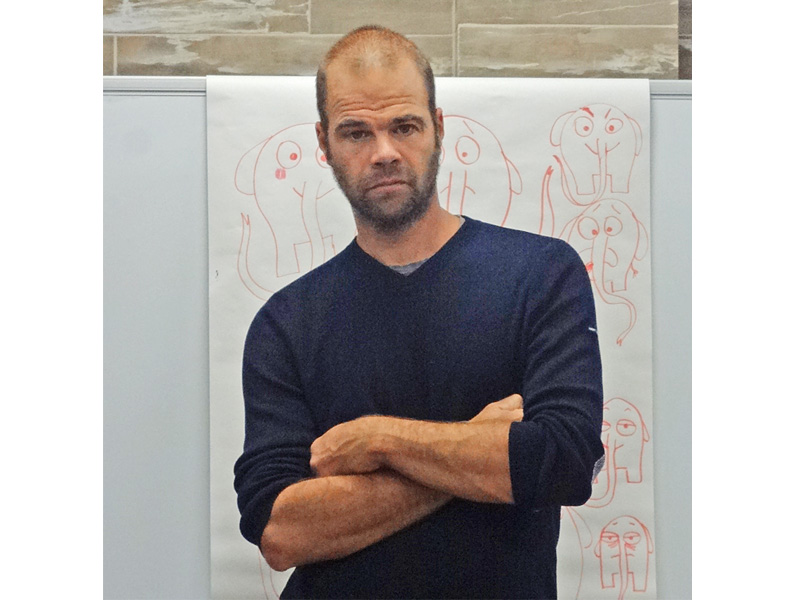 Benjamin Chaud is a French author and illustrator, a nominee for the Astrid Lindgren Memorial Award (2017 and 2018), and winner of the gold medal from the New York Society of Illustrators in 2014. He’s best known for his Little Bear and Papa Bear series and his illustrations of Davide’s Cali’s books. On Chaud’s visit to St. Petersburg in September of 2019, Papmambook’s Anna Rapaport caught up with the author to speak about how he started writing his own books, what role personal experience plays in his work, and what inspires him as an artist. 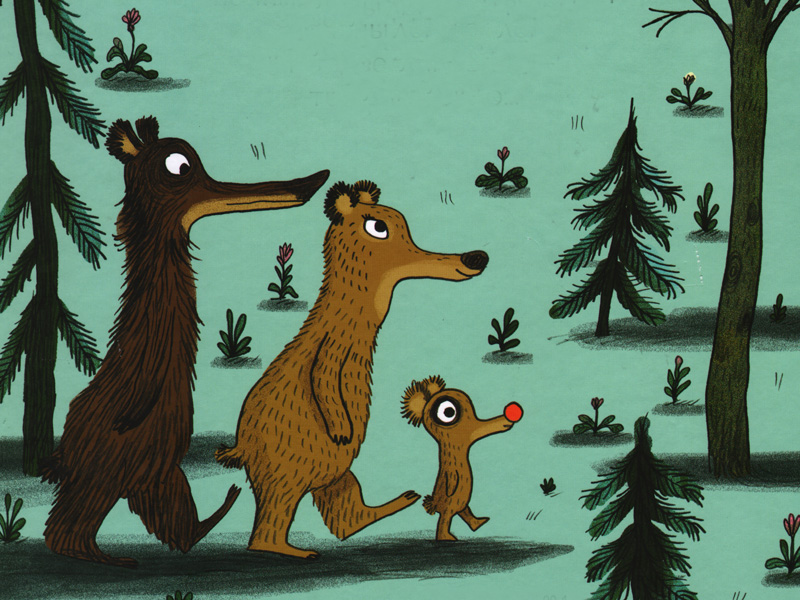 - Benjamin, for a long while you illustrated books by other authors. The series about Pompon Little Bear was the first that you not only illustrated, but also wrote. Why do you think you made that transition?

- I came up with my first books back when I was in school. When I became known as an artist, publishers would offer different stories by other authors to illustrate, and I would agree. Illustrating others’ stories is a lot easier and simpler than coming up with your own. Besides, I didn’t have any free time, I was constantly illustrating. But then I met Ramona Badescu and together we made the series about Pomelo the pink elephant [one of their books, Pomelo's Big Adventure, was published in English in 2014 by Enchanted Lion Books. ISBN 9781592701582]. Ramona and I worked together—in a literal sense, sitting at the same table. We were truly coathours, building the book together, unlike previous work where I’d get the text and draw the pictures. This collaborative work taught me a lot. I learned how to create stories, trust the reader, and get my ideas across. I learned to express what I have inside and to have the story rely on the picture and the picture on the story. At one point I got tired and disillusioned illustrating others’ books. I realized that I want to imagine stories myself—because no one is going to write my stories for me. 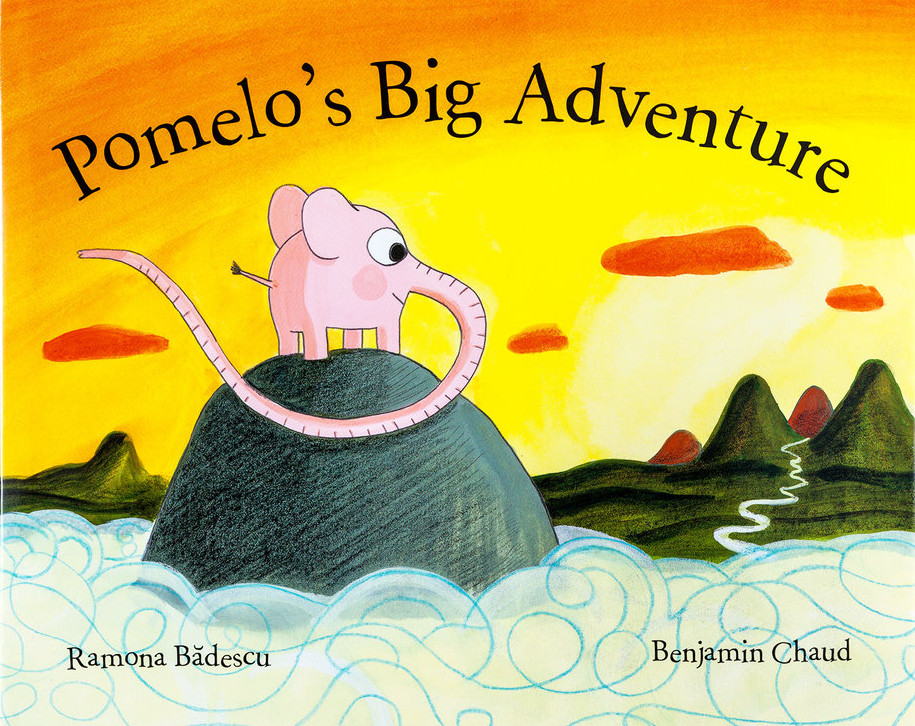 This requires a certain courage—to stop and think. I draw quickly, but it takes me a lot longer to come up with text. I have to work at choosing the right words, putting together phrases, changing and editing them. But I do think that books by author-illustrators are much more interesting. They manage to create a whole universe, a new world. If you have the text and pictures separately, it doesn’t always work out—a new world may not materialize.

- I come up with a book a year on average. That’s a comfortable pace for me. I illustrate others’ books a lot faster. Publishers’ orders and work with authors does take up most of my time and I truly enjoy that work. There are some really interesting authors I’m happy to work with. Basically, combining the two professions is ideal for me. Though at the end of the day I’m proudest of the books I wrote myself.

- The Pompon series [published in English by Chronicle books] has a very strong “father” theme and it depicts a father-son relationship that’s practically perfect. Is it based on personal experience at all? Would you say that you are Pompon’s dad in a sense?

- Yes, of course, I started the series when I became a father myself. My son was born, and along with him, a father’s experience and feelings. In the book about Pompon, I share how it feels to be a father. In the first two books [The Bear’s Song, ISBN 9781452114248, and The Bear's Sea Escape, ISBN 9781452127439], Pompon’s mother doesn’t appear at all. There’s just the father and the son. My wife wasn’t very happy with that, but I didn’t want to talk about the whole family. I wanted to talk about myself. With the other children I started making slightly different books, and the mom appeared in those. But at first it really was just about the relationship between father and son. 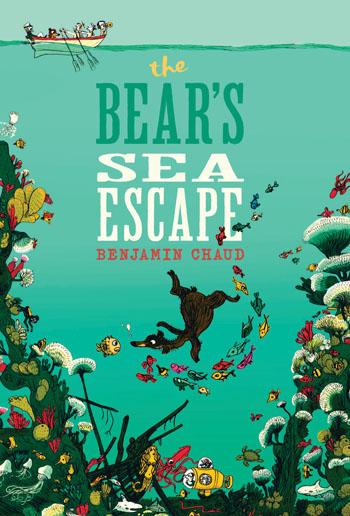 I try to be as honest as possible, but of course this relationship is idealized. In real life, I don’t always behave like Pompon’s dad. I don’t have any tips or advice for readers about how to be a father. I do try to be the best as a parent—but it turns out that’s impossible. So I try instead not to make any very serious mistakes. You have to trust children, allow them to discover the world, and accompany them as they do. And of course this character, Pompon Little Bear, allowed me to put myself in the place of the child and helped me better understand children, with their freedom and carefree sense of life.

- Wimmelbooks are currently a very popular genre around the world. Do you have any favorite authors in this genre? Whose work inspires you?

- To be honest, I’m not very familiar with wimmelbooks. I haven’t read many of them and don’t keep up current with authors. Personally, I find they lack narrative. I see the main element of the book as the story. I love several European author-illustrators—Kitty Crowther, Beatrice Alemagna. Each has their own universe, which is interesting to explore, because they are sharing a part of themselves. I like Americans, such as Saul Steinberg, as well as Jean-Jacque Sempé, who’s French, but has worked in the United States. And, of course, I’m inspired by films, dance, and theatre, because you can’t live on children’s books alone. I would say that more so than wimmelbooks, I’m inspired by medieval artists like Bosch or Bruegel, who painted very elaborate scenes.

- Your books have been translated into many languages and you’ve received several international awards. Do you feel like a citizen of the world, or are your French roots more important? Does your work speak to certain French experiences, images, traditions, or characters?

- I can’t say that I feel like a Frenchman. I grew up in Europe, immersed in its history. As a student I left to study in Spain and traveled a lot. I do feel more like a “citizen of the world” than one particular country, or at least like someone living in this world with others. I have friends from almost everywhere I’ve been. It’s very easy to keep in touch with modern technology. I’m often in Asia or Africa and I’ve traveled all over Europe. I can tell you that kids everywhere are the same. I’ve been lucky to have my books well received in different countries and I think that’s because I’m not just speaking to French or American people. I’m speaking to “just” people, regardless of where they’re from, and I speak of something very personal, very individual, something that comes from inside me. And you can understand that in any corner of the globe. 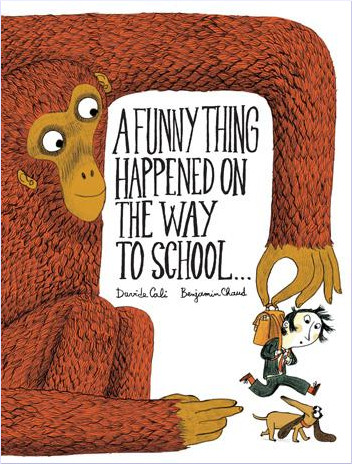 - Did you love reading as a child?

- I was a very introverted child, I loved reading and was always running through stories in my head. Sometimes I couldn’t fall asleep without finishing a book. I need literature in order to live, as well as in order to sleep. When I was a child, it was the pictures and images, rather than the texts that drew me in. They were these psychedelic images from the mid-70s, that allowed me to just “walk into” a picture and explore it. Now, I try to do the same, share my emotions through illustrations and books.

- Do you read to your children?

- Yes, regularly and systematically, and reading is a very important time for us in the evenings. Of course, I could read to them during the day, but I prefer our evenings. I usually read one, two, or three stories aloud. By the way, I’ve noticed that when my kids fight or are over-excited, you give them a book and they instantly calm down and the conflict seems to dissipate. Besides reading aloud, I also love to tell stories, retell others stories. I’ve noticed that when I retell a story, my feelings are much stronger than when I first encounter the book, film, or play on my own. I may even tear up. That’s probably why I’ve chosen this work—to share my emotions with others. I don’t try to convey something in particular to my readers. Just one thing—a love of books. Reading should never be obligatory. It should always remain pure pleasure.