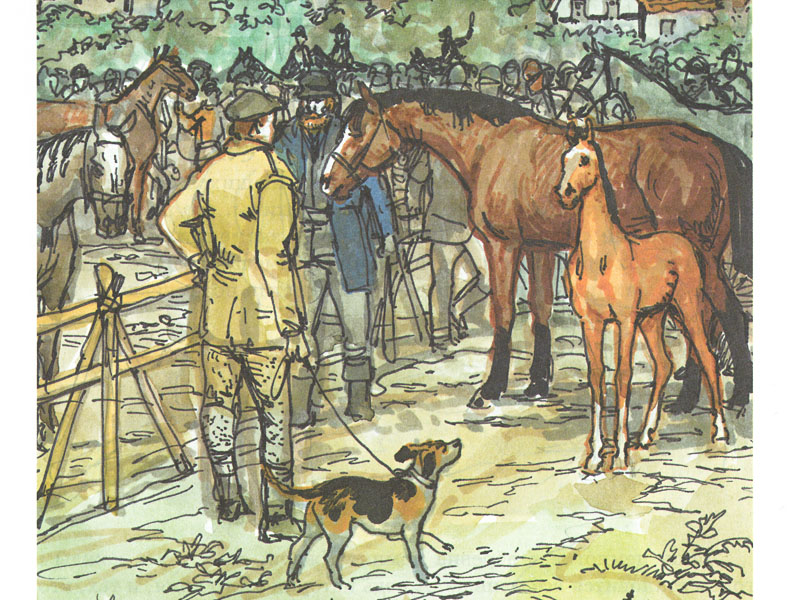 When nine-year-old Anya got the novel War Horse as a gift, I’d never heard of it, but I saw the “12+” rating and suggested she set the book aside for later. I was hoping to read it myself first when I got the chance—after all, the novel and Michael Morpurgo himself have won top awards for children’s literature in his native England, as well as abroad. But Anya wasn’t giving up without a fight. “Mom, it’s about horses!”, she pleaded. And I gave in. My eldest children are obsessed with everything equine, and they’re serious about horseback riding. Still, we’d never read any real novels, because it had always seemed too early. Once we started, though, I had no regrets. 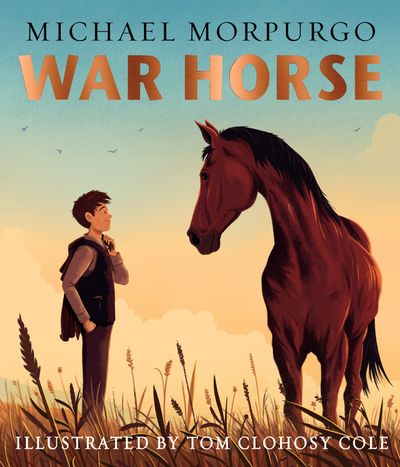 There’s one indisputable recipe for a good novel: the hero should change significantly by the end, transform completely in some way. Sometimes, a very good novel changes its readers, too. In any case, as my children immersed themselves in the story of War Horse (we read it aloud twice, watched the film, and then Anya read the book on her own a few times), they changed and grew up.

Michael Morpurgo’s War Horse [most recent English edition: Egmont, 2020. ISBN 9781405292443] is a dramatic, tense, gripping tale set on the Western front of World War I, and is written from the perspective of a horse named Joey. I can’t say this kind of reading comes easy. With their characteristic self-centeredness, children tend to have trouble breaking with a me-centric sense of the world. Reading texts like these develops their capacity for empathy, which shows in everyday interactions.

Joey is a horse of noble blood, fit for a prince or count to ride, but by chance, the young foal is bought by an alcoholic farmer at the fair. What the farmer really needs is a work horse and as he sobers up, he decides to sell off the ill-advised purchase. His young son Albert begs him to keep the foal. Over the next several years, Albert trains Joey and the horse becomes an excellent steed. Then World War I breaks out and the father, beset by financial woes, sells Joey to the British army, without so much as warning Albert.

My kids were indignant. “How could he do that, Mom? Albert raised the foal and did everything his father said and he didn’t even tell him he was going to sell Joey! It’s not fair!” So that was our first dialogue—about parents and children, respect, patience, dreams, and the power of spirit.

As Anya grows up, she becomes more aware of how imperfect the world of adults is, and she reacts in typical teenage fashion, protesting in a way that we, the people of the twenty-first century have come to consider normal and attributable to that difficult age. A hundred years ago, as we discovered, everything was different. A fifteen-year-old boy wouldn’t go against his father’s wishes, preferring to bear even an obvious injustice out of a sense of filial piety. Still, Albert doesn’t neglect his dream of raising a true riding horse instead of a farmer’s work horse and he reaches that dream. That same strength of spirit later carries Albert to war once he reaches the age of conscription, and sustains him through what appears to be a harebrained scheme—among all the thousands of horses on the battlefields, he’s going to find his Joey. And he does. Meanwhile, we’re often upset and hopeless when things don’t go just the way we plan, and we have a hard time accepting fate and sticking to our ideas….Anya had plenty of food for thought that night.

Joey’s war career is full of ups and downs: over the course of several years he serves in the elite units of the British cavalry, then gets captured in a reckless attack and is made to drag a cart with injured German soldiers, or even transport cannons so heavy they leave bloody tracks on his body.

Michael Morpurgo strives to write honestly about the war and children come to see it as this everyday bloody job. At times I would wonder if we should continue reading or we’d started too early after all. Anya and, to an even greater extent, Makar, still live in the fairytale-fantasy world of adventure stories where the scariest parts are made-up villains and fire-breathing dragons. In War Horse, a simple, rough reality unfolds, and you sense that it's the people here that most resemble dragons. Incompetent English generals send the best of the cavalry under the cannon fire and barbed wire of the enemy. A brusque and indifferent German officer takes Joey from Emilie, the French girl caring for him, because the army needs horses. He could care less that she’s the one who saved this horse, treated, and fed him. It turns out that evil doesn’t always wear the enemy’s uniform. Good doesn’t always come from “our” side, either. A stablehand in the German artillery known as Crazy Old Friedrich truly cares for Joey and protects him. We learn that in life, far from fairytales, things are not black and white and you need a good deal of soul-searching to understand what’s really going on and find the truth. In dirt, blood, fear, and loneliness, you don’t have to lose yourself, and, like Crazy Old Friedrich, you can learn to laugh when you want to cry.

There was another important discovery we made as we spent evenings reading the novel: you can learn to come to agreements with others and avoid serious fights. This was particularly timely. Conflicts and tears are an everyday reality in a big family. Sometimes I wonder how long it will be until our children of different ages learn to really understand each other and resolve conflicts. Someone has to start.

The story of Joey taught Anya and Makar a useful lesson. After yet another battle, the horse ends up in the no man’s land between the Germans and the British. Injured and bleeding, he shies away from both armies whistling to lure him in. Finally, two men from opposing sides come together in the open space between them. Armed with wire cutters, they free Joey from the barbed wire he’s entangled in. In absolute silence, thousands of eyes watch them. Naturally, each of Joey’s “rescuers” wants the horse. How will they decide? The German takes out a coin—heads or tails?—and the rising tension dissipates. The British take the horse. “If only the leaders had tossed a coin, there wouldn’t have been a war…” Makar sighed. If only…. Now, when there’s a dispute, the children often come running to me for a coin. And, you know what? It works.

Luckily, the novel has an almost fairytale-like happy end and that’s perfect for my not- quite-grown-up readers. Albert and Joey come home together. Albert marries and takes over his father’s farm. Any other outcome would probably be a little much for children’s hearts to bear. The book has already realistically described the suffering and deaths of people and horses. I think one of the main take-aways for my kids was that life is no fairytale and a fairy with a magic wand is unlikely to show up. But that doesn’t mean there’s no place for miracles. There is. Miracles happen when your hope lives on—your hope, your loyalty, your dream, your friendships, and all the other great and beautiful things. We must not be afraid to live and sometimes, we must laugh when we want to cry.