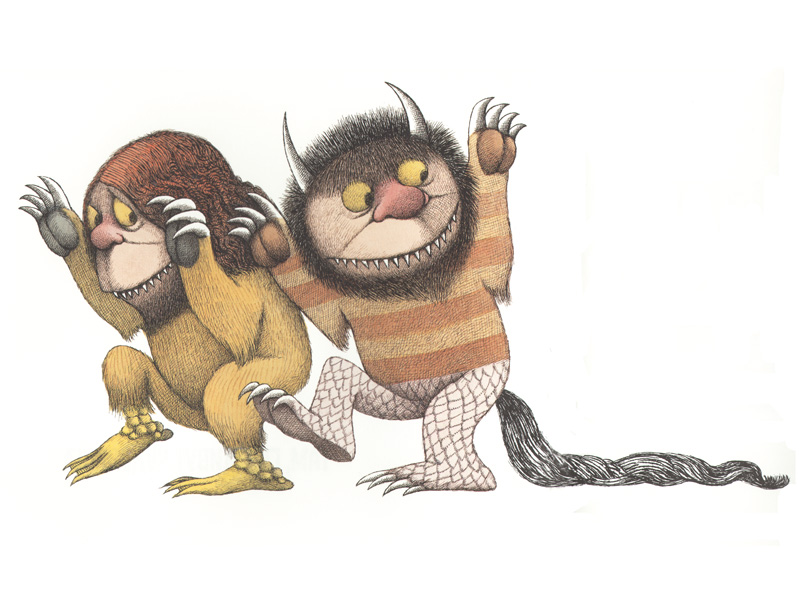 Writer and illustrator Maurice Sendak is a seminal figure in international children’s literature. He’s considered the pioneer of a new style of illustration for the second half of the twentieth century. Sendak’s books have been translated into many languages. One of the best known among them, Where the Wild Things Are [most recent English edition: Bodley Head, 2013. ISBN 9781782300045], is a Caldecott Medal award winner. This book is finally coming out* in Russia and is likely to raise a lot of questions.
- If this book is for kids, why is there such a scary creature on the cover? An adult would be scared!
- What is there to read here? Why is there so little text in the book?
- What is this even about? If it’s a story, it should teach one something—or more specifically, good values. And you don’t see anything good here, at least not at first glance

It’s easy to predict the questions which the publishers, booksellers, bookstore employees, and (I hope) librarians will have to answer, because they’re quite standard. They’re the same questions that came up when The Gruffalo came out (there’s a monster on its cover, too) and about all sorts of other well-known picture books with less text. And the question of “goodness” seems to arise with any literature in translation.

Since I really like this book—its cover with the monster, the pictures inside, the accompanying text, and, above all, its meaning, which is quite deep—I’d like to explain how I see it.

Let’s start with the idea that “there’s very little text.”

A huge amount of books in translation have been published in Russia over the last decade, and we’ve run into all kinds of book culture phenomena, many of which are entirely new to us. You can’t quite say that Soviet children (and adults) were unfamiliar with picture books. There were, for example, board books or accordion books: each page had a big picture, accompanied by a short poem or two to three sentences of a story. But these books—how to put this mildly?—didn’t get the respect they deserved. As a typical 60s child, I had such books. I remember building fences from them when I was four. These cardboard accordion books were associated exclusively with children of potty-training age.

In Western book publishing, picture books represent a powerful independent genre, reaching far beyond preschool age in the diversity and complexity of their themes. Picture books for teenagers, for example, are fairly common. I can assume that the evolution of picture books as a genre was helped along by the culture of comics, where the language of communication with the readers is primarily that of pictures. But a picture book is not a comic book—it’s a different animal.

True, there are fewer words in a picture book than the more familiar text-based book. The genre itself demands a more laconic approach. But this pithiness means that the author is very careful and demanding in his choice of words. At the same time, the meaning is conveyed largely through the pictures, without which the author’s message would be not only incomplete, but even distorted. In other words, a picture book implies reading in two languages simultaneously—in words and graphics.

This is new for us. For some reason we can’t treat words and pictures with equal respect. To my horror, I discovered that I can’t “read” comics. I look and don’t see them. It turns out I can’t move my eyes from picture to picture. It’s an unfamiliar way for me to take in information. In that sense, I’m a typical member of a generation brought up on a logocentric Soviet culture, which inculcated “respect for the written word.” This respect, however, can have all kinds of consequences. On the one hand, writers in Russia are traditionally revered. On the other, some 60 years ago, our society experienced the horrifying power of such written words, when a critical article published in the Soviet Pravda newspaper could literally be a death sentence.

Our children and grandchildren are growing up in a completely different environment, one in which the language of visual culture plays a huge role. A lack of fanaticism for the written word makes them more receptive to the language of graphics. They will love and cherish picture books, and picture books, in turn, could widen the circle of child readers.

To put it differently, Where the Wild Things Are, which has less text than we’re used to seeing, still offers reading for children. It’s simply a different kind of reading.

Now let’s talk about those monsters, what the story “teaches” us, and where to find the wholesomeness adults find so important.

The story Maurice Sendak tells is an everyday episode from a little boy’s life. Judging by the pictures, the boy is five or six years old. That is to say, exactly the age at which children most enjoy role play and dress up. One fine evening, Max, the protagonist, dons a wolf suit and starts to behave “accordingly”—he acts up. Why does he act up? Probably because a wolf is a wild animal that doesn’t need to conform to the rules of human society. If you’ve dressed up as a wolf, you (and this is natural for a five- or six-year-old) go into character, literally “inhabit someone else’s skin,” and, in a sense, you get the right (justified internally) to behave like a wolf.

But this explanation for misbehavior is entirely unconvincing for an adult, here—Max’s mom. She scolds him and calls him a “wild thing.” Max, however, is too caught up in his game. His mom’s words, rather than calming him, push him to further “wolf” mischief. “I’ll eat you up!,” he yells at his mom. He’s grounded and sent up to bed without his supper. Well, these things happen. Clearly his mother has run out of ideas.

Is Max hurt? Yes. Children are always resentful when they’re punished. And although the text never explicitly says that he’s offended, it’s “written” on Max-the-wolf’s face (he never took off that unlucky costume.)

The situation is a familiar one. The adult gets mad and punishes the child. The child is hurt (it’s useless to expect “objectivity” or even repentance). This sense of offense is impossible to bear. You have to come up with a way to deal with the hurt, do something that will help you escape your punishment. If it’s impossible in reality, you have to do it in your imagination (the costume, I’ll remind you, is still on).

Of course, there’s nothing about that in the text either. The text says that a forest suddenly grows around Max. The illustration shows how Max likes this “decision,” that it’s his idea to “grow” a forest in his room. It shows how he “completes” the fantasy as the walls of his room fall away and disappear, leaving a vast ocean, and Max sails away on a boat that fortuitously appears. To run away from home, those pesky adults and their endless demands is the perennial dream of the offended child.

That’s when things really get interesting. Max’s boat reaches the place “where the wild things are.” That is, a land full of creatures just like him. Just like him in spirit. What was it his mother said? She had told Max he was a beast, a wild thing.

The illustrations depict monsters so scary, with such huge fangs, claws, and horns that it’s instantly clear to us readers: Max is not the worst here by far. Standing there in his little wolf suit next to these horrific beasts, he’s just a good little boy. And, of course they all want to attack him. Although Max is smaller than the creatures and doesn’t have those awful claws and fangs, he’s able to tame them. All he has to do is tell them to “be still” and look into their yellow eyes without blinking.

The little person in the wolf suit knows all about these “scary tactics,” he knows them from “inside the costume,” which still gives him power. Imagination is a powerful magical tool. And the wild things? They behave. They make Max their king. (Of course! Since he’s a wild thing, he may as well be the main one. That’s less hurtful.) Then Max signals to them and they all go wild. On his command they leap about, hang off the trees, widen their eyes, roar, yell—basically do everything Max did alone before, and because of which, he was sent off to bed without his supper. And though the king of wild things seems to be happy with what he sees, for some reason he can’t forget that he’s been punished. So when Max has had enough of the craziness, he sends the creatures (also tired) to bed—without supper, mind you. It’s unclear what they’ve done wrong, but now’s not the time to quibble over justice. It’s how Max was treated and it’s how he’ll treat those he has power over—to feel the fullness of his own newfound power. Adults can punish, can’t kids do the same? Max sent the creatures to bed without supper because he’s the adult here. He’s like his mom…. Suddenly, the poor child is overwhelmed with an awful sense of loneliness. Not remorse, no. A desire to be held. He wants to be with someone who loves him more than anyone in the world.

You can “grow” a forest and make the walls of your room disappear, but you’re still too small to put up with yourself and all the myriad the creatures your imagination has conceived of. You’re powerful and you’ve seen proof of that power, but as soon as the smell of a delicious supper reaches you (Mom seems to have reconsidered and softened the punishment)—that’s it! You have to head home. Time to return to reality. The imaginary world can also be tiring. Everything you’ve wished for has already come true, after all. You’ve been the king of terrible creatures, you’ve reveled in your imaginary power. And so Max gets back into the boat to head home (the game has its rules, after all). The creatures rush to the shore, begging Max to stay (“we’ll eat you up, we love you so!”), but Max is unyielding. Simply put, he really wants to go home. Maybe he even regrets what he’s done just a little bit. Either way, he sails back with his eyes cast down, looking within himself. And you can literally see that he’s tired of being a wild thing! It’s so nice to end up back in your own room—so nice to have that costume, a savage’s hide, slowly fall away. This terrifying wolf clearly wants to become human again. There’s such a delicious smell in the room. And his supper is still hot.

So we do have material to read here. Sendak’s terse text carries a lot of weight. It’s momentous and psychologically nuanced and incisive. In interviews, Sendak spoke about the particularities of his art. As I see it, relevant to understanding Where the Wild Things Are is that Sendak renounced the sentimentalization of childhood and wanted to show children as they are: people who can’t always tell right from wrong, but never wish somebody ill.

This way of looking at the child is important to the child herself. Because a child needs to be understood. Feeling “seen” can save a child, because then, there is no need to lie. And any lie is destructive.

This is not to say that a child reading and looking through Sendak’s book can rationally explain his feelings about everything that happens, or describe the “recognition” that takes place. When we read, there’s a lot that happens to us on a subconscious level. And it’s no less valuable for that.

*This article was originally published in 2014.