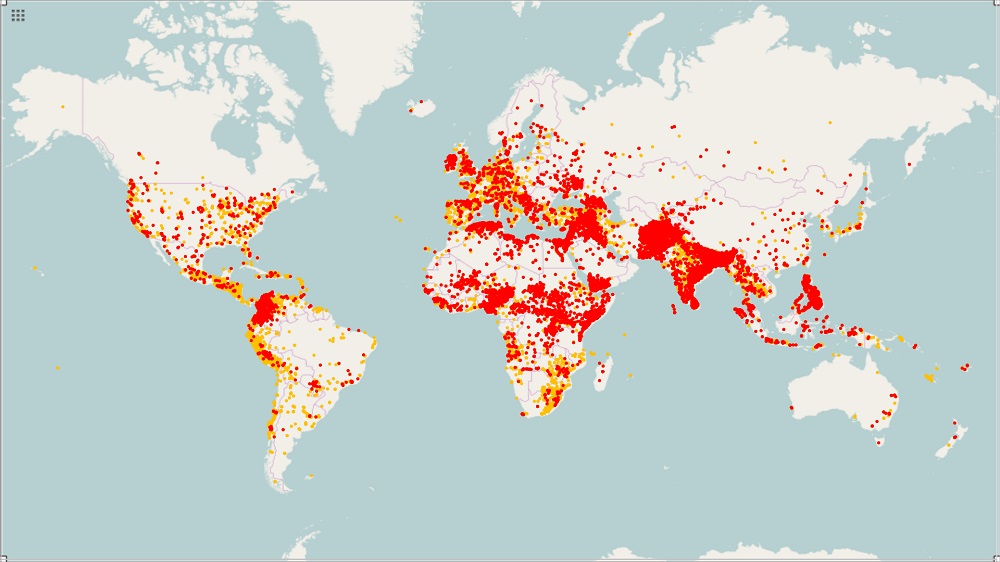 American anthropologist Scott Atran based his 2010 book Talking to the Enemy: Faith, Brotherhood, and the (Un)Making of Terrorists [most recent English edition: Penguin, 2011. ISBN 9780241951767] on numerous interviews that he conducted with terrorists from all over the world and their relatives. He attempts to show what really motivates people who join extremist groups and sometimes even die for the causes of these groups. Papmambook’s teenage authors offer their take on the book. 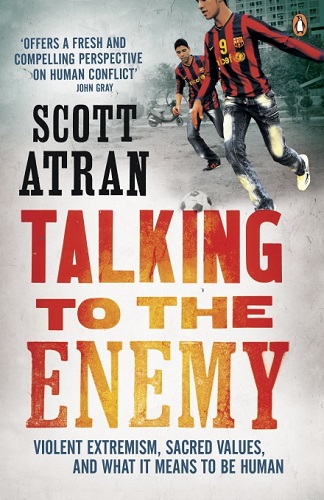 Terrorist attacks, shootings, explosions, plane crashes, and murders of innocent people—it’s what we hear about every time we turn on the TV or radio. That’s why this book, an investigation into terrorism, what causes it, and what drives terrorists, drew my attention. It’s actually very serious research.

We often don’t even try to understand the reasons for what we see around us—we just attach labels. True, it’s easier and it gives you the sense that you’re right and that you know what you’re talking about. But is that really so? People have become their own worst enemies. If something does bring an end to our civilization, it won’t be aliens, it will be us.

Even today, violence is seen as a more effective way to resolve conflicts than peaceful negotiation.

Instead of finding the reasons why terrorism occurs and trying to eliminate them, we kill terrorists, pushing ourselves into a vicious circle of counterattacks. Words are vital for us to hack away at this knot. They are invaluable and have the power to change the world.

Scott Atran believes the same. In his book, he tells the stories of how the most famous terrorist groups came to be, presents his conversations with terrorists and their relatives, shares his thoughts on religion and the power of words, and seeks to answer questions such as why people die in the name of faith, what drives them, and what moral values they have. He shows that terrorists are normal people with a very distorted sense of justice. They go to their deaths not just for faith and religion—they go to their deaths for their brotherhood.

Religion, by the way, is another very controversial topic. Several chapters of Talking to the Enemy are devoted to this issue. Science can’t help us deal with our fear of death and loneliness, while religion represents hope that allows us to live and overcome difficulties.

I’d like to end on a quote from the epilogue of the book: “Do I not destroy my enemies when I make them my friends?”

I have something in common with members of the U.S. Congress: when I read Scott Atran’s Talking to the Enemy I was as stunned as they were when they heard this author speak. The idea that terrorism needs to be studied, and that you can and should talk to terrorists, seemed crazy to me. But Scott Atran convinced me. Talking to the Enemy is not an adventure or action or mystery book, but rather a serious sociological inquiry, so it’s not easy to read, especially for the uninitiated reader.

In his book, Atran references many historical facts and events of recent history, as well as political decisions that have not yet been described in textbooks. As you turn the pages of Talking to the Enemy, you feel like Margarita [from Mikhail Bulgakov’s novel The Master and Margarita] examining Woland‘s wondrous globe: armed conflict lights up first one part of the planet, then another.

Like millions of others, I usually get ready for school in the morning with the news on in the background. Of course I knew that the world was full of unresolved conflict and controversy: India and Pakistan, Israel and Palestine, Syria, Afghanistan, and, of course, the Chechen Republic. But I’d never considered the causes of these conflicts, didn’t think of what was hidden behind the images that flash on the screen to the breathless reporting of a correspondent—destroyed buildings, fires, people fleeing. News programs don’t speak of the causes behind these images, but Scott Atran sets out to tell readers about them in his book Talking to the Enemy.

Before I read this book, I thought terrorists were weak people who were easily manipulated, zombified by religious slogans and ideas, and incapable of rational thought. As it turned out, I was wrong on many counts. In his research, Scott Atran interviewed the family, friends, and ideologists of jihadists. He spoke with those who were just preparing to die a martyr’s death, taking the lives of other people with them. Terrorists from the so-called “Hamburg Cell,” who were part of the 9/11 terrorist attack in the United States, were students at a technical university in Hamburg and were from well-to-do families. None of them had gone to a religious school. What had pushed them onto the path of jihad? What made twenty-year-old guys cut their own lives short, while taking others with them?

The author asked a boy playing soccer in one of the Muslim neighborhoods of Madrid whom he wanted to be when he grew up. The boy said: “Ronaldo or Osama,” referring to Osama bin Laden.

Once, the father of one of my classmates said that boys need war, because it’s only at war that a man shows his best qualities: bravery, determination, endurance, and nobility. Without war, a man can’t quite figure out what to do with himself and gets up to no good: he abuses his wife and children, cheats, quits his job, and spends hours in front of the computer. At the time, I found his words shocking, but that’s exactly how Scott Atran explains why young men chose the path of jihad. They want to be heroes, die in order to attain salvation in Paradise, die so that people close to them can be proud of them, and little boys look up to them.

When you look at this way, the idea of “rubbing [terrorists] out in the outhouse”* doesn’t seem so viable. True, you can destroy camps and training bases of militants with surgical strikes, but that won’t solve the problem of terrorism. The young men who bombed passenger trains in Madrid in 2004 had never studied in militant camps—their whole lives were in Europe. They had never been members of any terrorist group. They created their own, which operated under the very noses of the police in the capital of Spain. But did anyone even suspect their plans before the first explosions rang out?

Similarly, advocating against religion won’t make the issue of terrorism disappear. As Atran’s research makes clear, there aren’t all that many religious fanatics among terrorists. Religion isn’t what makes them kill. “People, including terrorists, don't simply die for a cause,” writes Atran, “they die for each other, especially their friends.”

The reasons for female terrorism are entirely different, however. Women generally become suicide bombers as an act of revenge for the deaths of loved ones. That’s the conclusion the author came to after research in the Chechen Republic.

Scott Atran ends his book with a story of how Abraham Lincoln was able to silence his critics by saying “Do I not destroy my enemies when I make them my friends?”.

I won’t call for us to make friends with terrorists, but, like the author, I’m convinced that the war on terrorism must begin by giving young people new heroes to look up to, heroes that reflect their hopes and dreams. You have to create the kind of society where young men will find a place for themselves, and they won’t need war to prove their bravery and nobility. I would join the author in saying that political problems should first be solved at the negotiating table. Our own history presents cases where streets were named for those accused of terrorism. Take Stepan Khalturin, a revolutionary who bombed the Tsar’s Winter Palace, as a result of which 11 veterans, heroes of the Russo-Turkish War, died, and 56 others were injured. You could probably count the Russian cities without a Stepan Khalturin street on one hand. [My hometown] Yaroslavl has one too. So who was Khalturin—a hero or a terrorist?

Scott Atran’s book rid me of stereotypes and helped me understand the reasons for the conflicts that lead to terrorist attacks. I felt a deep respect for the author who, independent and unbiased, without succumbing to hysteria, traveled to many remote parts of the world, speaking with those who could grab a gun and shoot, despite having just sat down to speak with a researcher. That takes a lot of courage.

*A quote, widely known in Russia, taken from Vladimir Putin’s reaction to the apartment building bombings in Moscow in 2009.