No Ordinary Family! [published in English by NorthSouth Books in 2013. ISBN 9780735841499], a picture book by the German illustrator and writer Ute Krause, dives right into the topic of family. That’s exactly how the story begins: I have a really big family… But it’s a big family for an unhappy reason: the parents of the main characters, little bandits, are divorced. The mom and the dad argued until things became unbearable, and the dad went off to live separately. Later, he married a queen, and they had kids, princesses and princes. Of course, the little bandits had something to say about this turn of events. 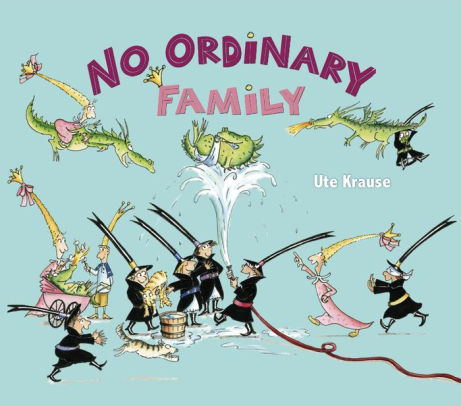 I once read in a psychology book that divorce is harder on a child than a parent’s death. It is more tragic and detrimental to a child’s confidence. It seems that when a parent leaves, a child inevitably perceives it as a betrayal. Parents might see the situation completely differently. A parent can tell themselves over and over that they still love the child and will continue to be a part of the child’s life, provide financial support, and that the distance will make things better. This (both the support and the things getting better) can be true since constant arguing between the parents isn’t conducive to a stable family situation. It would be wrong to suggest saving the marriage no matter what. But the child will be afflicted because of the divorce, and it should be taken into consideration.

This is exactly what Ute Krause’s book is about: the way these things happen. It's about a child’s reaction, about a child’s attempt to straighten out on her own the family life that has gone awry.

The first thing you notice in the illustrated world of the bandits are the long, split spikes that top their black hats, both children’s and adults’. The hats are never taken off, and it seems that the spikes grow right from the characters’ heads, symbolizing their all-consuming aggressive anxiety. Of course, the young bandits act just as you’d expect: they are very active and turn everything upside down at the first opportunity.

For the princesses and princes, the prickly sharpness of their headgear is slightly dulled by the little balls that top their crowns. Fittingly, they're better behaved and more passive.

The word “love” never appears in the book, and neither does “jealousy,” “divorce,” or “spite.”  The little bandits, who are the protagonists, don’t yet know the “adult” names for things. They simply describe the things they have to do: go back and forth with small suitcases (from the mom’s house to the dad’s), play with nasty princes and princesses. Sometimes they indicate their feelings in passing, saying that they want to spend time with just their dad or that they’re bored. Sometimes these feelings manifest themselves through descriptions of day-to-day life, like how they have to have two of everything now and even celebrate holidays and birthdays twice. This is a sort of bad doubling that conveys how wrong things feel.

The little bandits think that it’s fairly easy to rectify the situation: they just need to get rid of the competition for the dad’s attention. That’s how they proceed, driving the princes and the princesses out of the royal house where the dad-bandit now lives. Their idea is ingeniously simple and cruel: they catch a bunch of mice and let them out in the royal children’s rooms. Horrified, the princes and princesses rush out of the house. The queen-mother follows them. The little bandits are ready to celebrate the “liberation”: now things will get back to normal. Even though the dad lives separately, they’ll have him to themselves. However, things get worse for everyone, including the little bandits.

The dad’s grief over losing his loved ones prompts a real inner transformation in the little bandits. They understand that they must put things right. They set out to search for the princes and princesses. This is a completely different type of activity, one that’s positive and constructive. In the language of psychology, the little bandits choose to develop a good relationship with others under not-so-good circumstances, and they succeed.

The dad isn’t just happy about the return of the queen, the princess, and the princesses, who the little bandits pull out of a swamp, he’s even happier that everyone now gets along.

Apparently, to solidify this emotional win, and to increase the number of family triumphs, the little bandits’ mom marries a dragon. We find out from the pictures that in addition to her dragon husband she also acquires a brood of little dragons.

This, of course, is a joke from the author. This absurd ramping up of the abnormalities forces us to see them as normal. What else is left to do here? Just joke and transform the world on a new basis. In the end, when the whole blended family is having a party, you get the feeling of complete “peace and friendship” and even a strange harmony that arises in the world of changed circumstances.

Traditionally, a family is understood as a mom, a dad, three children and two sets of grandparents. This model triggers a lot of questions, and the first one is When was the last time you saw a family like that? What if the grandparents live separately? What if there’s no dad (or no mom)?

At one time, I participated in a round table at the Center for Curative Pedagogics in Moscow. We discussed a question that seems very distant from the subject of Ute Krause’s book: what to do about the problem of orphancy in Russia.

This was the answer: to fully support families just the way they are. But to do this, we must first internally agree with the definition of family as it's stated in the UN’s Convention on the Rights of the Child ratified by Russia: a child and “parents, legal guardians, or other individuals legally responsible for him or her”. This is very far from the traditional understanding of family.

A family that went through a divorce is still a family, and its members have to establish who they are and rebuild their lives. It’s better if a father doesn’t disappear forever, even when there’s an addition in the form of princes and princesses.

It turns out (according to Ute Krause) that the main thing is not to cultivate aggressiveness inside oneself. As I was saying, this book is about love.