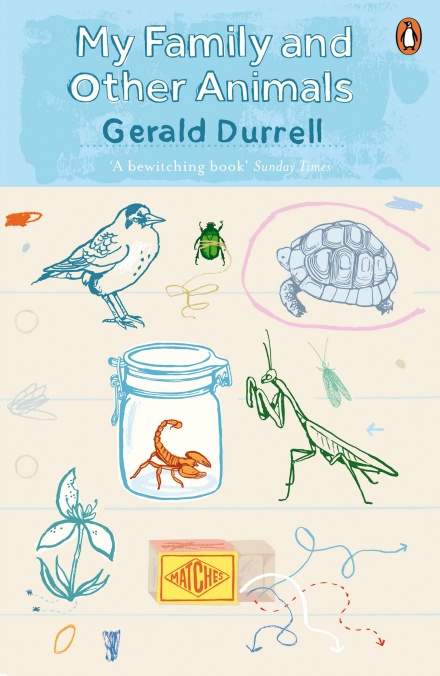 My mom recently gave me a book by Gerald Durrell called My Family and Other Animals [most recent English edition: Penguin, 2017. ISBN 9780241981696]. “What a strange title!,” I thought. “Maybe the story is written from the point of view of a little animal?“ But it turned out that  it was the story of the author’s childhood on the island of Corfu. I’ve read other novels about childhood, but this one is completely different. Durrell loved animals, and lots of them lived at home with him, like in Noah’s Ark. He saw them as family members and made them characters in his book, along with his human family. Sometimes I felt like I could hear their voices, just like I could “hear” his mom, brothers, and sister. They always had funny adventures happen to them. Once, Gerald’s older brother Larry wanted to smoke and took a matchbox down from the mantel. He opened it and a scorpion jumped out, all covered in little scorpion babies. They scattered across the table, disrupting the family’s breakfast.

Larry would grumble that Gerry was constantly filling the house with animals. Gerry’s sister, Margo, almost always took her younger brother’s side and defended him. Leslie, another one of Gerry’s older brothers and an avid hunter and yachtsman, also supported him in his obsession with animals. But even he got mad when he decided to take a bath and found two water snakes swimming around in the tub. Their mom was surprisingly calm about all these little incidents. There was almost nothing that could faze her. She supported all her children with their hobbies, because she loved them all. It must have been pretty hard to live in a house with so many different people and animals and keep it all in order. There are four of us kids in my house, and we have a lot of fun—we play and make noise, and by evening the house looks like a swarming anthill. And that’s with just one pet—our cat Findus.

As I read, I was a little jealous of Gerry. It sounds great to be ten and live such a free life on an island! You swim when you want and as much as you want and if you get hungry, you can pop by your friend’s house, where they’ll treat you to a bunch of grapes. Or you roam around the island alone and collect new specimens for your menagerie, or you join your big brother on a hunt. You can go out for a ride on a boat, too.

Plus, you don’t need to go to school, because there was no school where Gerry’s family lived. The teachers did come to their house, though. The first teacher was Larry’s friend, who had suggested the family come from England to Corfu. He quickly realized that he couldn’t treat Gerry like a regular student, so he decided to try a different approach. For example, they learned about the Battle of Trafalgar while they were out swimming in the sea. Seagulls flew over their heads and the teacher immediately came up with a story that Admiral Nelson was warned about the approaching French squadron by a friendly seagull. Of course, Gerry never forgot what his teacher taught him about the battle. Once, the boy was lucky enough to meet a real biologist, who saw a fellow zoologist in him. The scientist, Theodore, spoke with him as an equal, and was surprised by everything he knew. Gerry was allowed in his work office. Theodore showed him all his collections and even gifted him a real pocket microscope. So, in a way, Gerry learned a lot more than if he had just gone to school. Lots of unusual people helped him in his studies of life. Maybe that’s why he became such a wonderful writer.

I too love to roam on my own and study the world, though I’m not as passionate about biology as Gerry was. I think this novel is great not just for animal-lovers but any curious person with a sense of humor. Because My Family and Other Animals is also really funny!