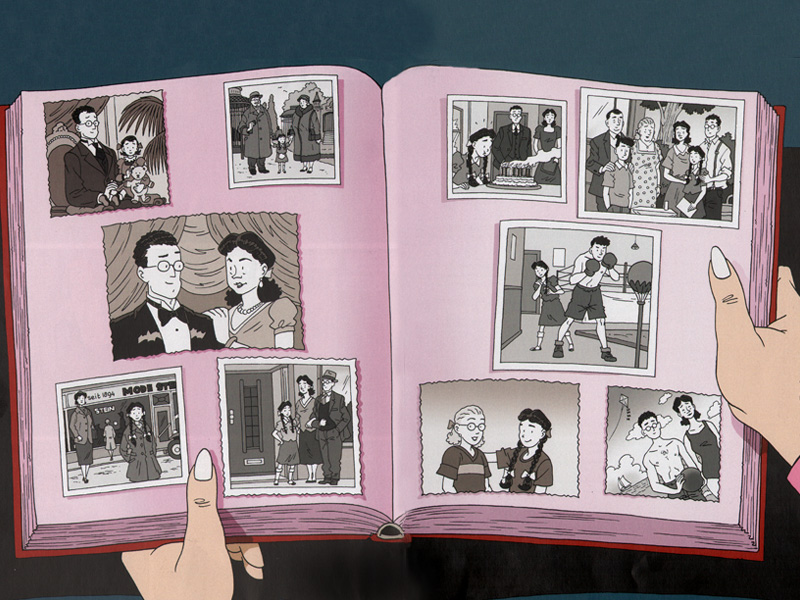 When I first saw The Search (most recently published by MacMillan Children's Books in 2011; ISBN 9780330519762), I was bewildered. Horrified, even. It seemed provocative, almost wrong: there among the lighthearted comic books was a book that couldn’t, by definition, be funny. From the very first pages, the editors do remind the reader that The Search, by Eric Heuvel, Ruud van der Rol and Lies Schippers, is not a comic book, but a graphic novel. It’s the story of the Holocaust in pictures, written by its Dutch authors for today’s teenagers. My preteen boys, already familiar with the words “concentration camp” and “striped pajamas,” couldn’t pass this book by. 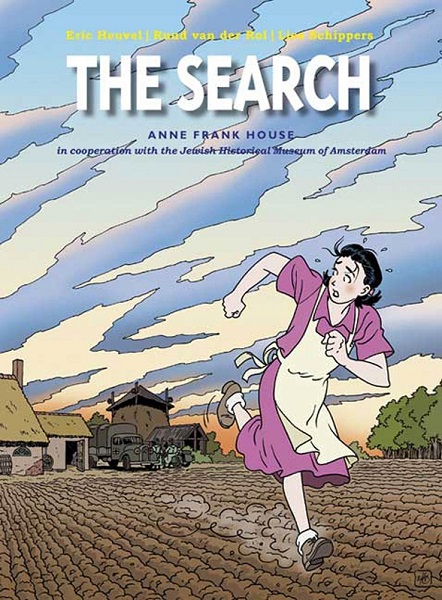 Today, the boys and I open to a new page of World War II history. We look at it from a new, unfamiliar angle—through the prism of countries and nationalities. Germany, the Netherlands, the United States, Russia. City names flash before our eyes. Sometimes, it gets hard to follow the timeline of events and keep track of the character’s changing locations, so we “rewind” to earlier pages. Amsterdam, the Dutch Theater, Westerbork, Auschwitz, Amsterdam again, Israel….

The reader watches the history of World War II unfold through the eyes of Esther, a Jewish girl born in Germany in 1926. The tragic events in her life hew closely to the historical record. This fictional story is one that was typical for thousands of such families.

It’s 1933. Hitler comes to power and Esther’s father suffers the first losses at his medical practice. Meanwhile, at school, Esther gets seated away from the other, “unblemished,” children. In 1935, Germany adopts the race laws and Esther’s family decides to take a chance and flee the country. Even many years later, the heroine finds it painful to recall that period of her life.

Back in our times, Esther and her grandson try to figure out what happened to Esther’s parents during their last months in the Auschwitz concentration camp. These sixty pages of pictures with their laconic explanations and dialogues are ones that my children reread again and again.

As they read, the boys ask why Hitler hated the Jews so much. They try to find their own answer. “Hitler wasn’t a Jew and he wanted to be the most powerful in the world. After he killed all the Jews, he would start killing other people, to be their leader.“ “If Hitler hadn’t lost the war, maybe we wouldn’t even be here today. Or we would be his slaves.” “Germans can never make up for what they’ve done.”

My sons notice and discuss the details an adult might skip over: the stripes on a German uniform, the contents of the prisoners’ baggage. They wonder how people wrote notes in the camp, when they didn’t have paper or pens. Sometimes they try to hide their emotions behind a show of bravado that holds their true feelings back. Later, they leaf through the pages on their own, alone with the book.

The pictures, in the restrained, austere style of acclaimed illustrator Eric Heuvel, shift gradually from bright colors to grim blue-brown tones. A gray-and-white palette represents the end of 1944, with gray stripes on the clothes and white snowdrifts. Heuvel studied to be a history teacher and this book is not his first artistic entry into the topic of war. Among his notable works is A Family Secret, a prequel to The Search.

In a sense, an illustrated version of tragic historical events is the perfect format for thoughtful preteens, ages nine to eleven or so. The pictures help them visualize the text, but leave room for imagination, inferences, and an emotional response. The unprepared psyche of a child is protected, as much as it can be, by the pictures. Historical photographs, real images of true Holocaust victims—all that will come later. It’s too early still. And yet the book has answers to many questions a child might have while reading.

For some questions, however—the most difficult ones—you’ll have to search for your own answers. How should we feel about the neighbor, a policeman who helps a Jewish family he knows, but remains a Nazi and continues to wear a swastika armband? Or how can two train drivers, who realize that they are driving “death trains” to Westerbork transit camp, resolve their moral dilemma? The boys and I try to find the right answer and come to understand that, in some circumstances, it is very difficult to choose between “yes” and “no.” Sometimes, it’s next to impossible.

Looking closely at the illustrations, we reach the point where there is an uprising in the camp and prisoners set fire to the crematorium. Ivan is convinced that the uprisings were essential: “If all the gas chambers and barracks were on fire, then the prisoners would be led out of the camp, and some could manage to run away. The Nazis couldn’t shoot everybody. And if all the Jews had risen up against them, maybe the Nazis would have surrendered. What if the 440,000 Jews brought from Hungary all refused to work for the Germans?”

The boys find it absolutely right that there is now a memorial where the concentration camp once stood. “Maybe we can go there one day?” Maybe. This past summer, we used to walk past the famous Yad Vashem Holocaust Museum in Jerusalem, where the most important exhibits are closed to visitors under ten. So we are too young for that still. We won’t rush growing up.

I consider how to explain different nationalities to the children, without building barricades. There’s Jerusalem, a city of three religions. In the Old City, the Armenian quarter gives way to the Christian Quarter, and that in turn flows into the Muslim and the Jewish Quarters. It’s just like our Moscow neighborhood, where the Orthodox cathedral stands side by side with an Armenian one, with a mosque on one side of the two churches, and a synagogue on the other. It’s a notable diversity of spiritual faiths. We need to erase the lines between us, take down the “walls” between these temples, remove the boundaries that separate “us” from “them.”

Of course, The Search (or graphic novels as a genre) are not the only way to broach serious subjects with preteens. They’re simply an accessible option, one that is no less emotionally charged than the rest. A fictional life, woven of feelings, experiences, events, and dates makes more of an impression on our memory than dry facts from a textbook. This graphic novel, published in the Netherlands by the Anne Frank House in 2007, is the work of dozens of Dutch and international experts, including Holocaust memorial museum workers, school teachers, and students. In the EU, The Search has been used in classrooms for years, while in Germany it is part of the official school curriculum.