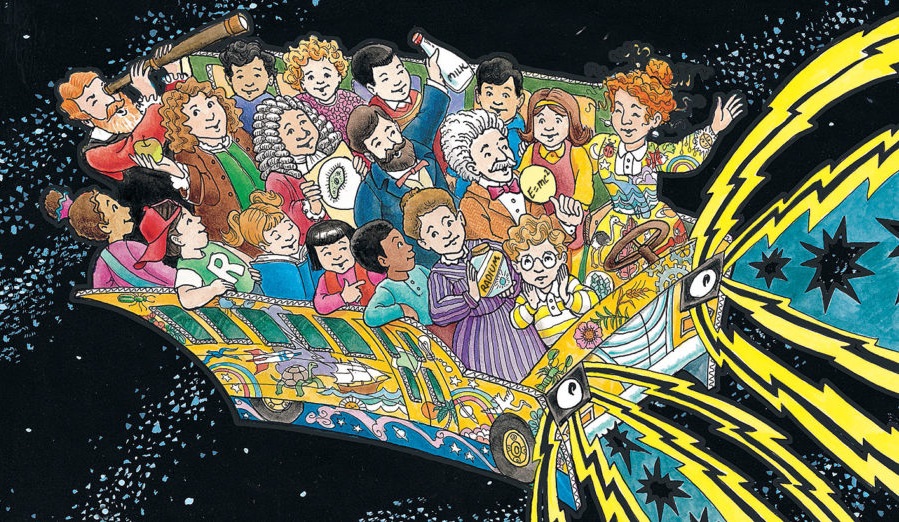 Several generations of American children have now grown up with the Magic School Bus Published by Scholastic.  picture books, which feature thrilling field trips led by the all-knowing Ms. Frizzle. The original School Bus series comprises ten books, each of which, frankly, deserves a separate review. But since these books feature the same characters, structure, and approach to explaining the material, we’ll address the series all at once. This way parents and children can choose the topics they find most interesting. That won’t be an easy choice, of course!

These natural science “travel books,” for kids ages six and up, introduce all kinds of natural phenomena: electricity, the human body, hurricanes, the dinosaur era, the properties of water—in short, everything and anything. And it’s all presented in a way that makes even the most difficult subject matter clear to children.

Each book is built around one “themed” field trip. It’s a literal field trip—a (safe) adventure for Ms. Frizzle and the children in her class. Ms. Frizzle is no talking “robot” who’s just there to present the information. She’s a wonderful character, reminiscent both of Mary Poppins, and of the wizard-professors of Hogwarts. Ms. Frizzle, however, makes use of her magic powers to introduce children to natural science. This approach upends our sense of a divide between the world of science and the world of fantasy. In the series, by Joanna Cole and Bruce Degen, the world of natural phenomena is the most fantastical thing. Here, the fact that Ms. Frizzle uses various magical ruses to teach children about the natural world, seems like an obvious choice. Even her clothes are unusual. In each book, the children first see the theme in their teacher’s dress, which always has a pattern to match the day’s adventures. At times, her outfit is almost over the top: when the children are set to learn about the five senses, the tongues on Ms. Frizzle’s shoes look like actual human tongues. In another book, as her students are about to embark on a study of insects, her dress is embroidered with bugs. 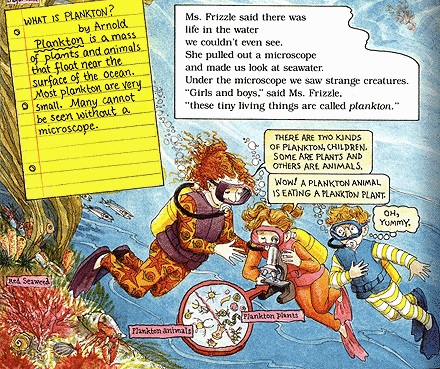 Having a “magical” teacher shouldn’t be such a surprise—it’s quite natural. We often say: “That teacher does real magic! He really engages children in his subject!” All those metaphors take on material form with the Magic School Bus. Ms. Frizzle literally engages her students: “[Ms. Frizzle] jumped up to the pipe, pulling us along. In a second, our whole class was inside the steam pipe.”

If Mary Poppins is the perfect nanny of children’s literature, Ms. Frizzle is its perfect teacher. She’s endlessly energetic and full of educational fervor. She sees no boundaries when it comes to educating children. Every time Ms. Frizzle tells the kids what they’ll be studying, they load up into the Magic School Bus. She drives the bus herself at a breakneck magic speed, with a clear sense of where to go and how. The bus travels to a place where time and space magically transform—into the past of dinosaurs, the eye of a hurricane, a human stomach…

The direction of the bus is set by the vector of learning: going deep inside the subject matter. The bus and the kids shrink to a tiny size, equal to the scale of whatever the teacher is showing her students, whether it’s cells, molecules or electrons. No matter where the kids find themselves—whether it’s in blood, an electrical current, or inside a bee—they’re always just the right size to get a good look at their surroundings, and take in all the details. Ms. Frizzle’s students get to see the microscopic world around them just as any other child sees her world. As a result, the effect of the books is that the reader gets his own taste of other “worlds.”

The illustrations enhance this sense of immersion. They serve as powerful visual aids that show us the landscapes the children find themselves in. For example, there’s the inside of a stomach, where the “the walls of the stomach moved in and out...and digestive juice splashed the [bus] windows.” Or the inside of a wire, with electrons coursing swiftly through it, with the children passing among them.

The illustrations are also great at showing the children’s reactions to what they see. Those reactions range from sincere interest to nausea, depending on each character. We come to know their personalities through their facial expressions and the phrases and exclamations in speech bubbles throughout the book. Ms. Frizzle’s class is full of distinct individuals. The emotions on the characters’ faces, their unique reactions—all this lends an air of credibility to the story. As a result, the reader is left with vivid impressions and clear understanding of, say, the inner workings of the stomach. 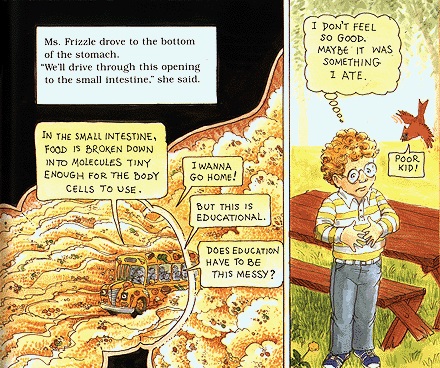 The bright imagery and eventful narrative is a particular strength of the Magic School Bus series. Boring explanations are often par for the course in popular science books. But here all the explanations needed are “embedded” in the action: “Looking back, we saw a white blood cell chasing the bus...The doors of the bus flew open. We were swept out of the bus and into the bloodstream. ‘Everybody hitch a ride!’ called The Friz. Each kid grabbed a red blood cell as it went by...The next thing we knew, we had flowed into the heart.”

The action is constant. The heroes are always on the move, as is the subject matter, and the focal point changes. This dynamic format shows the readers that learning is not only fun, but also not safe. That lack of safety, too, may the reason it’s so thrilling. And there we have to give credit where credit is due: Ms. Frizzle never forgets that safety comes first. Depending on the circumstances, her students will find themselves wearing life vests, spacesuits, fire suits, or any other necessary equipment.

Aside from the primary text narrating the children’s adventures, there are texts on other “levels”: speech bubbles drawn into the illustrations (the ones that show the kids’ reactions), as well as student reports in the fields of certain pages. These are generally very short, and serve to define new concepts and provide additional information. Since they’re written by the child characters, they’re exceptionally clear and memorable and they pick out the facts that a child might find most interesting:

A Science Word by Dorothy Ann

“Digestion” is from a word that means to divide. When food is digested it is divided into smaller and smaller pieces.

The words “smaller and smaller” are exactly the ones a child would use and at the same time, they’re perfect for explaining the concept. These children’s reports stand in for fact sheets.

The Magic School Bus can ride right into the heart of its most cautious reader, even one who doesn’t much like books, or care for popular science. The length of each book, its abundance of funny pictures, the writing broken up into sections, and even the different fonts—it all serves to pull a child into this reading “field trip.”

The books, especially taken as a series, can be an excellent trampoline to independent reading, reading that is meaningful and informative.

So let’s ride on the Magic School Bus!