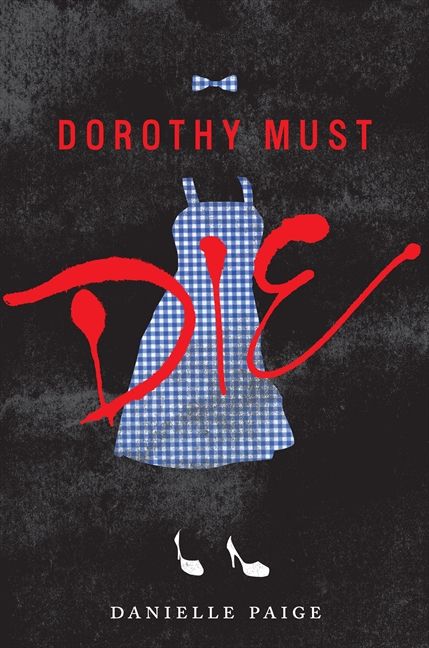 Dorothy Must Die Most recent English edition: HarperCollins, 2015. ISBN 9780062280688.  is a debut novel by Amrican writer Danielle Paige. It has been developed into a series, which currently includes seven books.

It’s the usual scene at the playground: a mom smiles and kisses her child’s bruised knee. He’s already laughing through his tears, even as he lets out the odd sniffle, just in case. He still believes that his mom’s kiss will make it all better. A bunch of older girls stand around the jungle gym, arguing over whose teacher is the smartest and most beautiful in the world. And I’m the teenager, sitting on a swing, waiting for my mom to come home from work, since I’ve forgotten the keys to the house. For me, the time of wizards and their magic has passed.

I’m guessing every small child has once dreamed of ending up inside a magical story and would never say “no” to a magic show. The brave child might run up to pull the rabbit’s long ears or grab a fluffy paw. A more cautious little viewer will cling to his mother, transfixed as the door to the world of magic opens before him.

Amy Gumm, the heroine of Dorothy Must Die, is lucky. Like Dorothy, of L. Frank Baum’s The Wonderful Wizard of Oz, she gets swept up by a tornado. Her trailer flies from Kansas over the mountains into the magical Land of Oz. There’s just one catch—this land is nothing like the Oz of the classic story.

The beloved characters are more like illustrations in a forensic psychology textbook than the plush toys of a cartoon. The Cowardly Lion feeds on others’ fears. By frightening others, he becomes stronger. But he also can’t live without this sense of power. Fear from others is like a drug for him, and he can’t get enough. The Tin Man makes himself into a killing machine. He’s replaced his fingers with needles and blades, instruments of torture. When Amy meets him on her way to the Emerald City, she barely recognizes him. All that gives him away is the upside-down funnel on his head. The Tin Man thinks that only by changing himself can he win Dorothy’s love. Meanwhile, the Scarecrow conducts terrifying experiments on people in the hopes of extracting serum to make his perfect brain work even better.

The characters’ fulfilled dreams have become their obsessions. Dorothy, the little girl with the ruby slippers, has grown up. She wanted ever more love, adoration, and power. Once home in Kansas, she went back to being a regular schoolgirl, sitting at a desk, dealing with classmates, solving fraction problems, presenting in front of the class. In the evenings, she would come home to a pile of dishes and the endless cleaning needed to rid the house of dust from the country roads. Was that fair for a girl who killed two powerful witches? Dorothy found a way to get back to the land of the Munchkins, and this time she made their lives hell. She took all the magic of the land and forced everyone to serve her under penalty of punishment. She’s not about to let another girl from Kansas start on the Yellow Brick Road. That’s why Amy Gumm ends up in prison almost as soon as she sets foot in Oz.

In this world, good and evil have traded places. Dorothy fights with the Revolutionary Order of the Wicked, which saves Amy from execution. The Wicked Witches believe that only Amy, from the other side of the mountains, can kill the girl that has become their nightmare. But first she must become the perfect warrior. Amy must sneak into the palace to deal her adversary the fatal blow.

For the Land of Oz to live, Dorothy must die. But is that really so? Is Dorothy acting alone, or is there someone more tricky and powerful behind her—someone who, like an invisible puppet master behind the curtain, is pulling the strings?

Danielle Paige’s story doesn’t end and Amy has yet to find the answers. But what is life like in her own world if, having ended up in this awful fantasy, she doesn’t want to go home at all?

Oz is a magical place. It gives anyone who ends up there exactly what she didn’t have in her own world. Little Dorothy, who played alone with her dog on the Kansas plains, got true friends and magic. Now teenage Amy gets the chance to fight for her life and learn who she really is.

I think the story Danielle Paige tells is not actually about the Land of Oz, but rather about the world as a teenager sees it. The familiar suddenly becomes foreign and hostile and age-old truths seem stale and fake. The book serves as a reflection of what happens in the inner world of a teenager. The author paints an ugly, disturbing picture. On the Yellow Brick Road, Amy makes a new friend, a girl named Indigo. The Tin Man dissolves her in acid. The Scarecrow takes the body of Jellia, Dorothy’s head maid, reanimates it with electronic devices and makes the living corpse serve drinks at a palace party. And so the world tests Amy’s resolve. As she faces injustice and pain (others’ and her own), she decides to fight. Killing the enemy, as it turns out, is not all that easy. And will killing Dorothy solve all of Oz’s problems?

What did fairytales always teach us? That Good triumphs over Evil. But what if the good and the bad guys suddenly switch places and ideas of what’s good and bad lose their original meaning?

Danielle Paige’s Dorothy Must Die is the retelling of a classic tale. All the words in it are simple and clear, and the characters we’ve come to know and love wave to us from the pages of the book. It’s when we set off with them down the familiar Yellow Brick Road that we understand that something is off. The Scarecrow, the Tin Man, the Cowardly Lion and even Dorothy—they’ve all changed.

The first chapter of this modern dystopia takes us back to Kansas. Empty wasteland spreads out like a tablecloth laid out by a poor housewife. People here struggle to make ends meet and they are used to surviving any way they can. This was the world Dorothy came from, and the one in which Amy Gumm is now trying to survive. Fights with classmates, a lack of friends, struggles with her lonely, exhausted mother, who can’t stop drinking—these are among the conflicts so vividly described in the book. At times, Amy feels that her mom loves their pet rat more than her own daughter. In Kansas, pumpkins don’t turn into carriages, and rags don’t become dresses. Ordinary girls are left to waste their lives away in their small, quiet town.

Everything changes when a tornado takes Amy from the horrible place she calls home to a place where everything is much worse. The Land of Oz. The sky is no longer every shade of blue, the rivers don’t whisper to the travelers. The trees are silent and their ripe fruit lies on the dusty road. What happened to this place? Amy asks anyone who has not yet been killed or tortured. Dorothy happened, is the simple answer.

The reader will share Amy’s confusion. After all, everything that Dorothy has done to this place contradicts the story where she was the heroine. The book that Amy’s mother read to her when she was still sober exalted loyalty and friendship. It was her honesty and kind heart that helped Dorothy always come out on top, no matter the situation. Can such a kind-hearted person destroy her own people, burn villages, and use magic to do away with memories? What is written in ink can’t be rewritten in blood, but that doesn’t stop the new ruler of Oz from trying. Her evil friends cater to the Queen’s every whim.

As she travels through Oz, Amy starts to understand that this new world is literally dripping with magic. It’s rolled up in the petals of every flower, hidden under every rock, runs with the water, and sets with the sun. It flows through the veins of each resident of Oz, forms the basis of their minds, hearts, and courage. Magic is the cause of all troubles, too. It is a fickle friend and the one who masters it completely can change the world. Dorothy’s unexpected bloodthirstiness and greed have made the Land of Oz change for the worse.

The Tin Man’s cruelty rivals that of an executioner who beheads innocent people. Metal has chained his heart like armor and the Tin Man now believes that he is invincible. For this monster, honesty and conscience are twisted concepts, and his heart is the main source of his Evil. That’s why another girl brought from Kansas by a tornado, Amy Gumm, must first take the Tin Man’s heart.

The mind is the key to everything. It opens doors and allows one to see new solutions to problems. But only if that mind is your own, not stolen for selfish ends. Horrific, merciless experiments in the spirit of Dr. Frankenstein, screams from the basement, straw soaked in burning oil…. Mind in the service of evil is Evil itself. That’s why Amy Gumm must steal the Scarecrow’s brain.

The girl’s next objective is to take the courage of the Cowardly Lion. Only a brave spirit can do heroic deeds. All his life, the Lion feared those who were braver, and now he wants his revenge. The lion’s spirit is poisoned by bitter resentment and hatred. This essence is nothing but poison for the body.

Heart, mind, spirit—they’re all just organs, with nothing to tie them together. Dorothy is the real Wickedness in the flesh, with her steel heart, flexible mind, and a poisoned soul, and that is exactly why she must die last.

Friendship and enmity, Good and Wickedness—all are confused, not just in Oz, but in Amy’s own head. With time, Amy changes, like a river forced to flow in the opposite direction. The girl learns to fight, defend her ideals, and strive for victory. Her character deepens and she gains self-confidence and a sense of irony. We see that Amy can think on her feet, come up with the right decisions. But murder? Won’t that turn Amy’s heart to stone, like the stone that beats in Dorothy’s chest? Won’t she become like the Lion, if she starts to exact revenge and enjoy the fear of her victim? Will she turn into the Scarecrow while coming up with the plan to kill Dorothy? Will she be able to kill a human being, even a cruel, merciless one, just to see Oz the way it was in the book?

Even the experienced reader will be surprised to see where the Yellow Brick Road takes Amy Gumm. The author’s ellipses suggest this much—Wickedness concealed in an intelligent heart will always win out.

Translated from the Russian by Alisa Cherkasova
Book cover image: harpercollins.com
The reviews were originally published in 2018