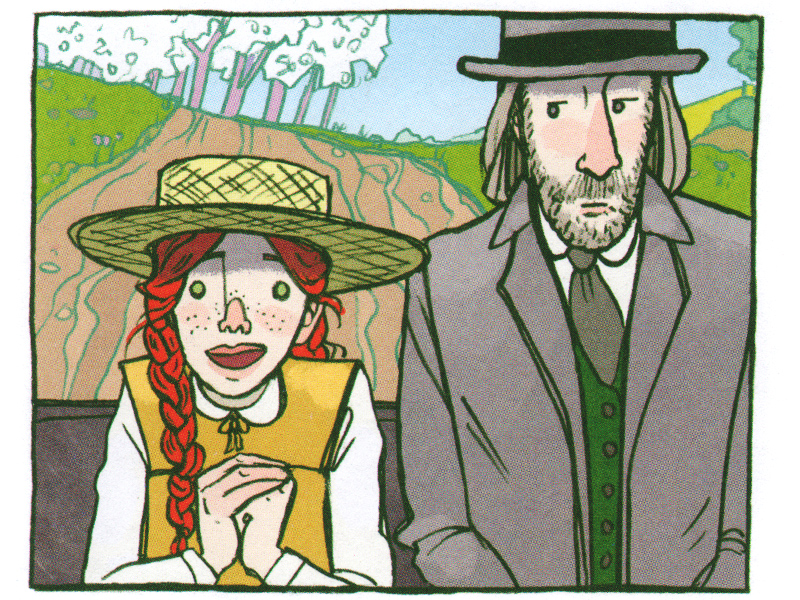 Anne of Green Gables: A Graphic Novel English edition: Andrews McMeel Publishing, 2017. ISBN 9781449494544.  has a sad, moving text and pictures that bring the story to life with excellent detail. This isn’t the first graphic novel I’ve read, but I can’t quite get used to this literary form. 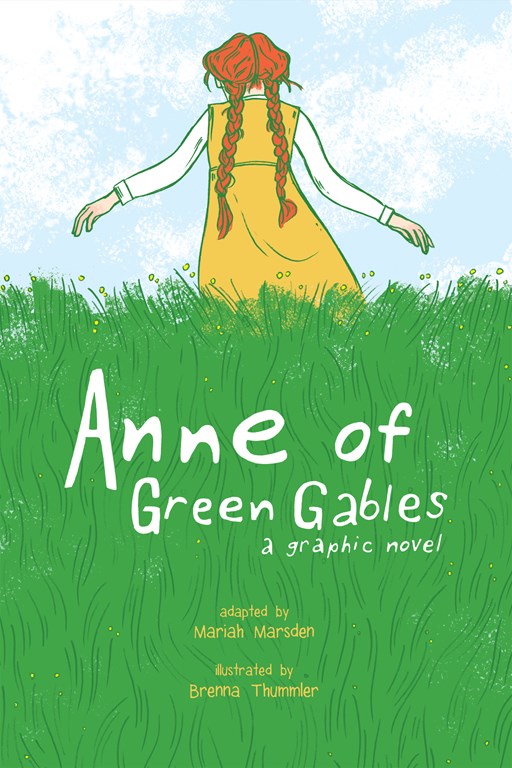 For some reason, I always want to compare a new book with something I already know and mentally I put the book and something more familiar alongside each other on a shelf. This time was no exception. I thought Anne of Green Gables would be much more like other books about children and animals—after all the “Green Gables” of the title refers to a farm. But I was wrong. The book was more sad and serious. It’s the coming-of-age story of a girl named Anne and the story of how an orphan can forever change the lives of the adults around her, about how to see your future by looking “through the window.” Anne is an orphan taken in by a brother and sister, Matthew and Marilla. They had been hoping they would get a boy who would help them on their farm, so at first they wanted to send the girl back. But Anne was so unusual! 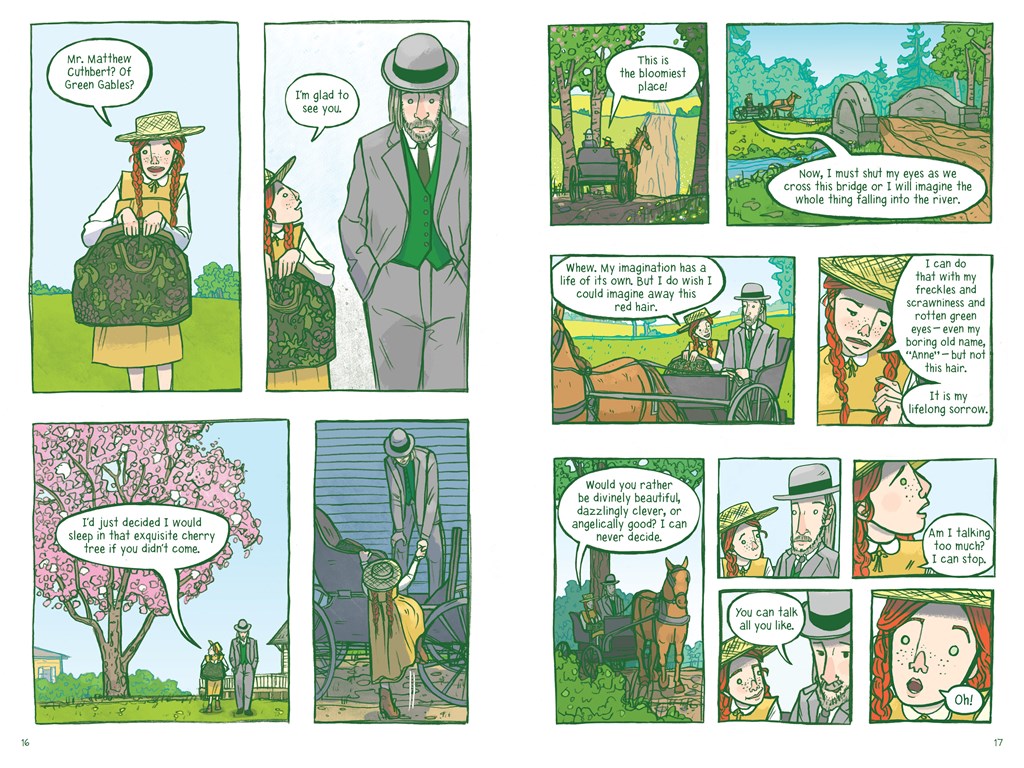 Anne’s sincerity, zest for life, daydreaming, kindness, and innocence are all apparent, but she is also stubborn, easily offended, and terribly unsure of herself. She often gets into awkward situations because of her honesty. She is rude to guests, causes arguments among the adults, and struggles to find common ground with Marilla, because Anne doesn’t believe in God—after all, He gave her that unruly red hair as punishment. Her directness and sincerity can annoy others (as it does Marilla) or touch people deeply (as with Matthew). Her very presence can bring on bright smiles or angry outbursts. Each new difficulty or argument becomes a test for Anne and gives her the opportunity to change, analyze, and grow in spirit. Marilla gradually softens and starts to care for Anne, while for quiet Matthew, the young girl is a revelation. Through her he learns to see nature, hear new sounds, and feel life more fully. It’s thanks to Anne that Matthew and Marilla, both lonely, quiet, and private people, begin a new life, full of its happy moments, doubts, and struggles. Matthew goes out of his way to buy Anne a dress with puffed sleeves, while strict Marilla lets the girl out to a concert and a friend’s birthday party.

The graphic novel is easy to read. Thanks to the bright, realistic pictures, the story feels like a real, deep narrative, rather than a cartoon or comic. The mischievous, freckled, red-haired girl comes to life on the page, and bubbles over with everything she sees and feels. I saw my ten-year-old self in Anne, and recalled how I used to run around the garden, talking with birds, inviting the peonies to have tea with me, watching the ants circle around a tree branch. I spoke with everything that breathed, grew, and listened around me. 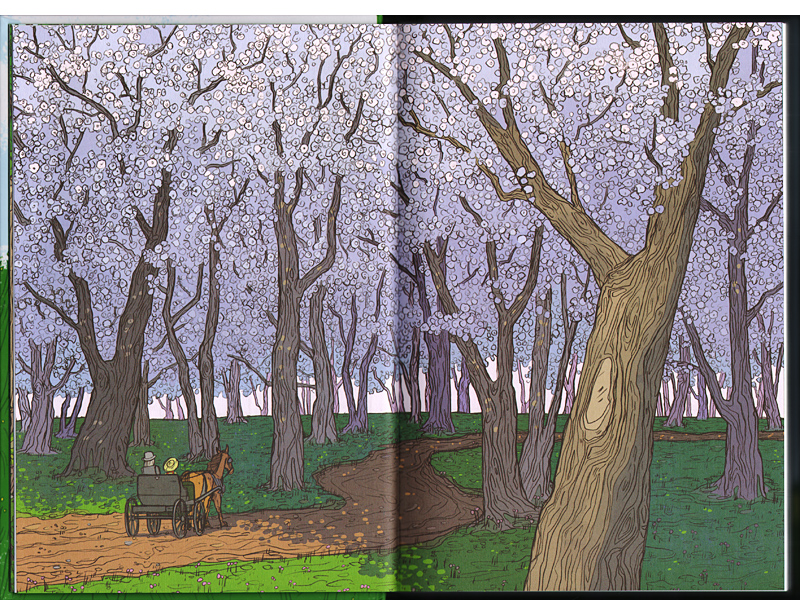 Even though the peonies never came by for tea, and the birds never reacted to my stories or told me their own, I had the sense that I was living in a castle and the puddle in the yard was a moat, defending me from unwelcome guests. My grandmother had currants growing in her garden and I imagined that they were grapes from gardens of Paradise—try just one and when the juice touches your lips you forget all your troubles and become happy….

This attitude toward the world around her helps Anne overcome difficulties and stay so direct, open, and sincere. These are the qualities that attract others to her.

Anne really wants to get into the advanced class, to prepare for entrance exams to Queen’s Academy where she hopes to get a teaching license. Marilla and Matthew support her in this dream.

And so Anne sets off for school in the city for a whole year! She’s both happy and sad as she watches Green Gables flash by in the train window. Tears pour down Matthew’s face and Anne, earnest as ever, tells herself she will always love Marilla and Matthew.

It is a difficult year for Anne. Her homesickness, first love, difficult studies—she often falls asleep at her books and Latin translations. But she studies diligently, hoping to earn the college’s prestigious scholarship and make Matthew happy. And so Anne wins the Avery Scholarship which allows her to continue her studies. Matthew and Marilla are proud of her, and that becomes Anne’s highest reward.

Summer brings another trial for Anne. She faces a difficult decision and she chooses to sacrifice her studies for those who raised her. She comes home, where she is most needed. She’s grown up but her child-like qualities—her kindness, sincerity and open-hearted trust—are still with her..