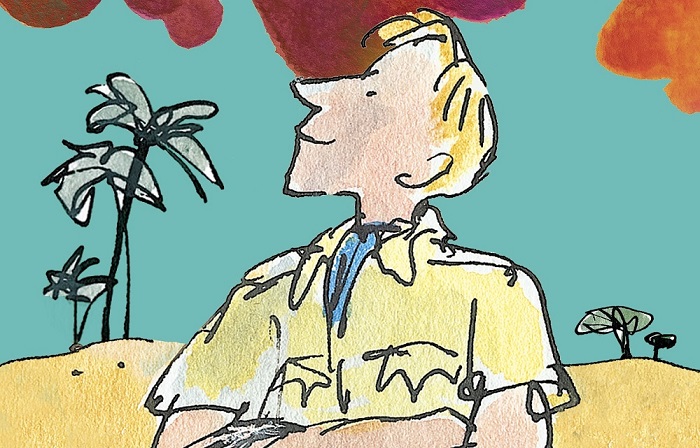 Roald Dahl’s two autobiographies tell the story of his early childhood and school years, and of his time as a WWII pilot. Read Papmambook’s teenage authors take on the books, which, as they’ve learned, show Dahl’s easygoing and kind personality and might even teach a reader some valuable life lessons. 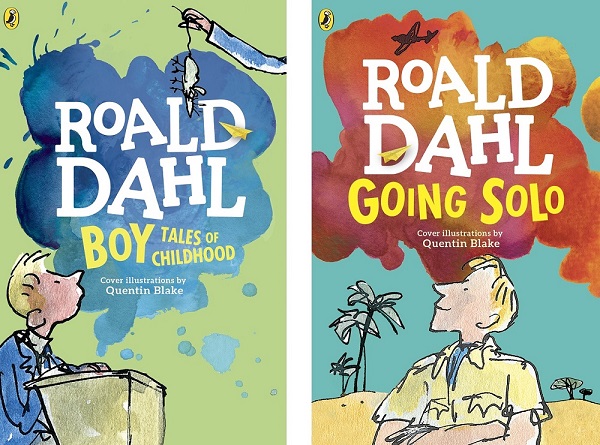 I’ve read several books by Roald Dahl and noticed that blurbs call him the ”World’s No. 1 Storyteller.” But I didn’t know anything about him as a person. Now that I’ve read Boy Most recent English edition: Puffin, 2016. ISBN 9780141365534.  and Going Solo Most recent English edition: Penguin, 2018. ISBN 9781405937535. , I feel like I know more about his life than anyone else’s. You can’t quite call these autobiographies. On the back cover, you have Dahl’s own words: “An autobiography is a book a person writes about his own life and it is usually full of all sorts of boring details. This is not an autobiography.”  An autobiography is a story a person tells about himself, in order, without leaving anything out, but Dahl’s story does have gaps, sometimes big ones. He writes only about the moments he found most interesting and unforgettable.

In the first book he writes about his family and childhood through the end of his school career. I was impressed by Dahl’s father’s resourcefulness. He lost his arm at age fourteen and in order to eat one-handed he sharpened the tine of a fork. That way he had a utensil that was like a fork and a knife combined. It was Dahl’s father who insisted that Dahl attend a British school, even though the family was Norwegian. That was his first school. Then Roald ended up at boarding school. Each student had his own tuck-box, that no one else could look inside. He spent the most time at his third school, where he became a champion in several different sports. But there was one unpleasant thing about this last school. Students were either House “Boazers” or “Fags.” The Boazers ordered the Fags about, making them do all kinds of dirty work. For example, the Fags had to heat toilet seats for the Boazers, since the toilets were in an unheated outhouse where it was very cold. The Fags had to heat the toilet seats with their naked bottoms so the Boazers would be comfortable. I thought that was very humiliating and I was glad we don’t have that kind of thing these days. Roald Dahl didn’t like it either, since he was Fag. But he never became a Boazer, because he didn’t want to boss anyone around or hit them.

The second book, Going Solo, is about Dahl’s life after school. He started working for Shell Oil, but in southern Africa, not Europe. He supplied oil to customers. When World War II broke out, Dahl volunteered for the Air Force and started flight training. One day, his plane fell in the desert, almost like what happened to Antoine de Saint-Exupéry. It was a miracle that he survived. I was amazed by Dahl’s story of how he went straight into battle after finishing flight school, even though he didn’t have any fighter skills. That’s when he understood why so many young pilots were dying—nobody cared about what would happen to them, everyone was worried about their own survival. Roald just got lucky. Then Dahl went off to fight in Greece, flew fighter jets and brought down the German Junkers and Messerschmitts. He would always feel relieved when he saw the pilots whose planes he’d hit jumping out with a parachute.

Reading Roald Dahl’s autobiographical books I understood how he came up with the plots for some of his most famous children’s stories. For example, I love Charlie and the Chocolate Factory. It turns out the idea for this book came to Dahl while he was still in school. Every Sunday, the Cadbury chocolate factory would send the students candy to taste. As he tried it, the boy would imagine himself working at the factory and inventing his own sweets. In a way, Charlie and the Chocolate Factory was about this childhood dream.

I noticed Roald Dahl had many good qualities I would like to develop in myself. He always finished anything he started, instead of dropping it halfway when something wasn’t working out. He was a person of many talents and interests and was able to combine very different passions. While he was in school he took up photography and once he became a pilot he took his camera everywhere and took pictures even while flying. I also liked that he never tolerated violence around him and even in critical situations—such as when he was at war—he tried to make sure everyone came out alive.

I deeply regret to inform you that your son, Second Lieutenant Roald Dahl, died in battle. All the servicemen and officers of the 80 Fighter Squadron of the Royal Air Force express their sincere condolences.

And now there’s no Charlie and the Chocolate Factory, no Big Friendly Giant, no Fantastic Mr. Fox. Because in this scenario, the great writer was simply never able to write them. Even Antoine de Saint-Exupéry finished writing The Little Prince before dying in battle over the Mediterranean in 1944….

Roald Dahl’s first flight was very nearly his last—he was given the wrong coordinates for an airstrip in the Western Desert. With his fuel running low, Dahl attempted an emergency landing and nearly died. This was far from the only such story that happened to the future writer during World War II and his service in the British Royal Air Force. Many more interesting, and seemingly unbelievable stories are described in Roald Dahl’s autobiographical Going Solo.

The book starts in the period just before the war, when Dahl takes the SS Montola to East Africa to work for the Shell Oil company. There he is set to encounter lions and snakes, and meet new people. Soon after war is declared he heads to Nairobi, Kenya, where he joins the British Royal Air Force.

From its very first pages, the book hooks you with its unusual storytelling. Books about war generally describe events seriously, almost sternly. They try to emphasize to the reader how awful the war was. Going Solo is written in a lighthearted, playful style, much like Roald Dahl’s other works. You get the impression that, for the author, the war was more of a dangerous adventure—sometimes sad, sometimes fun—than a terrible catastrophe.

There are no illustrations in the book, just black-and-white photographs from the war. I usually enjoy seeing an artist’s interpretations of a book’s events, but here, oddly enough, I preferred having just the photographs. Roald Dahl’s books are typically illustrated by Quentin Blake, and I personally don’t care much for his illustrations.

You would think the memoirs of a fighter pilot are more of a “boy” topic. But any reader can enjoy Going Solo, regardless of gender or age. The book is easy to read, doesn’t have endless technical terms or airplane comparisons, and is not so much about the war with the Nazis as it is about the people the author sees around him: soldiers, Africans, and many others.

If someone has a positive outlook on life, he can see—and tell us about—the good sides even in a terrible event like a war. Realists may grumble that such people live in a made-up world, but they are the ones who can find joy in every moment, no matter what.