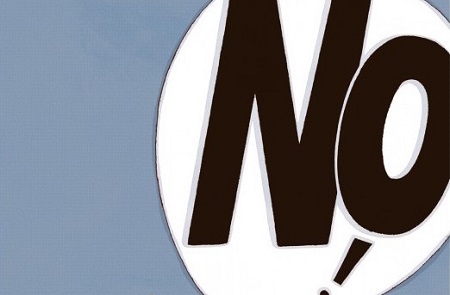 No! Newest English edition: Tiger Tales Books, 2015. ISBN 9781589252080.  is the title of the picture book by author Tracey Corderoy and illustrator Tim Warnes. The word graces the cover in big black letters. It’s the first word the reader sees. It weaves through the book from the first page to the last. On some pages, it’s the only word at all. Constantly, tragically repeated: No! No! No! 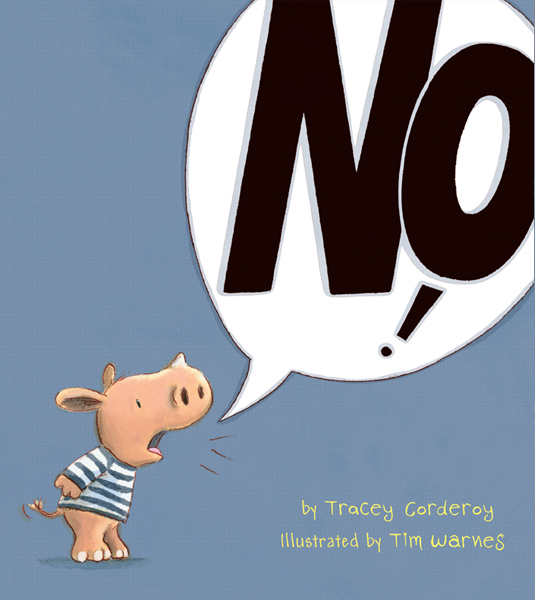 It’s this word that a little rhino named Otto (or Archie in the British editions of the book) one day discovers. The “no” becomes his curse. The word carries frightening power and soon displaces all other words.

Would he put his coat on?

Shall I take your lunchbox, Otto?

The word “no” completely and utterly transforms the main character’s relationships with everyone around him. It simply throws poor Otto out of his familiar social circles: he defies adults, and he can’t play with kids. 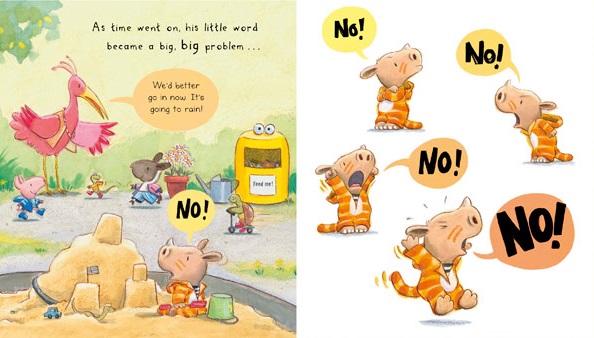 The pictures show us the inevitable transformation of the little rhino: he goes from a sweet, smiling open child to an unhappy, unpleasant, mean, and rude little person—one might even say he is possessed. At one point, Otto is alone with nothing around him but the word that has taken him captive: “No!” Otherwise, emptiness….

Otto is all alone. And at a certain point—the next page—the little rhino suddenly notices. Rain pours down, Otto is crying, and his little muzzle takes on a “human” expression again. Here I am! And I’m all alone! 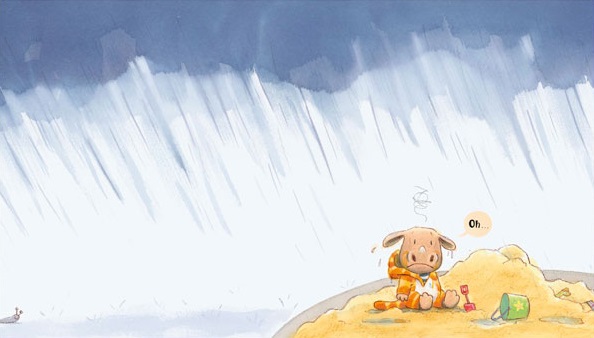 This little book titled No! tells the story of one of a child’s most significant struggles, the behavior crisis at age three. (Three is, of course, an approximate age “milestone.” The crisis could well come earlier or later.) Many adults know this period firsthand. It all starts just as it does in the book: “Otto was adorable. Everybody said so. ‘How cute!’ ‘Such a sweet child!’ ‘Adorable dimples.’ Then Otto learned a brand-new word….”

Of course, in real life we rarely mark the beginning of this period so clearly. We understand that it’s happening (or don’t!), when we are in the midst of the crisis. This period takes its toll on both the parents and the child and yet it’s impossible to avoid. It's very diffucult to manage this behaviour, but it’s critical that parents don’t lose it or succumb to despair. They’ll hear these words again once the child becomes a teenager. Understanding can’t magically change the situation, but it will extend your patience. The knowledge that what’s happening to your child is normal is comforting. It might also help to remember that the crisis at three is not all about negativity. Rather, both the negativity and that awful word “no” serve an important purpose.

Namely, the child comes to experience his separateness. The word “no” forces him to confront his familiar world and way of life and, as a result, leads him to the experience of loneliness. Behind the feeling of loneliness is the experience of separateness—of one’s individuality, if you will. The book’s authors clearly demonstrate to us that, for a child, this is an important, almost tragic, experience. In the end, it’s a productive one. The child, in this case “little Otto,” finds within himself the strength to break out from this vicious cycle of “no”—with the help of the word “yes.” It’s a huge personal victory. Just before he finally says “yes,” poor Otto seems to lose the ability to speak, and his eyes fill with tears. Crying is a saving grace, a release. The child’s cry is fundamentally charged with a social function: it’s an appeal to the adult. It’s an admission of helplessness and a request for help, the desire for a saving connection.

The little rhino’s dad picks him up and holds him close. We get a lump in our throats. We’re witnessing the children’s version of “the return of the prodigal son.” 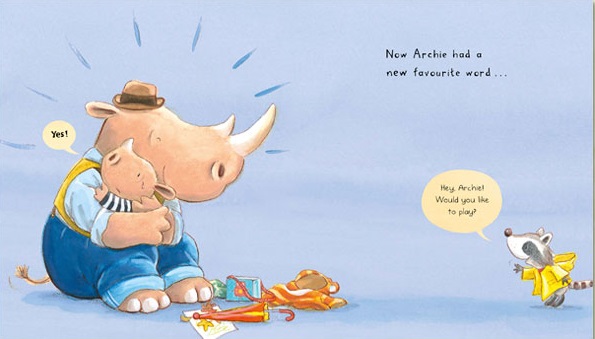 The end is an entirely happy one. Otto emerges with a huge “yes”—the only word on the last two pages. It takes the place of the awful “no.” Everyone sings and dances around a happy Otto. A rainbow is born from the rain. Hurray! Hurray! It’s a long way yet to those teenage years!...

This book is of course meant to be read to little ones that are three or four and is in no way an insurance against symptoms of the crisis. But children enjoy stories about themselves, ones where they recognize themselves, and can see themselves as though from afar. You can pretend it’s not you at all! They know you should listen to adults and that talking back is bad. And they know it the way a three-year-old child can: it’s knowledge that’s on the outside for now, not yet internalized. It seems somehow “attached” to the adults who preach it. It’s not easy to internalize—to make it a part of a child’s inner world.

Here, the “moral lesson” is carefully hidden from the child. She’s told the story of a behavior and the related experience. A child is given the freedom to interpret it as she will.

Five- or six-year-olds, on the other hand, will easily see the point. For them, it’s all ancient history, so they can respond critically. (A good age for critical thinking, by the way). They’ll delight in reading the book to themselves. The main point is immediately apparent: there are lots and lots of big “no’s”—and one big “yes.”