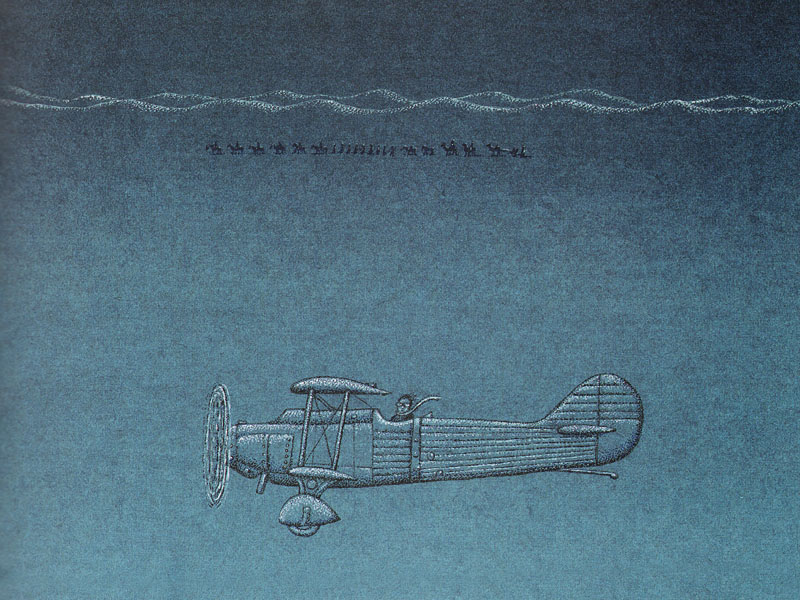 Airplanes—that eternal boyhood passion. As a child, my husband attended an aircraft model club. Today, he designs real planes. One after the other our sons, too, have caught the aviation bug. At home, we have last-century plywood biplanes hanging from the ceiling and plastic models of modern flying machines piled up on the shelves. In a house like ours, a book about the life of remarkable author and pilot Antoine de Saint-Exupéry was a perfect fit. It was the starting point of interesting conversations, not only about flying itself, but about the great importance of a childhood dream for later adult life. About what it means to really dream, so that your dreams come true.

Children ages eight to ten love biographies. It may be because at that age, they’re trying different life paths on for size or because biographies make the transition to the real world easier, as they gradually part with the world of fairytales. Children of eight have usually already run up against their first true problems and defeats and are quite clear on the fact that life offers no fairytale solutions, no magic wands or potions. They have to do things on their own. That’s when it’s particularly therapeutic to read the true stories of people who became great precisely because they were able to overcome seemingly insurmountable challenges and turn defeat into victory. As children read about the sheer amount of work that their hero put into achieving a goal, they train their inner, emotional muscles and learn to set their own goals, resolve problems, and find the inspiration to accomplish what they set out to do. I don’t know if this effect represents a general pattern, but it’s definitely proven true in our family. For my children, interest in biographies always portends a step forward in their development. Naturally, the quality and content of a particular biography also play a big role.

At first, Peter Sis’s The Pilot and the Little Prince Newest English edition: Pushkin Children's Books, 2014. ISBN 9781782690597.  bewildered Makar. When he saw the gorgeous biplane on the cover, he immediately grabbed the book. (Telling him that this was the story of that same Saint-Exupéry that wrote The Little Prince and was a real pilot contributed to his interest.) But when he opened the book, he froze. There was very little text, in a tiny font, and huge, bright illustrations that took up entire pages. Makar, it seems, had expected a long adventure story, but here…. It wasn’t quite clear what to do with all this, because the usual reading approach would clearly not work. He couldn’t quite figure out if he was supposed to revert to early childhood, with its picture books, or this was a sneaky move from the author and publisher. After all, the topic was serious enough—the life story of an interesting person. 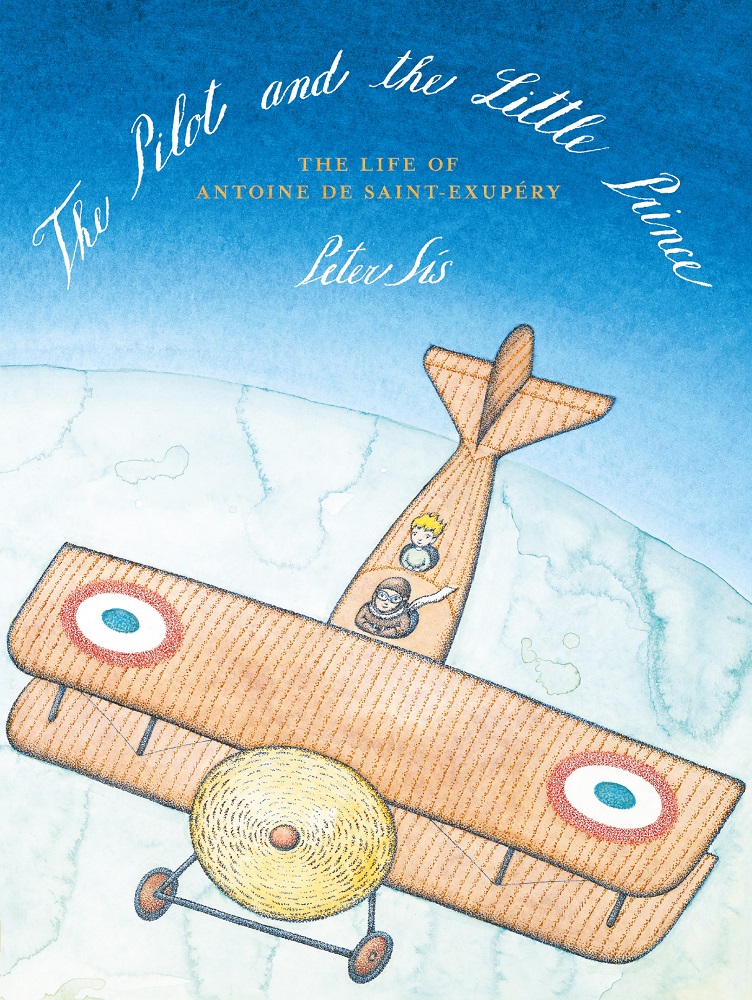 Although the book does provide a great number of important and unknown facts about Saint-Exupéry’s life, they seem to take a back seat to the illustrations. The real soul of the book is in the great, air- and light-filled illustrated spreads. And so The Pilot and the Little Prince is more like a graphic novel, a book to look at and ponder over, rather than a thick biography packed with details. The illustrations are not only impossible to separate from the text, but often represent a message of sorts in themselves, one for the reader to decipher. This was an entirely new experience for Makar, who was by now a fluent reader with no need for illustrations.

We decided there was something there in this unusual structure of the book and started to examine it together. We discovered that those huge aquamarine spreads, with the sparkling sea or smiling mountaintops glittering under the wings of an airplane, perfectly conveyed the joy of flight and Saint-Exupéry’s longing to tie his life with the heavens. When you look at them, the book sucks you in and you, too, are filled with the desire to fly. I think it’s a wonderful approach, one that allows children to feel that yearning for the sky, the hunger for adventures and travels. The many maps in the book have the same effect and they come to life with continents and cities taking on the forms of fantastic creatures, activating a child’s imagination and holding his interest. The sense of flight and motion accompanies you from the first page to the last. In the few places where the text makes an appearance, it often circles porthole-like pictures, so that you can read it only one of two ways—by spinning the book or turning your head. You get slightly dizzy, as though you are flying and doing barrel rolls or loop-the-loops yourself.

“It’s alright that there isn’t much text. This book will be interesting for kids who don’t like to read much,” concluded Makar with a sense of importance.

Even so, this is no activity book, but an actual biography of one of the greats. The life of a wonderful writer and pilot unfolds before readers like the chronicle of a dream coming true—year by year, taking us from a child’s fantasies to an adult’s decisive choices and plans. First we see a small boy born at start of the twentieth century, caught up in tales of adventure, then a twelve-year-old youth striving to take off in a self-made flying bicycle. Finally, several pages later, we accompany a twenty-eight year-old young man as he crosses the Atlantic, heading for South America in a plywood airplane, loaded with airmail. Along with Antoine, we survive a series of crashes.

At the same time, his path to literature reveals itself to us—through the stories of his fellow-pilots and his own adventures, which he often wrote in flight. Yet even that was not enough. Saint-Exupéry also wrote film scripts, parachuted, set records for flight distance, nearly died while testing a seaplane, and took part in the aerial battles of World War II. One day he takes off on a reconnaissance mission, never to return.

His fate is truly tempting for little boys. After ages seven or eight, it is especially important for them to see how other people experience difficulties and misfortunes, but don’t break, don’t turn from their chosen path, but keep on their way, finding ever new sources of inspiration. It’s the illustrations that translate these inner emotional experiences of our hero so poignantly, in a way that a long and interesting narrative could not. It’s as though, for a few instants, we can channel his spirit, feel what he does, and why he does it. We have plenty to discuss with the book open before us.

Saint-Exupéry’s life aligned chronologically with the era of aviation, so the book develops this parallel plot line—the history of different flight schools and professional flying. This may be more interesting for children who prefer the history of technology and inventions to literature and human psychology. The world of Saint-Exupéry will open to them in a different light. Children are surprised to learn that the first planes didn’t have brakes or parachutes and the first pilots took carrier pigeons on board with them, in order to send an SOS signal in case of a crash. They are impressed with the pilots’ courage, as they fly by night over the ocean without the radar and night-vision that are ubiquitous today. Now they will remember this name for sure—Antoine de Saint-Exupéry.

Despite the book’s unusual format, it’s a bright, truly boyish book, which is wonderful to look through, whether you are sprawled out on the floor or holding a flashlight under the covers. It’s a book for inveterate dreamers. Those that want those dreams to actually come true.

After reading The Pilot and the Little Prince, Makar spent weeks racing around the house with a wooden biplane: “Here comes Antoine de Saint-Exupéry!” Who knows what this game will one day bring?