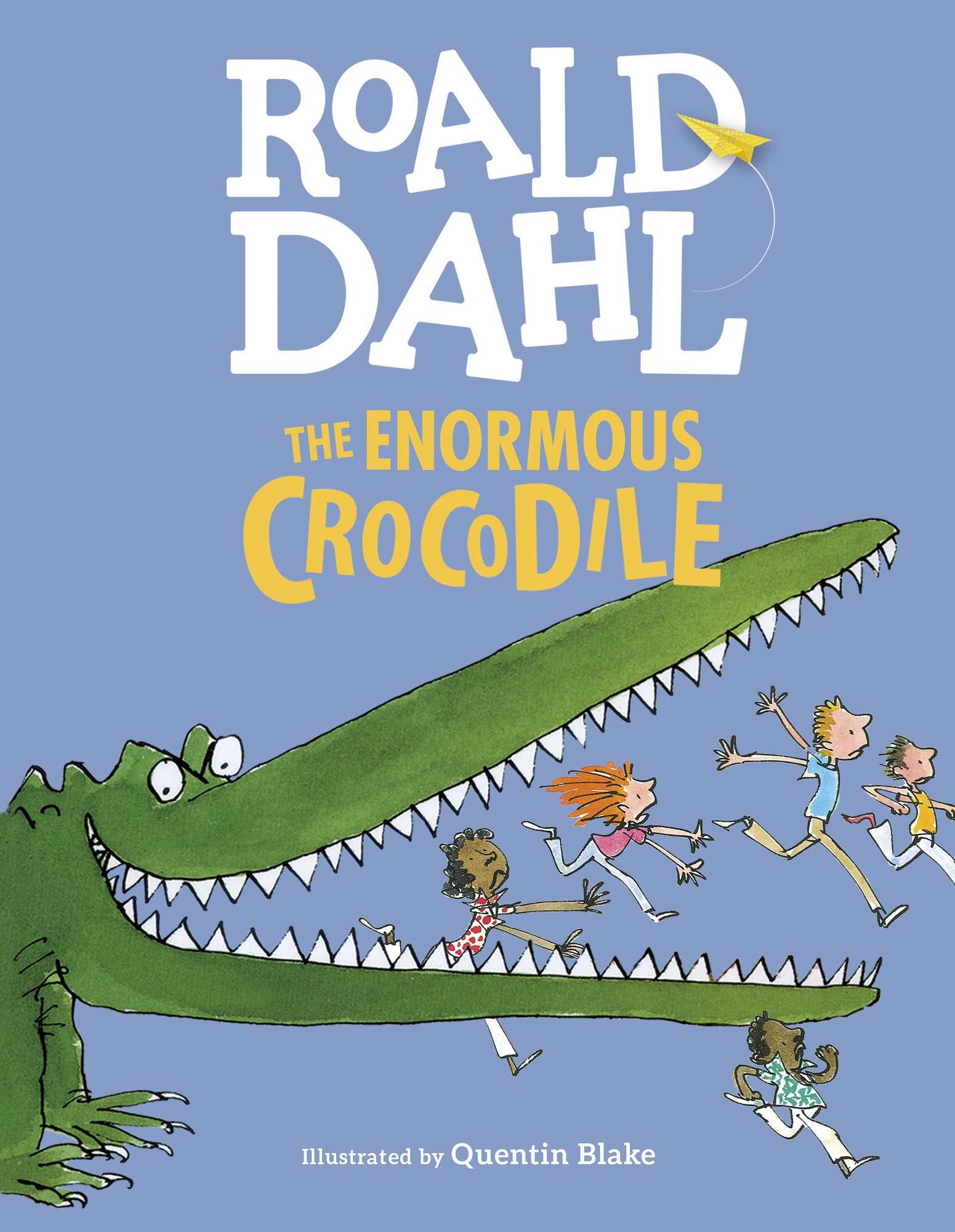 Little kids are usually so sweet, chubby, cute that you just want to hug them, and squeeze them...and take a little bite out of them. Juuuust a little bite. Not eat them. Any parent will recall some grandma, aunt, uncle, or other adult who picked a child up, made big, scary eyes at him and told him: “Mmm, you’re so yummy, I could eat you up!” This idea of eating children is probably as old as humanity itself: we find it in archaic folklore, in “Barmaley” by Russia’s own Korney Chukovsky, and in The Enormous Crocodile Most recent edition: Puffin Books, 2018. ISBN 9780451480002.  by Roald Dahl. And Dahl writes with such humor and tact that his book is perfect for any child over four.

It’s when they reach four that most children stop taking these joking threats of adults (“I’m gonna eat you!”) seriously. The time is ripe for The Enormous Crocodile.

I’m off to find a yummy child for lunch.
Keep listening and you’ll hear the bones go crunch!

The sort of things that I am going to eat
Have fingers, toe-nails, arms and legs and feet!

The Enormous Crocodile is the book’s main character. He’s the embodiment of absolute evil. A bad guy, without a shadow of a doubt. He’s sneaky and smart. Cruel and crafty. He has no problem telling a lie. He has one goal in mind—catching a child for lunch. And one may not suffice: by the end of the book he’s so hungry he wants six whole children! To that end, the Crocodile comes up with “secret plans and clever tricks”: he turns into a swing on a children’s playground, into a bench on a field for picnics, into a coconut tree in a forest. Each time, he just about does it but...

Of course, the crocodile never once gets his child snack. Why? Because one can and should fight against absolute evil. Roald Dahl, that jokester and iconoclast, came up with the perfect children’s story. That’s right—the one where good always prevails over evil, after which evil gets its just deserts and good triumphs.

And yet Dahl’s story is not as simple as it looks at first sight. Who is it that embodies good? The kids themselves are passive. The crocodile hunts them down but his plan is thwarted at the last second by the crocodile’s own acquaintances: the elephant, the monkey, the bird, and the hippopotamus. It seems simple: the children’s protectors are the “good adults” who won’t let a bad adult carry out his criminal scheme.

But it wouldn’t be Dahl if he left it at this basic moral-didactic level. Just look at what these good adults are called. Humpy-Rumpy the Hippopotamus. Muggle-Wump the Monkey. The Roly-Poly Bird. Trunky the Elephant. These names mean to say something and they are all somehow strange. Slightly askew. Tongue-in-cheek.

The Enormous Crocodile, by the way, is rather talented. He writes poems. He is an excellent actor who knows how to disguise himself. He’s even charming in his own way. Dahl describes the rumbling in the Crocodile’s stomach, how he gets upset and complains that he needs to eat. Crocodiles aren’t vegetarians after all, they need meat! At a certain point, the child reading the book will start to feel bad for the crocodile, who just can’t seem to get his lunch. Even as she understands and accepts the author’s moral framework (the crocodile is bad, the other animals and children are good), she sees these characters from different perspectives. It turns out evil can be charming and attractive. The good guys can be weak and even quite silly.

There’s a lot of laughter in The Enormous Crocodile. It’s in the plot, the play on words, and in the excellent illustrations by Quentin Blake, Dahl’s faithful illustrator.
Roald Dahl uses simple, everyday words. “Oh, you wicked beastly beast!” the Elephant scolds. “Oh, you foul and filthy fiend! I hope you get squashed and squished and squizzled and boiled up into crocodile stew!”  Some adults think such “rude” language is unacceptable in children’s literature, that it’s bad for children. That is, of course, not true. If there’s anything that affects a child’s speech, it’s the words he hears from adults around him. Books have nothing to do with it. To the contrary, these silly, rude, simple words are what help the good guys finally defeat the crocodile. They are a foil for the crocodile’s rude behavior. Just ask yourself: would the ending be as effective had Roald Dahl chosen other words?

Trunky wraps his trunk around the Crocodile’s tail and starts to swing him. Soon he is a blurry circle spinning around the elephant’s head, then a green rocket, and finally he’s flying into space, until...

The scary, scheming, cruel Crocodile sizzles like a regular sausage. The children at the edge of their seats, worried first for the hungry Crocodile and then his potential victims, can laugh and breathe a big sigh of relief. It’s all over. Evil has been defeated with the elephant’s might and fitting words.