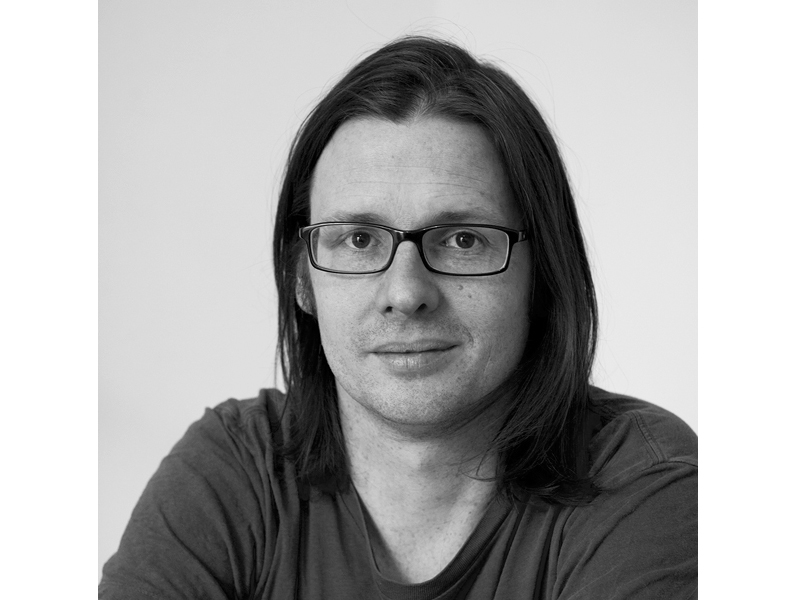 Tom Gauld is a Scottish illustrator and comic strip author. His graphic novels Goliath Most recent English edition: Drawn & Quarterly, 2017. ISBN 9781770462991.  and Mooncop Most recent English edition: Drawn & Quarterly, 2016. ISBN 9781770462540.  and his collection of short comics for The Guardian, You’re All Just Jealous of My Jetpack Most recent English edition: Drawn & Quarterly, 2014. ISBN 9781770461048. , came out in Russia in 2016. His pictures and short comics are laconic and precise. But they are most surprising in their silence, full of hundreds of possible meanings. At his workshop at Moscow’s 2016 International Non/fiction Book Fair, Gauld showed how several simple lines could express a character’s personality and convey emotion. In his interview for Papmambook below, he told us about the particular language of a graphic novel, unusual comic book characters, and about caricature as parody. 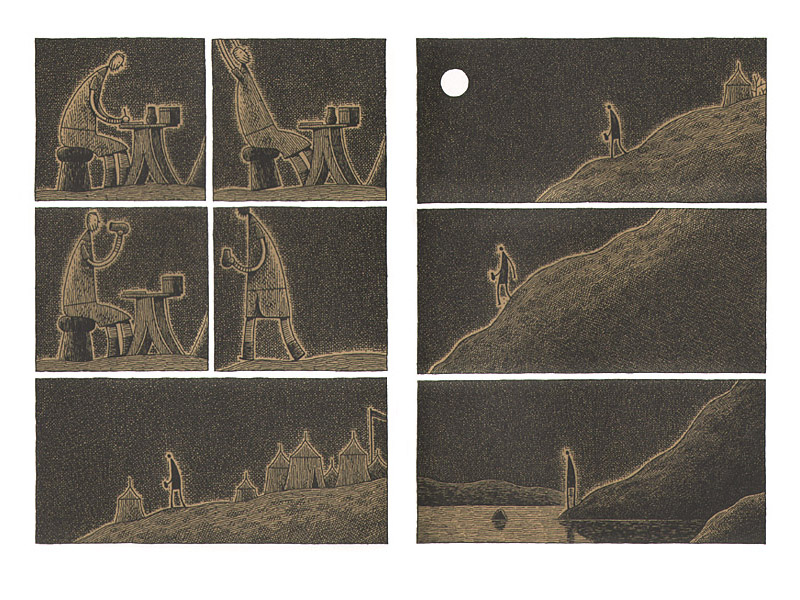 - For a long time, comics were considered a genre intended purely for entertainment. How are comics and graphic novels seen in Great Britain today? Are they a part of the school curriculum?

- The relationship to comics and graphic novels in Great Britain has changed quite a bit over the last ten years. Comics are no longer seen as entertainment only and they are treated much more seriously. I can’t say if they form a part of the school curriculum, but they are certainly available in school libraries.

- Do you think one has to learn to read graphic novels?

- Yes, reading graphic novels requires particular skills. I often encounter adults that cannot understand graphic novels at all. They are not able to perceive the comics as a whole because they differentiate between the text and the illustrations, so they miss the nuance of the graphic story and are not able to understand the particular language of the comic. Children are much better at reading comics—they take in the picture and text at the same time, since they often read illustrated books and are more attentive to the pictures. Children more often perceive the world through pictures than adults. I think all you need to do to learn to read comics—is to read comics. The more you read them, the better you’ll be at it.

- Victor Melamed, the Russian translator for your novels Goliath and Mooncop, noted in his afterword that your style is reminiscent of the Japanese haiku.

- I’m no expert on Japanese poetry but I understand what Victor Melamed meant to say. In my work, I try to convey the characters’ thoughts and feelings without naming them directly and without giving the reader any of my own judgments. Mooncop never says he’s lonely, and Goliath never says the world around him is unfair but as we leaf through the pages, we sense that. I do try to use as few details as possible to capture the feelings of my characters. I think this approach brings readers closer to the hero. In comics, the most interesting part happens “between the lines,” in the space between pictures. The reader is left alone with the characters, without any hints from the author, and tries to understand what the characters experience when the author is silent. In that moment the reader puts himself in character’s shoes, lives out a part of his life and experiences what he does. What’s important is that the space between pictures not be so big that the reader loses track of the narrative.

- Most people would probably say the main characters of Goliath and Mooncop are sort of underdogs. Why did you choose to tell their story?

- I find it much more interesting to tell stories about regular people with flaws than about perfect superheroes. I think readers, too, like characters that are somehow like them. In stories about ordinary characters that don’t have any superpowers, the reader finds it easier to recognize himself, remember and relive those feelings that every one of us feels. Such heroes are easier to relate to, because we understand their feelings and actions.

- Your main characters are rather private people. They don’t seek to tell the world about themselves. After his service, Goliath looks out over a desert plain. Mooncop looks down on Planet Earth and tells himself not to be sad. Do you think a person needs inner concentration, that we are too eager to tell everyone all about ourselves on social networks?

- I do think so. Sometimes we need to look inward, sort out our thoughts and feelings. When I draw comics, I need silence and inner concentration. Clearly, that mood gets transmitted to the heroes, because my comics are also “quiet” and concentrated.

- In You’re Just Jealous of My Jetpack, your collection of short comics, there are lots of literary parodies, caricatures of various literary works. In one of them, a mouse dies of hunger while reading James Joyce’s notoriously long and difficult novel Ulysses. Were you able to finish reading Ulysses?

- No, I never even started.

- Do you make fun of your favorite works or those you don’t like as well?

- I like to joke about what is near and interesting to me. I don’t like mean, unpleasant humor. In my comics, I make fun of authors and readers just a little bit, but try to do so without offending anybody. If there’s a particular literary work I don’t like, I simply try not to speak of it.

- Are you worried about jokes about, and parodies of, your own works?

- Not at all, if they’re not offensive.