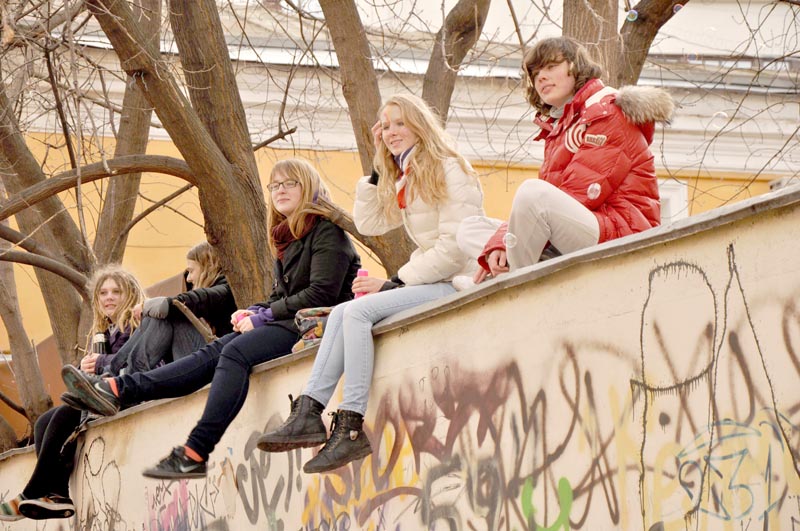 British contemporary writer Melvin Burgess is known as a “cool” author who writes for young adults and doesn’t shrink away from controversy. For example, there’s his novel in which a teenage girl turns into a dog and, in a sort of double metaphor, goes through everything dogs—and teenagers—do. Burgess, according to critics, writes about “sex, violence, and drugs” without a backwards thought. At an event with Russian readers, he said that it was not up to writers to hand out moral judgments about “good” or “bad,” but rather to teach understanding. Today, the challenge is to understand, not judge.

Melvin Burgess’s first novel, The Cry of the Wolf, was published in 1990. In 1996, his novel Junk won the Guardian’s literary award and a Carnegie Medal, and placed among the top ten winners of the prize. The bestselling Doing It was an LA Times Book Prize Finalist in young adult fiction. Melvin Burgess’s works have been adapted for theatre and film. The novels Junk, Doing It and Lady: My Life as a Bitch have come out in Russian.

- Melvin, do you remember being read to as a child?

- Yes, I remember it well. I was read to every night. My parents had two “sets” of kids—my older brother and I and then two younger children that were born much later. My parents were worried that we older children would feel like orphans, that we weren’t getting enough attention. So they made an extra effort to devote time to us and read to us every evening. And they read to us when we were younger too. I remember being read to at three by my dad. He was a teacher. He developed curricula for schools and was crazy about books.

My mother would tell me stories. She had a great memory and knew a lot by heart. So as a child both reading and storytelling were a big part of my life.

- When did you become an independent reader?

I started reading at school. I don’t remember being taught to read. I think I taught myself and I learned quickly.

- What were your favorite children’s stories?

When I was little, I loved to read about animals. I loved anything by Gerald Durrell, especially A Zoo in My Luggage. I thought it was unbelievably great—to travel the world visiting zoos and describing them. But the first book I truly fell in love with was The Wind in the Willows by Kenneth Grahame. First, my parents read me the book. Later, when I learned to read, I read it myself. Then I brought it to school and the teacher read it aloud to the class. It felt like I’d shared my treasure with those around me. I loved that book so much that my parents had to draw the god Pan for me, because at one point he appears in the book. That picture of Pan hung on the wall in my room.

- Here in Russia, Alice in Wonderland and Winnie-the-Pooh enjoyed massive popularity. Were these books among your favorites?

- Winnie-the-Pooh was read to me. But I preferred A.A. Milne’s poetry. My mother loved poetry and I can recall many lines of poetry from that time. Milne’s poems have a very interesting rhythm and unusual rhymes. You can play with them for hours, turning them over in your mind. As children, we even called our cat Pinkle, after the cat in one of Milne’s poems. Is Milne’s poetry popular in Russia?

- Of course, my parents read Alice to me. We had both Carroll books at home—Alice’s Adventures in Wonderland and Through the Looking-Glass. But I didn’t really like them. To be honest, I don’t think they are actually children’s books. I was also rather indifferent to Winnie-the-Pooh. As I’ve said, I absolutely loved Kenneth Grahame. Then, as a teen, I got into Sherlock Holmes and fantasy. I adored Mervyn Peake: he has a beautiful, intricate language with long, interestingly built sentences. No dragons—just people. People in strange circumstances but people nonetheless. I liked to read about their relationships. I also loved Kurt Vonnegut. Science fiction in general. That was my dad’s doing—he too loved science fiction and often brought me books. There was a publisher that put out collections of science fiction—they were these horror stories and I read hundreds of them. They described real life situations very precisely. I also read many ancient myths.

- How about realistic literature about human relationships?

- I don't think there was any. I mean, there was something, of course. Some stories about children with a dog. They were out to catch smugglers. They were by a popular author—her books were all over bookstores. The language was simple: subject, predicate, object. And the characters, as I now understand, were fiction stereotypes. But every one of her books had these hooks that just drew children in. And I fell for it.

- What about Dickens? As realistic literature?

- No, when I was little, I didn’t read Dickens. He has very difficult language.

- All these books—fantasy, science fiction—they satisfied your interest as a reader, as a teenager. Why did you then decide that today’s teenagers need more, that they need a different, realistic literature?

- When I graduated from school, my parents and I moved to another city. There was a lot of music, politics, drugs. In that same period, I discovered Carl Jung, his theory of archetypes and the unconscious. It took me a while to understand that I didn’t want to write science fiction. I want to write about reality, and that requires a different language, a different style. Books should help us understand the world around us, as myths did. Myths helped people understand events, to make sense of them. If you write a good book, you create a modern myth, you teach understanding.

- So your books should help a teenager navigate the modern world. But you don’t agree that this world should be labeled as “good” or “bad”—even when it comes to drugs. What about authorities then? As I understood, your dad was an authority for you, including when it came to choosing books. Would you say parents are an authority for today’s teenager?

- A lot has changed in today’s world. I think we should draw a distinction between authority and authoritarianism. Authoritarianism can’t be a principle of teaching in this day and age. I say “this is good” and then that’s how it is. Today everything is much more complicated than that. The world is multicultural, multi-ethnic. It is full of different ideas, different ways to see things. We can no longer say categorically: “This is good, and that’s bad.” It all depends on our perspective. You should teach a child to understand that everything is quite complicated. If you don’t teach him understanding, he cannot become an independent person.

- You think books that present a complex view of the world can teach understanding. Do today’s parents think so too? After all, they’re the ones that buy their children books—including yours.

- Yes, of course, children don’t have money and their parents buy them books. And mine are among them. But those aren’t the parents that only know two words—“good” and “bad.” They’re parents who read.

When Junk, my book about young people who got involved with drug addicts, had just come out, there was a whole campaign against it. Many thought that the only thing you could say in regards to drug addicts and the topic of drugs in general was just one word: “no!” They simply hated my book.

But there were others who welcomed it. Among them were a great many young people and educators, as well people who have worked in rehabilitation centers. They said that Junk is the first book they could use in their work because it described real, recognizable people. Maybe the decisions those people make are not the best. But we can discuss them, and treat them with compassion.

Most important to me was that teenagers see themselves in my books.

There were two things Melvin said at a reader event in Russia that I found baffling.

The first was the following: when he was beginning his career as a writer, Melvin Burgess assessed the current book market and found that there were no realistic books for teenagers.

The second was this—he considers the description of sex, drugs, and violence in his books to be a virtue because that is what is most interesting to teenagers.

It’s only now that I’ve finally understood what Melvin wanted to say. Of course, it wasn’t that there was no realistic literature whatsoever. Melvin meant that, on Britain’s book market thirty years ago, there were no books about modern teenagers and their issues. Naturally, each generation has its own issues.

Incidentally, “sex, violence, and drugs” are nothing new in literature.

For Russian nobles at the time of Nicholas II, duels were a vital topic. The duel was awful as a means of conflict resolution. And so the government banned them. But the issue was complicated by the fact that, for nobles, participation in a duel was part of the unspoken code of honor (likely stemming from the tradition of knights’ single combat) and an act of protest. This theme—one of ritualized killing—seeped into the best literature of its time. We see it in the works of Pushkin, Lermontov, Tolstoy, Turgenev, and Chekhov.

Violence was one of the key themes for Dostoevsky, too. Tolstoy and Kuprin addressed the sexual issues of their time. Bulgakov wrote the novel Morphine.

So to read or not to read?

Naturally, these themes evolve over time and the problems take on new forms. But should we simplify or censor them?

One generation or another will accept a book only when people see themselves in it. Then it works. The book becomes a favorite if its author is honest with the reader. As psychotherapists working with addiction have taught us—it’s hardest to name your condition and admit to yourself that you have it. Otherwise, treatment is impossible.

Among a writer’s challenges is to do that work for us and do it well. And that’s the catch. Here, it’s not just about Melvin Burgess, but us as well.

Translated from the Russian by Alisa Cherkasova
Originally published in 2012