If six months ago someone had told me a little book about a pooping mole would be a favorite in our home, I wouldn’t have believed it. I did not intend to buy Wolf Erlbruch’s and Werner Holzwarth’s The Story of the Little Mole Who Went in Search of Whodunit US edition: Abrams Image, 2007.  (published in the UK under the title of The Story of the Little Mole Who Knew it Was None of His Business By Pavilion Books. ) at all, ignoring its mention in articles and reviews. There are so many great children’s books in this world and I wasn’t about to waste precious time on a mole and some poo.

But at three, little Leonid headed off to daycare and a couple weeks later brought back exactly four bad words: peepee, butt, poo, and fart. Of course, he had known these words before but at first he had only used them literally. It was in daycare that he suddenly understood that these simple words could excite an unusual reaction from adults: they would get offended, scold, turn away. He understood that you could use these words to tease, provoke, or get back at someone.

I let Leonid know that I did not enjoy hearing those words and explained that they were “potty words” that live in the bathroom. A few times, he’d shut himself in the bathroom and shout his four beloved words for all the world to hear. I waited it out and a few weeks later Leonid emerged unscathed from this particular developmental stage.

And then, six months later, the “potty words” reared their heads again. This time they came from Platon, who had just turned three himself. My sons’ personalities are very different. The method that worked for obedient, trusting Lenoid, was utterly useless for creative and stubborn Platon. No matter what I did—whether it was expressing my disapproval or refusing to play with him—he used those words. I offered alternatives: “How about hand-foot instead of poop-butt?” Tosha just laughed and agreed to no compromises. “Sorry, Mom, I won’t anymore!”, he’d say, then repeat it all again in fifteen minutes. I spoke with psychologists who all suggested I ignore it—he’ll stop soon enough, they said. But it was impossible to ignore when the kid, talking a walk outside, would run and jump and play, and then scream out in delight: “Poooooooooooopy!” I would blush, turn pale, and suffer the accusatory glances of passers-by.

Back at home, Platon and Leonid withdraw to their little house under the bed. They ask me not to come in and quietly whisper their four hallowed words. My husband assures me all boys love those words—it’s just that not all moms know they use them. And that I shouldn’t get involved… So I was just about ready to step back and acknowledge my defeat at this point in their upbringing.

That’s when I remembered the mole someone pooped on and decided to fight fire with fire. I ordered the book online and told the kids that soon we’d get a “book about poo.” Every day, first thing in the morning, Platon would ask if the book was here yet. When it finally arrived, the kids were totally thrilled. We read it three times and they laughed and laughed and couldn’t quite believe it. You can write a real book about poop? You can draw poop? And mom, who never wanted to hear that word again, can’t stop saying it? Outside the bathroom, too! 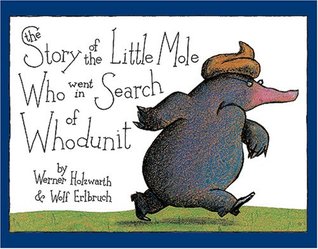 The book is never far from Platon’s mind. He’s learned it by heart. We usually read in the evenings before bed and quite often, having finished a “regular” book with fairy tales, stories, or poems, Platon will ask: now can we read about the poops? And we read the story about the mole over and over.

This book “legalized” a forbidden subject for both boys. To my amazement, I noticed that Platon stopped misusing the word “poop” and started using it a lot less outside the bathroom. Clearly, the book helped him let off some steam, allowing him to say the word with permission and gradually obviating its use in inappropriate contexts.

Maybe most importantly the book about the mole allowed me to come to terms with the fact that in the brotherly-boyish world of my sons there are some things I just don’t get.