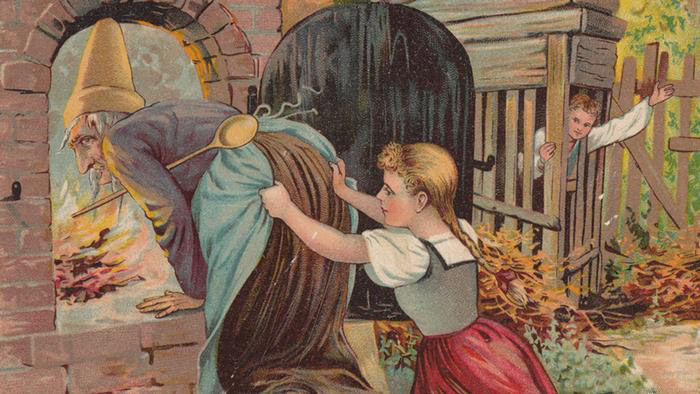 I wrote an essay about “scary things” in literature, in defense, one might say, of the scary. That is, both adults and children need scary stories since “socialization demands that we absorb a sort of ‘pantheon of fears’ along with cultural restrictions.” So, should we scare children then? The scarier the better? Of course not.
The ability to take in what’s scary, including material that’s enveloped in literary form, is tied to the particularities of an individual’s age and psychology. At different ages we experience fear differently. And we get scared in our own ways. 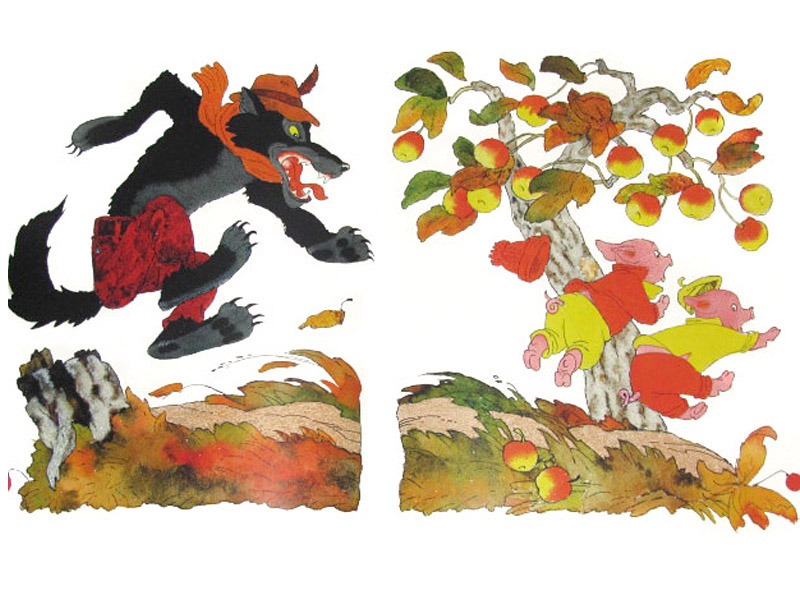 As I’ve said, we learn to be afraid. In particular, we learn to fear what we ourselves imagine. In fact, our ability to experience fear is tied to the development of our imagination, another key psychological function.

A one-year-old child can be startled by a loud noise or sudden movement. But he can’t get scared of Baba Yaga, a vampire, or an evil wizard—simply because wizards and vampires are outside of his perception for now. He doesn’t yet “understand” transformations and magic.

Children learn to fantasize by age four or five, and their imaginations differ in scope. This vital psychological function, which is the basis of complex learning processes, is tied first and foremost to an ability to imagine the missing “here and now,” imagine what is outside our field of vision. It’s easiest to find traces of the developing imagination in a child’s games or drawings.

For example, a child starts to pretend that a stick is a spoon, or that a block is a little car. Psychologists call this “object substitution.” When a child doesn’t have a real spoon or toy car at hand, he can compensate with the help of other items, endowing them with the necessary qualities. He plays with the block or stick as though they were the real items intended for that purpose, imagining those items that he doesn’t have. This ability then develops into a capacity for imagining entire scenarios—so-called “imaginary situations“ that take place entirely in the child’s fantasy. In Mira Lobe’s The Grandma in the Apple Tree, a boy speaks with a non-existent grandmother, imagining various adventures. This is how imaginary situations are created—this is the work done by imagination.

The same occurs in children’s drawings. The child usually builds entire scenarios in her mind—ones that don’t so much reflect reality as a child’s interpretation of events. To fill out the picture, children will often include those elements they think are “missing.”

A budding imagination presents another interesting symptom. When asked “Who did this?” a child might answer “Not me!” and offer an alternative culprit. He’s starting to understand the “art of lying,” which requires one to think up imaginary situations.

In other words, imagination allows one to imagine what is outside of the visible, to interact with this invisible world and even manipulate it. That is precisely why imagination lies at the basis of our ability to create art and to believe in higher powers.

I will reiterate that it doesn’t happen all at once—it develops gradually.

A two-year-old is more likely to turn down a story about a witch because he’s bored, not scared. And while a two-year-old may be entranced by the rhythm and rhyme of “The Stolen Sun” Rhymed fairytale by Russian writer Korney Chukovsky.  and hypnotized by the cadences of the adult that’s reading, he won’t yet experience the tragic import of the story, which is about the onset of total darkness. That he will discover, along with the accompanying fear, a bit later at age three, when he has learned to speak well and play more complex games with toys.

At three, “Little Red Riding Hood” and “The Three Little Pigs” might be scary. Particularly frightening is the idea of being eaten. This fairytale trope is one of the first themes that a child perceives as scary, likely because the child’s imagination can rely on her own experience.

Yet at three, a child doesn’t yet have the imagination to see many violent episodes as frightening—including those involving the cruel killing of witches, as in the Grimm stories or Afanasyev tales. “They tied the witch to a horse’s tail and let it loose in an open field.” Okay, they tied her? So what? The imagination has nothing to latch on to to grasp the sense of this execution; or to make sense of what an execution is at all.

Here, it seems, another law of perception will come into play. By age four, and certainly by five, when a child is truly afraid of witches and cannibals (and believes in Santa Claus), imagination blossoms, but is still poorly controlled. The rational foundation in a child is still very shaky at that age. Rationality will develop in the next age group, when children stop believing in Santa Claus, and see his visits as a fun game.

Meanwhile, from four to six, the child constantly “trains” and strengthens her imagination, which is the basis for learning and complex thought. Now children start to think about death, fear darkness, experience a wide variety of fears. A recurrence of old fears and even the arrival of new ones around age five are, like the ability to lie, the price of the imagination’s rapid development.

In this period of intense development of the imagination, it’s likely a child won’t experience any compassion for the witch or cannibal in the story—no matter what happens to them, no matter the gruesome fate they face to ensure a “happy” ending. A child is too afraid and so is relieved to see them destroyed. In other words, he doesn’t see anything human in these characters. In a sense, the destruction of the “bad guys” is an example of the psychotherapeutic suggestion to “draw your fear and tear up the sheet.”

But we have an issue here. It’s usually an adult who reads to a four- or even five-year-old. The adult has already outgrown certain medieval fears and is also weighted by historical knowledge. He can’t be naive about—or satisfied with the justice of—executions and torture. He shudders reading about the witch tied to a horse’s tail or about how she is forced to dance in red-hot iron shoes or has her eyes poked out. The adult doesn’t see the text as a metaphor for the destruction of evil, its elimination—but rather views these events with a degree of realism.

I suppose we should be glad about it—celebrate our growing compassion as a society, our more civilized nature. But if an adult feels uncomfortable reading such episode, a child will usually pick up on his feelings. Adults’ feelings are rather contagious, they’re airborne, transferred quite literally through the breath. That’s when a child can get truly scared: there’s nothing more frightening than the fear of a parent or other trusted adult.

So we have a rule: if a “children’s” text elicits disgust or aversion, you can’t read it to a child, even if it’s a classic. Let someone else read it. Or set it aside altogether. If the child majors in English, he’ll read that stories or others like it with fresh, receptive eyes.

Even so, a child needs scary stories. Children often say “Tell me a scary story. I want to get scared.” Why? Their imaginations need a workout, just like memory and thought. But in stories we’re dealing with an imagined fear, with predictable boundaries that are laid out in advance. A kindergartener has experience with role-playing games and the creation of imaginary situations and he knows that games are pretend. This in turn means that the situation is under control, that one can destroy it any point, jump out of it at any moment.

Interacting with an imagined fear is a sort of emotional training which invites a wide range of emotions of various intensity and duration and allows one to learn to control those emotions. Psychologists consider both imagination and the ability to control emotions major achievements for kindergarten-age children and necessary bases for further development.

At the same time we each have our own threshold of fear.

A mother once asked me for advice. Her child always asked her to read scary stories and refused to listen to them if no one was eaten up. What could she do?

Another mother was facing the opposite problem: her child couldn’t bear scary episodes in books. She refused to listen to The Wizard of Emerald City A novel by Russian writer Alexandr Volkov based on L. Frank Baum's The Wonderful Wizard of Oz.  once they got to the part about the cannibal. Michael Ende’s The Never-Ending Story ended for them when the hero’s horse drowned in the swamp, punctuated by a burst of tears and a refusal to read any further. What could be done?

Of course, if a child is obsessed with cannibalism, not all is well. It may be symptomatic of an excess of aggression. If a child cannot handle any amount of fictional tragedy, his psyche is worn thin. In both cases, it is worth seeking psychological help. It is especially common for gifted children to need extra support, since they expend their creative energies more intensely.

These two scenarios establish a sort of spectrum for the perception of the “feared.” Though fear develops in accordance with age, it still relies heavily on individual experience. Each of us deals with the “disappearance” of close people and beings in our own way. And these disappearances inflict different degrees of trauma—for a time or forever, in a time of sickness or bad mood. Each of us has our own way of wishing and experiencing frustration when those wishes don’t come true. We each have our favorite toys and activities. We each draw our own picture-scenarios. In other words, our souls have little individual hooks, bent into their individual shapes by our experiences, to catch what we read.

If a child is drawn to stories about cannibalism, read them to him: clearly it is helping him to sort through some issue. (Though it is of course not enough to simply read for the issue to resolve itself.)
If a child is afraid of the unpleasant events in the story, you shouldn’t force it. It could be the final, destructive, straw, for a frail psyche.

That’s why we choose such different books for reading. And why children make such different choices. And why we all have take different positions on the scary parts in books.
There are no “objectively scary” books. Are fears are always subjective. And when we choose a book for a child, we should first and foremost address his individual needs.