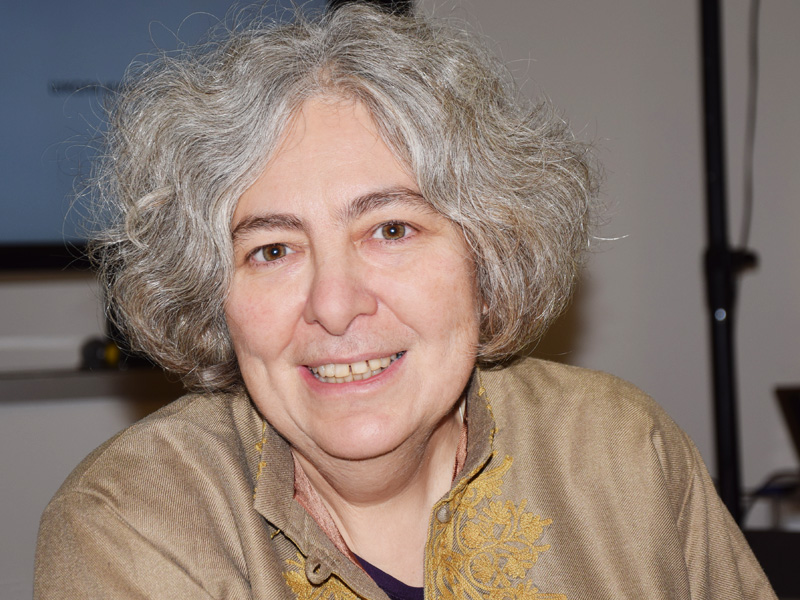 Books for boys and books for girls—is there a significant difference? How did a division of literature on the basis of gender emerge? Has anything changed in terms of a gendered approach to books recently and why?

To answer these questions, a Papmambook correspondent sat down with Olga Bukhina, a translator, essayist, and expert in children’s literature.

- In the last several years, many young adult books with a female protagonist have come out. Are we witnessing a surge of so-called “gendered” literature?

I would say so. For example, in three different countries—Great Britain, France, and the U.S.—three books were written practically at the same time (I actually checked), where the main characters are very similar girls. These books were The Evolution of Calpurnia Tate by Jacqueline Kelly, which I translated [into Russian], The Lie Tree by Frances Hardinge, and Miss Charity by Marie-Aude Murail. When you read these books, you get the sense that they are all about the same girl. But of course the authors did not somehow conspire with each other.

- Is there a similar trend in our own literature?

- As always with Russian-language literature, we seriously lag behind in these developments. The image of a “strong girl” as a protagonist in children’s and young adult literature first emerged and developed in fantasy novels. One of those girls was Lyra, the main character in Philip Pullman’s books. She often ends up in situations where the fate of the world is in her hands and, instead of relying on anyone else for help, she chooses to act on her own. Then there were fantasy novels about girls who were a bit older. Examples would include Suzanne Collins’s The Hunger Games and Veronica Roth’s trilogy, which began with Divergent. In our own literature, it would be Alexey Oleynikov’s books about Jenny Dalfin. The literary figures of their heroines, Katniss, Tris and Jenny, are very similar, and they develop in similar circumstances. What’s interesting is that all these books were written practically at the same time. Then fantasy pulled the rest of literature along with it.

- Has the representation of a girl-heroine changed in the last hundred years?

- The girl-heroine has changed in the last hundred years just the same way as the rest of the world has. The Evolution of Calpurnia Tate depicts in great detail what a girl was supposed to be doing in the late 19th and early 20th century. She was supposed to help her mother with the household. At that time, city girls had only just been allowed to attend school and village girls did not study anything at all. That was, of course, reflected in literature. A girl was dependent and in order to act she needed a helper. In fairy tales it could be a magical character, but in realistic literature it was often a kind uncle or other relative. Their dependent status was particularly apparent in adventure novels, where there were practically no girl-heroines. Until fantasy emerged as a genre, all adventures were for boys.

- What about Irmgard Keun’s book The Bad Example?

- That was a definite exception from the overall trend—there were always exceptions in literature.

- And how about Pippi Longstocking?

- Pippi is another story—after all, she’s not quite a girl. She’s more of a symbol, like Peter Pan. Pippi is a symbol of freedom. She doesn’t have a particular age and her age doesn’t actually matter. What stands out is that she has two friends, a boy and a girl, and she is equally friendly with them both. The children, who are the protagonists, will grow up, and Pippi will make new friends—girls and boys just like them. Although we can of course observe a very interesting trend in the change of the symbol itself, from a boy-symbol—Peter Pan, to a girl-symbol—Pippi.

The beginning of the Second World War, however, marks a completely different story. Sadly, women began to join the war not just as Sisters of Mercy [nurses], but also as soldiers. A need emerged for a strong, active woman and women suddenly had an opportunity to act. This was a dual process: a woman’s desire to self-realize outside of the confines of the household coincided with a societal need for this self-realization. It became very important for a woman to recognize what she was made of, who she really was.

- Is that the same inner process described in E. L. Konigsburg’s From the Mixed-Up Files of Mrs. Basil E. Frankweiler?

- Yes. That’s one of my favorite books in which a girl protagonist becomes a leader. She is the one who decides to run away from home, who finds somewhere to hide. She takes her brother along as travel companion only out of financial considerations. Besides, it’s nice to have company—it’s lonely on your own. But it’s significant that it was she who wanted to be outside the house, to feel free. Actually, that’s the entire history of humanity—the desire for freedom. It’s just that women weren’t allowed to think of it until much later.

- I think the meditative nature of modern girl-heroines is reminiscent of various [autobiographical works on] childhoods in Russian classic literature. Could we say that the girl-heroine is developing just like the boy-hero within literature, just with a delay in two hundred years?

- I don’t think so. Even before Leo Tolstoy, there was a good amount of female writers who wrote about their childhoods—it’s just that we don’t know them. Take Lidia Charskaya, for instance—she was Leo Tolstoy’s contemporary. Two hundred years ago, a writer would choose a boy to be the hero of an adventure novel. In works of that time, a girl-heroine would have to change into a boy’s clothing in order to take action. The only space where women were allowed to change into men’s clothing was literature. What girl-heroines were allowed to do in literature, no girl could possibly do in real life because of a multitude of restrictions, which girls would be punished for violating. And that’s a key point. In that sense, literary heroines significantly outpaced their real-life peers.

- In books about girls, the heroines often have a female rival, a sort of anti-hero. How would you explain that?

- That’s right, books about girls often have this female rival—sometimes she’s much older than the heroine. Sometimes the mother becomes the rival, as in Jacqueline Kelly’s The Evolution of Calpurnia Tate. It’s the mother that tries to keep Calpurnia from science, and who doesn’t share her interests. But there are books about girls where there is no rival. A good example would be The Secret Garden by Frances Hodgson Burnett, where the heroine doesn’t have any real rival—it’s only life that gets in the way of her work in the garden.

- Why do you think we need a division of literature into books for girls and books for boys at all?

- This division is actually unnecessary, but there are things that have come about historically and are difficult to move away from. First of all, it’s easier to sell books this way. Parents are partly to blame for this, since they often request a book for a girl or a boy when they come into a bookstore. But this division is rather arbitrary. There are girls who love to read books about boys and a boys who enjoy books with a girl-heroine—it’s just hard for them to admit it. Second, in a society that loves to sort people into categories, this distinction is accepted and considered possible. Now I’m going to contradict myself. I think girls must absolutely read books about girls because in this way it’s easier for the reader to relate to the heroine, to understand her struggles, to identify with her, and, accordingly, much easier to understand herself.

- So interest in a book depends not so much on whether the reader is a boy or a girl, but on his personal needs and interests?

- Yes. When my grandmother was eighty, she loved reading the biographies of actors. She was very interested in the theater. Maybe I haven’t grown up yet, but books like that don’t much interest me. When I was little, I liked books about animals. I still enjoy them now, but not as I did in childhood. About twenty years ago I was an avid reader of fantasy novels, but for the next twenty years I didn’t even pick one up, and just now I’m starting to get into it again. That’s not what matters—what matters is that literature now has characters showing up that weren’t there before. And it’s not an artificial process, otherwise it would be uninteresting. Nobody sits and thinks, who should I write about that isn’t yet represented in literature? It’s just that society develops an interest in people that are different from others.

- When were books first separated into those for girls and those for boys?

- Books with girl heroines appeared at the beginning of the 20th century and there were a great many of them. In my view, they were rather boring, because the girl-heroine often didn’t have anything to do. As a rule, she got sick, then she was treated, pitied, but she died because she didn’t have a future. Then books like that disappeared [in Russia]. I’ll give my personal opinion on why that happened—I think it was purely political. After the 1917 revolution, the Soviet powers decided to ban all old books and, for some reason, banned all books about girls. The adventure novels with boy heroes remained but they were all books in translation: Alexandre Dumas, Jules Verne. It probably happened this way because the new regime needed grand revolutionary stories, and books about girls seemed bourgeois. After the revolution, girls wanted to walk around in leather jackets, with revolvers, that is, to be not just boys, but “super boys.” Now that period has passed for writers, but not for readers. Readers often lag behind a bit, since children often read what their parents, grandparents, book publishers and booksellers read when they were kids. But now, slowly, the protagonists of literature are changing. It’s not just girls emerging as heroines in literature, but strong girls, and these works are timely and relevant.