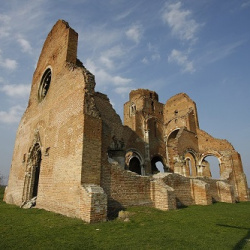 When you can’t quite fit in with a new group, someone might say: “You’re not inside the group. You’re outside.” Sure, you could get closer to the crowd, squeeze in with everyone so your parents think: he gets along with kids in a new place, all’s well. But where you are in the crowd doesn’t actually make much of a difference. It doesn’t guarantee your mind’s here, in the real world.

A boy named Ware, protagonist of Sara Pennypacker’s Here in the Real World [most recent English edition: Balzer & Bray/Harperteen, 2021. ISBN 9780062983817], is a true introvert. Like many people who keep it all bottled up inside, all he needs is a room of his own with a window and a door, preferably one that locks from the inside. A room where he can think and dream. And how he loves doing just that! He goes deep in thought and doesn’t notice or hear anything around him. That can scare and annoy other people, who can’t get through to him and have to yell to try to get his attention. Teachers call him an antisocial child. But he’s not ashamed of that. Not even a bit. Solitude is his best friend.

If you asked Ware whether he’d prefer to be invisible or able to fly, he’d choose the former. Not to spy on anyone, but just to pass unnoticed. So he could take his time and ponder, lost in his own world.

I totally get his need to be alone and do some thinking on your own. I was impressed with how exactly the author described those feelings, almost as if she were writing about me. And my name is a lot like Ware’s—a cool coincidence. [“Ware” is translated as “Var” in Russian; the reviewer’s name is Varvara.]

Ware loves his parents and cares what they think of him. And Ware’s parents in turn worry that he’s antisocial and asocial. They send him to a children’s summer camp. For an introvert, that means a large group of people who could care less about you. Why would you want to come up to someone and introduce yourself? The boy skips the camp’s activities, spending much of his time at an abandoned church. All that’s left there is a pile of trash, broken glass, a mosaic, and the bell from the tower dropped in the baptismal font.

For Ware, that church is a fortress of the Middle Ages, the age of knights. Ware is proud of a report he wrote for school called “Defending Medieval Castles” and follows the knights’ Code of Chivalry:

1. Thou shalt do battle against unfairness wherever faced with it.

2. Thou shalt be always the champion of the Right and Good.

3. Thou shalt always tell the truth.

The main rule is to always fight for Truth and Good against Injustice. Ware lives by this credo in his imaginary world.

The previous summer the church was still whole and Ware watched as people were baptized in water, a sign of rebirth. He thinks that he, too, might have a chance at changing, if he can just plunge into the water of the baptismal font. But taking a dip in the water doesn’t mean you’re instantly reborn on the inside! It’s only with belief in something that the rite makes sense. It’s not just a splash in the pool.

In the ruins of the old church, Ware meets Jolene, who’s growing a garden of papayas to sell. Jolene is no dreamer. She doesn’t believe in Magic Fairness Land and knows from experience that life is tough. Jolene amazes me with how decisive, goal-oriented, and diligent she is. She can also be cold and distant and even kind of rude. Her behavior doesn’t make a lot of sense until we learn more about the circumstances of her family life.

Ware wanted to be what his parents saw as best for him. But it’s a mistake to think he needs to be more social. Ware isn’t like that. Ware and Jolene’s summer friendship transforms them completely. Jolene starts to believe that dreams do come true, and Ware decides who he wants to be, discovers his talent, and becomes more open. To understand Jolene, you don’t need to analyze her thoughts—it’s better to carefully learn about her past. And understanding someone like Ware is about finding a way to connect, no matter how hard that is.