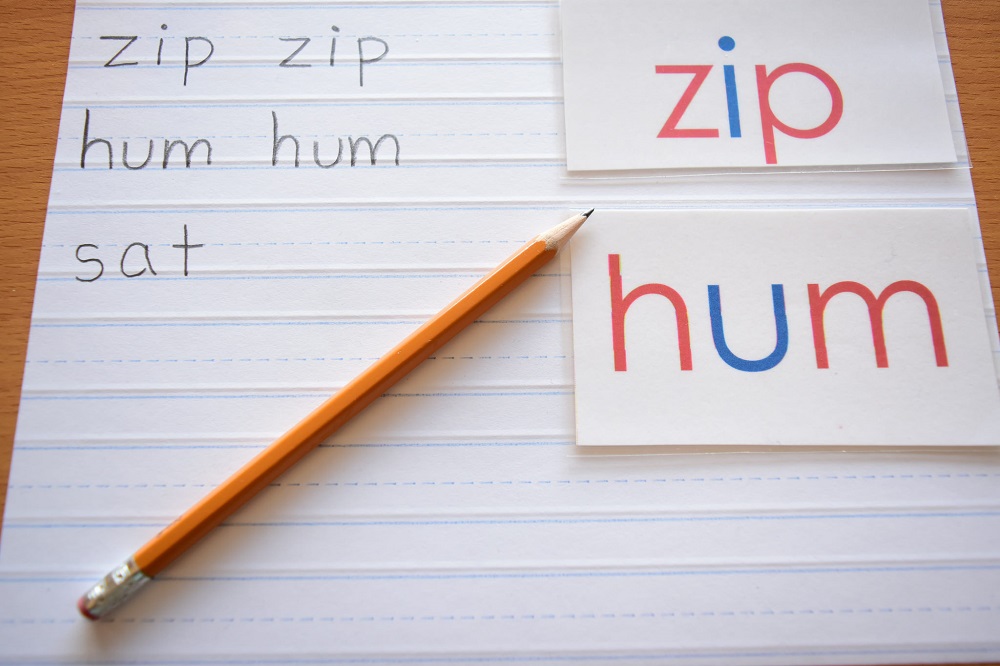 For parents, finding the right early childhood education center means ensuring it will prepare the child for school. The key element of any such preparatory program, in turn, is learning to read. This makes perfect sense: reading is the fundamental skill at the heart of our modern education system. Much of a child’s future academic success depends on how well he can read. Getting into any good school, too, requires that the prospective first-grader be able to read. But no matter how tempting the promises to teach your child to read “quickly and effectively,” it’s best to understand what exactly your child will be doing. We need to ask ourselves what lies behind the advertising of any promising method.

Sensory input as the basis for the Montessori teaching method

What is meant, for example, by the words “We teach reading according to the Montessori method”?

In her book The Discovery of the Child, Maria Montessori wrote of literacy education at her Children’s Houses, which started at about age four. That is, at age four, many of the children under her care could already...write, amazing as that may sound. Write, not read! And they wrote in cursive with calligraphic script.

This is incredibly important. It wasn’t reading that Maria Montessori was teaching the four-year-olds. It was literacy—literacy as a complex of skills, including both reading and writing.

Montessori’s innovative approach to teaching literacy was founded on the understanding that writing would be taught before reading. This approach was the logical conclusion of her overall philosophy and beliefs about education. Maria Montessori believed in a Sensorial approach—that the way to understanding the world around us lay in perceiving it through our senses. The more developed his senses, the greater the volume of information that a child could take in and the more reliable that information was. That’s why the Montessori method emphasizes the development of a child’s sensorial abilities. In particular, it highlights the pedagogical value of receiving information in a sensory manner, such as through touch. After all, a tactile understanding of the world is primary for any child—it’s the way he gathers information from a very young age. And so it is better to hold to this “natural logic” in teaching as well.

What skills can you base on touch? Writing—not reading. (It will take another half century for science to suggest that the eye is also an organ of touch.) The hand is involved in writing. Writing is a very particular touch-based activity with a visible result, and as such, it’s an activity that is relatively understandable to a child. Montessori believed, then, that teaching literacy begins with teaching a child to write.

Montessori developed two learning tools to help children master writing by hand. One was a set of print letters made from sandpaper. These three-dimensional letters were somewhat larger than their worksheet counterparts. The child was supposed to feel them and trace their shapes with her index finger in the direction that she would move her pen or pencil when writing.

Cards from thin plywood or thick cardboard, with the contours of the letters cut inside them, were another teaching tool. By tracing this stencil with a pen or pencil, the child wouldn’t deviate from each letter’s correct form. In repeating this movement, a child could remember it and later easily reproduce it on his own.

In addition to these Movable Alphabets, Montessori presented children with an exercise in filling in geometric shapes on paper. With each stroke, children were also practicing the correct pencil angle for forming letters.

These exercises prepared a child for independent writing. After the children learned to write the letters, they transitioned to copying words and whole sentences, both on paper and on chalkboards. Montessori was proud that the children that learned with her system learned to write well in advance of others their age, even before entering school, and with calligraphic script. Even children with developmental delays were successful with this method. 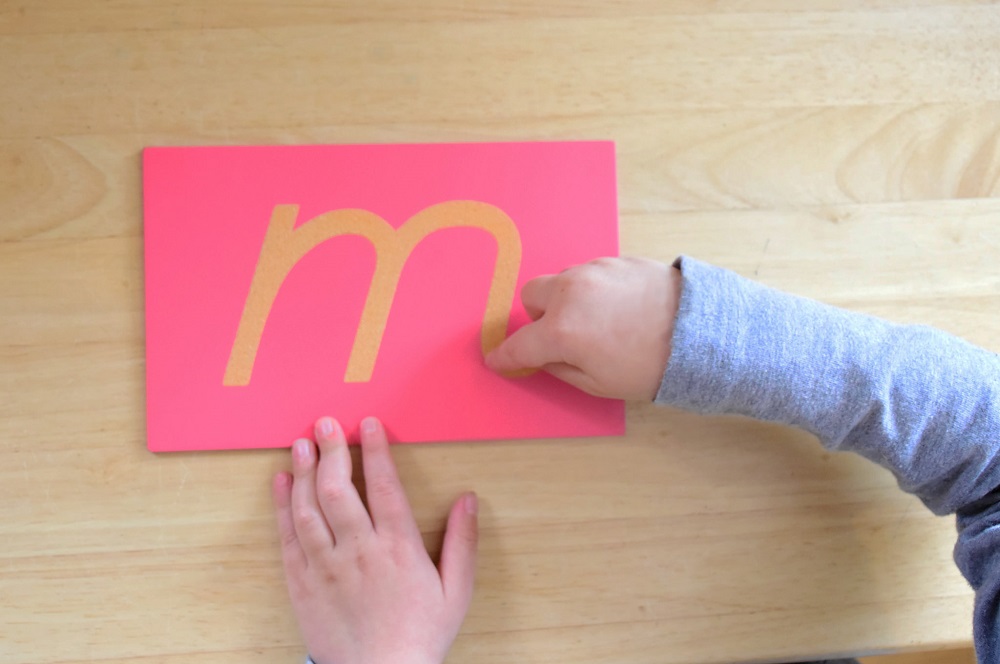 Reading was the next step. Children who knew how to write transitioned to working with sets of words on cards. They memorized and reproduced them—learning to read with a whole-word approach. Montessori also employed a typewriter and some of her little students would type out short, paragraph-long texts.

One hundred and fifty years of the “Mystery Bag”

Maria Montessori’s methods are nearly one hundred and fifty years old. We can safely say she was a brilliant teacher. Some of her inventions and approaches are not only still significant, but are even more relevant in the present day.

When it comes to teaching small children, a tactile approach is still considered important and functional. It allows the child to distinguish between geometric forms and identify certain physical qualities (smooth-rough, warm-cold, dull-sharp, etc.). Touch is a source of information about objects in many “teaching” games. Various items are placed in a bag and the child identifies them by touch alone. One variation on this game uses three-dimensional letters and numbers. You can do without the bag, simply placing cardboard-cutout (or magnetic) letters in front of a child and asking her to find a particular letter by feeling it, or to name the letters in the order they’ve been placed.

Making letters from play dough, arranging them from strings or sticks, or drawing the letters on a child’s palm or back (the child closes his eyes and an adult “draws” the letter with her finger)—these are all tactile games. Montessori herself did not, of course, trace letters on children’s backs (it’s best to leave these sort of activities to parents), but the spirit of her work was the same. In other words, tactile games with letters are very helpful and, as children see them, often fun.

Why you shouldn’t teach a child to write before school

As for teaching a child to write before he sets off for school—even if you apply the Montessori method—I wouldn’t recommend it. The primary reason for this is that writing and drawing are closely related forms of activity and so early instruction in writing blocks a child’s drawing.

Children didn’t draw in Montessori’s preschool. They filled or colored in shapes. Montessori considered any activities based on imagination (including storytelling or reading aloud), an obstacle to development, a way to lead a child away from reality and waste time that would be better spent developing the senses. It’s quite likely that for Montessori’s students, an interest in filling shapes in and graphic copying displaced the opportunity to draw.

Yet for a small child, free, independent drawing is incomparably more significant psychologically than coloring-in exercises. According to Lev Vygostky, children’s drawing is the prototype of written language. It is expression, substantive and emotional—a child’s interpretation of the world around him, brought forth in an accessible, graphic, medium.

Writing should, in theory, displace drawing—precisely as a new stage in the development of speech. Pictographic expression is set aside in favor of a unified symbolic form, that of written language. (Certain cases serve as an exception to this rule, as when drawing becomes the dominant method of interacting with reality—the child becomes an artist.)

In other words, when a child draws, it is preparation for creative writing.

As soon as children learn to write, however—learning the technical skill of writing—their creative activity quickly dwindles. It’s a great shame, because they’re still a ways off from using writing as an instrument of communication. But they’ve already stopped drawing.

I’ve always seen this as wrong, specifically from the perspective of developing speech, which is in large part about learning how to express yourself. So I believe learning to write should be relegated to a later developmental phase, when the child has more advanced fine motor skills, and writing will no longer be “painful.”

There’s nothing wrong with taking time between teaching reading and teaching writing. To the contrary, it’s a good idea: under normal circumstances the modern child learns to read a lot earlier than he would have in the last century (with rare exceptions, of course.) It’s a general tendency—the shift to learning to read as a preschooler. Unlike with writing, the child seems to learn to read almost incidentally. Reading in our modern world is increasingly removed from the skill of writing by hand.

Nonetheless, a child who has learned how to read “by herself,” will absolutely incorporate letters into her drawings. These aren’t printed letters, but rather “drawn” ones—the child reproduces them as best she can. She finds the necessary motions herself or tries to copy what she’s seen someone do. All this happens according with her own desires and graphic abilities.

These letters—the drawn ones—are the ones we should be happy about. This self-directed children’s “writing” should be supported because letters born in drawing and written into pictures signal a child’s readiness to transition to written language. It’s just that at the given stage, he chooses to use drawing to communicate.

This is when tactile games with letters will come very much in handy. The letters can take many forms, that is, we can present the same letters in different ways: handwritten, printed, “happy,” “mysterious.” We say a child has “mastered” a letter when he can recognize it in various forms or fonts. That’s the point when it’s become a symbol.

Then again, maybe we shouldn’t teach children to write at all?

Writing, which is insistently and rigidly taught to today’s first-graders, is a rather strange skill from the standpoint of modern civilization. Today, it’s almost exclusively a school skill, one that is practically useless outside of the school. From a practical perspective, it’s much more important that a child learn to touch-type than to write in cursive. It’s hard to conceive of a valid counter-argument —what if the electricity goes out? After all, we don’t teach children to build a fire using friction (outside of the odd wilderness survival class). And we don’t teach them to make kindling or harness a horse—which would also be vital in certain, rare circumstances.

If our inertia prevents us from doing away with handwriting instruction, we need to relegate it to the confines appropriate for a particular art. Then we could show children how to write with a feather pen, or use a stylus. “Historic writing” would be an interesting subject, surpassing familiar subjects like “Art History.” This is where Maria Montessori’s technical approach would come very much in handy.

Just not in first grade. And certainly not before schooling. If there’s not much we can do about the school itself, as parents we can at least create a learning environment that minimizes “damages.”

We should understand what we’re doing and why. In the end, we are looking for the most productive and effective ways of teaching a child literacy. That is, we want to teach him, first and foremost, to read. Reading serves as a foundation for the next skill—the use of written language: writing not in the sense of moving pen across paper, but as in the ability to express one’s thoughts and feelings with the help of graphic symbols that can be produced by hand or typed out on a computer keyboard.