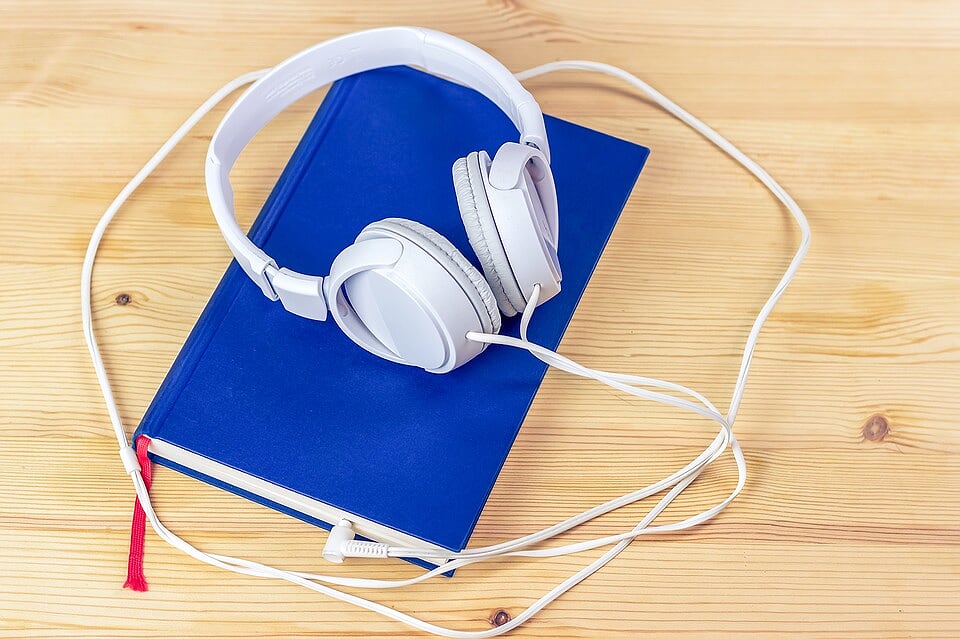 “Some people say they don’t like reading stories, but I’ve never come across anyone who doesn’t like hearing one.” - Aidan Chambers

“Read those summer reading list books! And make sure to get proper editions. No audiobooks!” That’s what they told us parents at the school meeting. And though I’d never been a particular fan of audiobooks, I suddenly felt bad for them. They didn’t deserve that kind of discrimination. What the strict literature teacher said made me consider the role audio books have played for me and my children.

I remember how popular the “Melodiya” records were in my childhood. In my room, these stories, performed by the best Soviet actors, took up a whole shelf, along with the “Kolobok” magazines that came with floppy blue records inside. The greatest vinyl hits—“Old Man Khottabych,” “Ali-Baba and the Forty Thieves,” “Blue Puppy,” “The Town Musicians of Bremen”—were all beloved and well-worn. At that time All-Union Radio sometimes played entertaining radio dramas—usually for adults, but now and again a Kipling for kids would come through.

Unlike me, my children didn’t listen to recorded stories in early childhood. For one thing, I thought the intimate relationship between a child and a new book shouldn’t be interrupted by a third party. What if the unknown storyteller got the rhythm or tone wrong and then the whole story was somehow off? For another, as I’ve come to realize, not all small children can enjoy pre-recorded stories. My boys often had questions or comments while they were being read to. For them, being left alone with an audiobook would have been at the very least uncomfortable.

We owe many of our audiobook encounters to the local children’s library. About a year ago the boys became patrons at an online book database. As it turned out, alongside a wide variety of texts, the virtual library offers audio recordings. The search engine has a function that allows you to search by author and title, but also, conveniently, by the narrating actor. Before ordering the book, you can listen to a sample section of the recording.

That’s how the boys discovered and fell in love with Jack London—through Victor Rakov, who narrated White Fang. Rakov reads the central narration, while other actors perform the dialogues. His low, confidently monotonous voice precisely conveyed the dramatic atmosphere of the North. As it played in the children’s room in the evenings, it sounded stronger than mine could. Truth be told, his voice was also much better suited than mine for this harsh, “masculine” novel.

We soon established a popularity rating for various narrators and that became a major factor in choosing the next audiobook. For example, we found a short, twelve-minute performance of Jack London’s The Men of Forty Mile. It’s unlikely we would have chosen it in book form, but as a mini-radio play it was interesting and clear to the children. Alexander Lenkov lent Oscar Wilde’s The Canterville Ghost even more emotion and expression and the snide mischievous ghost came to life to entertain and frighten us for three nights running.

The narrator‘s voice works like illustrations do in traditional books. The actor can either enhance the text—making it more expressive and vivid, breathing life into the characters—or ruin it by being too boring or even too exaggerated in his performance, not feeling through to the appropriate tone. We’ve come across a few of those as well. Classic works, on the other hand, are often available in different performances, and you can choose those you prefer.

In any discussion of the use of audiobooks for children, there’s an important point to consider: listening along with your child. If we experience the story together, enjoy it together, if we have something to discuss when the book is finished—the process is many times more valuable. That is true, of course, of any activity we do with children, whether it’s drawing or sledding.

The well-known English writer and teacher Aidan Chambers recalls how his family influenced his development as a reader. In his book The Reading Environment, which is dedicated to issues of children’s reading, he talks about how his family didn't read much, but there was a lot of storytelling, and he had a teacher who read to the class every day. He didn't start to learn reading until he was nine, but he always listened to stories, which helped him to become a reader who can "hear" every word he reads.

Listening is often something parents have to learn as well. Many adults claim they have trouble appreciating texts through listening alone. I can relate, as I personally struggled to transition to audiobooks. It felt strange not to hold the book in your hands and turn the pages—strange to feel like a large child being read to. It was also hard to get used to not being able to re-read a section; of course you could rewind, but that wasn’t always convenient. But listening soon became second nature. Once, my youngest son said: “But we’ve already watched this chapter!” And I realized I too had been “watching” rather than simply listening to the story. All that without illustrations or moving pictures on a screen!

We found that books that weren’t too long were best—preferably ones we could finish in a week at most. The Chronicles of Narnia, which was five-and-a-half hours, was just too long. There’s another particularity to the audiobook. If a paper book hooks you with a cliffhanger during bedtime reading, kids can get back to it in their free time during the day. That wasn’t possible with the audio edition, since the kids’ access to the tablet with the audio books was restricted to the evening before bedtime.

When asked what they like about audiobooks, my sons said the following: “Sometimes your eyes get tired and you can’t keep reading, but you can still listen. It can also be more interesting because with an audiobook you might see the story and the characters differently from what you would have imagined for yourself.”

Another useful “feature” of audiobooks is correct pronunciation. In print books children might encounter words whose meaning is fuzzy and which are clear only from the context. When they read to themselves, even avid readers may not be able to tie a word to its pronunciation. Unusual character names can also be confusing and here too the audiobook can easily resolve any lingering doubts.

An audiobook is somewhere halfway between the author’s original text and an interpretation of the book such as a theatre production or film version. I think all these forms of bringing the author’s story to a child are equally useful and valuable, as long as they are thoughtful and well-made.

In his book, Aidan Chambers lists many arguments in favor of reading aloud and storytelling, many of which are equally valid when applied to audiobooks. The interpretation often brings the text to life and helps draw the reader in. The help of an interpreter is particularly welcome when the child may be wary of a difficult text and require some extra inner readiness. Reading aloud helps one understand the construction of the text. It allows the listener to relax: he doesn't have to wade through the printed text, but rather the text has to capture the listener's attention. Hearing the text allows us to form a relationship not with the familiar print on the page, but rather with the experience of the story that happens in our minds.

Maria Kostiukevich
Translated from the Russian by Alisa Cherkasova