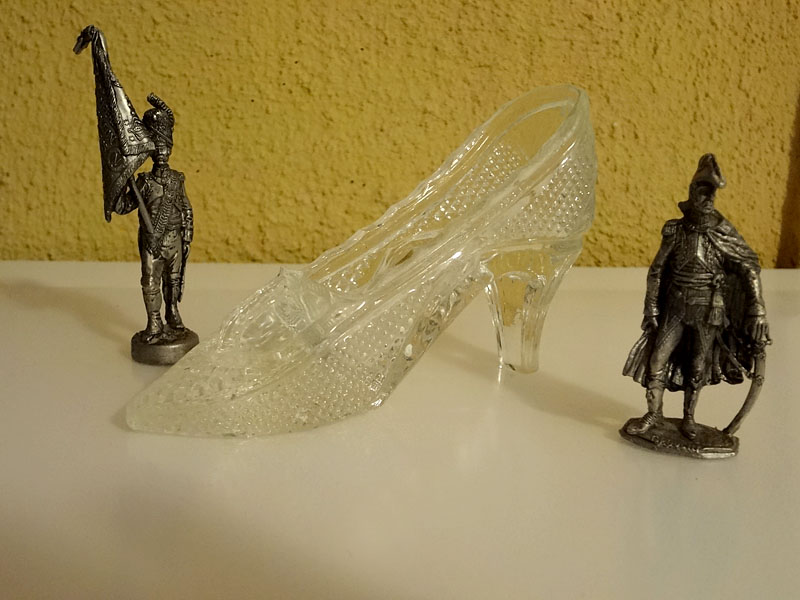 In reading folktales to young children, we rarely ask ourselves whether the child can understand everything in them. The examples are too numerous to count. Could the average adult easily say what exactly a coachman does? What’s the difference between a justacorps and a caftan? Between hay and straw? Some of these things you could point out to a child in the book’s illustrations. Others can be explained. But the object-thinking of a preschooler demands actual, real items. You want to see it with your own eyes, understand its size and scale, touch it, smell it, feel its texture. As it turns out, it’s not too hard to arrange a first-hand encounter with old things.

Museums are places specially created to store old things with care. Of course, many adults feel a sort of reverent awe for museums and are a little anxious about bringing a child into a world where strict “Do not touch” signs abound. Museums and parents will continue to struggle with this “curse” for decades to come. Still, today we are lucky to have many Russian museums—ethnographical, local, historical, and art museums—that have models, copies, and duplicates of antique items, all of which you can—and should—touch.

Every weekend I lead an activity session for groups of six- to eight-year-old children. In the wintertime, we meet at all sorts of museums—both those for children and those for adults. With each visit, I am reminded that a museum is very interesting to a child, that it becomes a space for inner growth—as long they are able to connect their impressions of the museum to their everyday lives, struggles, and experiences, including those they get from books.

I brought a storybook treasure chest to one of the sessions. It was an ordinary box, covered in wrapping paper, filled with various items from different stories. The children took turns taking them out and trying to figure out what story the given item “lives” in. As I expected, there were only two items they immediately identified: a glass slipper (which was actually an ashtray in its ordinary life) and a tin soldier. Now what was this?

The children had all kinds of theories. You could probably dig with this stick...but why were both ends sharp? If it was a needle, where do you put the string? Could it be a hook? Or a paintbrush? Or an old screwdriver?

I didn’t give the kids any hints—neither written, nor spoken. What’s most important to me is that they think for themselves. The guesses can be anything—someone else will absolutely find the mismatch or a mistake, and put forth their own suggestion. To find the answer to this question—what was that mysterious stick with the thick center and two sharp ends?—I brought the kids to the Weaving Hall of the Russian Museum of Ethnography. Within ten minutes, when the kids had peered into all the displays, they were gleefully reporting: “Here it is, we found it! It’s a spindle!” Those who knew how to read helped those who were still learning make sense of the museum label. They found a few more spindles. Then they remembered this story: “But she had scarcely touched the spindle when it pricked her finger. At that moment she fell upon the bed which was standing near and lay still in a deep sleep…”  From the "Sleeping Beauty" by Brothers Grimm. Translated by Margaret Hunt. 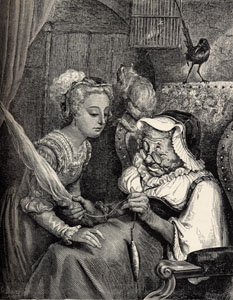 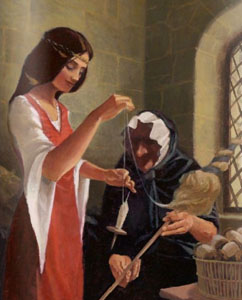 So what’s a spindle for? The children held it, along with a bag of pure wool, which I had also brought to the lesson. By closely examining the museum’s display cases and models, and following the steps they saw illustrated there, they tried to work the spindle—and they got everything almost exactly right! An ancient, forgotten craft came to life for modern kids...with the help of a story and the museum.

But the lesson in the Weaving Hall isn’t over yet. I ask the kids to find items from other stories. And now we’re looking at Russian distaff, another tool used for spinning. “Three fair maidens, late one night/Sat and spun by candlelight.” From "The Tale of Tsar Saltan" by Alexander Pushkin. Translated by Louis Zellikoff.  They “spun”—what does that mean? Did the maidens use a spindle? Are spinning and weaving the same thing? And seriously—why does the tsar need so much cloth? 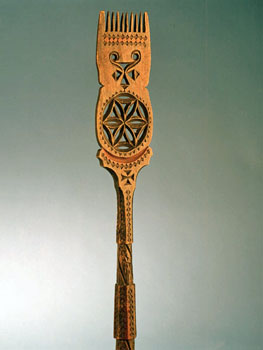 The pieces in the museum exhibit allowed us to reconstruct the whole process of making clothes: how linen is grown, sheep are sheared, how raw materials are processed, how strings are made with a spindle; how people spin, cut cloth, and sew. Nearly every item reminds the kids of a story. Here, for example, is a loom straight out of Andersen’s “The Emperor’s New Clothes.”

We wrap up our lesson with a discussion about the clothes the kids arrived in. What are they made from? Do their clothes know the work of spindles, distaffs, looms? How are clothes made these days? 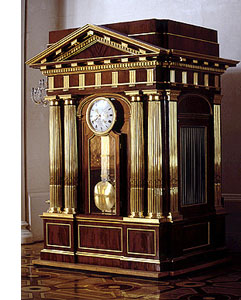 A few years ago, while asking eighth-graders about their impressions from a visit to the Hermitage, I heard: “What most amazed me was the clock with the big pendulum…” I understood then that today’s children and teenagers don’t often get the chance to hear a clock chime, to see a cuckoo in the clock window, to observe the swing of a pendulum.

Since we live in St. Petersburg, the children’s group and I set off to the Hermitage. There are hundreds of clocks there, starting with the famous “Peacock,” which has anything but clock hands or a clock face. But you could conduct this activity in practically any city—local museums and historic house-museums that have antique items are everywhere. Most likely, they have a clock.

In advance of the activity, I asked the kids to bring stories that feature clocks. They outdid themselves—many children brought several books. We ended up with four editions of “Cinderella,” for example. 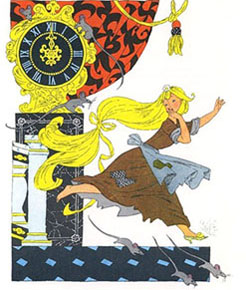 Besides “Cinderella,” the children also brought in “The Nutcracker,” Leonid Yakhnin’s Cardboard Clock Square, Sofia Prokofieva’s Story of the Cuckoo Clock, and Evgeny Schwartz’s The Tale of Lost Time. We remembered the plots and if a story was unfamiliar to some, the kids tried to summarize the book’s contents for their classmates. They were very proud of themselves—it turns out their knowledge and books are interesting to others!

Then we set off through the Hermitage. We never have “museum tours” in the classical sense, instead each child gets an activity sheet or folder with assignments to complete while studying a particular exposition independently. Since only a few children know how to write at that age, assignments usually involve searching for items, sketching them, and making up a story. In this case I photographed the five most interesting clocks ahead of time, but I erased several important details from the images. Each child got five incomplete photographs and had to search for the items in the museum hall (in the process, they were also learning to explore a museum hall independently, without adult help). They were to examine each item closely, find the details missing in the picture, and draw them in. They were also learning to truly see the exhibit, not just its label. The children were also asked to imagine which of the stories we had discussed would be a good fit for each individual clock….

Finally, each participant was to find and draw the most interesting clock—later we looked through all their choices together. We were in for a lot of surprises. Someone had discovered Roman numerals on a clock face—so we set about learning to decode them. Another child had noticed a “missing piece”—an old clock had no minute hand! Our conversation turned to how differently people see time….

While walking through St. Petersburg and the museums, the children and I often speak about what everything around us is made of and how: the spindles, clocks, jewelry boxes, embankments, houses, columns, and lattice work. After all, these children live in a world of culture, a man-made world. I think it’s vitally important that a child feel at home in this world of culture and learn to understand, value, and create it. A whole unit was devoted to wood and wooden items. Afterward, the children and I examined the intricate lattice of St. Petersburg and visited a real smithy, where each child forged his or her own first nail. And then it was time for rocks.

A recent edition of Pavel Bazhov’s Silver Hoof, with illustrations by Mikhail Bychkov, was our starting point. In Bazhov’s “The Malachite Box“ collection, this story stands out as the happiest and kindest one. There’s no struggle of man against nature, no predatory hunt for riches, just peaceful admiration and gratitude. 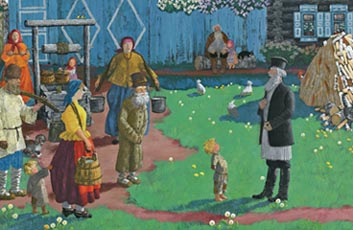 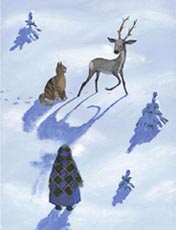 The kids and I read the story and discussed the illustrations in great detail—I even read them the afterword from Bychkov himself, in which the artist talks about his childhood love for Bazhov’s work. A picture he drew as a child is printed alongside the afterword. We all went to a theatre production based on the story. We visited the workshop of a sculptor who works in stone. We asked all the adults we knew to contribute to our collection of jewelry with gems—necklaces, bracelets, pins, earrings, and rings. All the children, without exception—both the boys and the girls—looked over these riches, enthralled, picking out the tones of the colors, the many shapes of the amethyst, jasper, malachite, lazurite, onyx, chrysoprase, and many, many other gems.

Then we headed to the Geological and Prospecting Museum. Once again, we skipped the tour. We saw where rocks were born: the museum had volcanic lava, fragments of a meteorite, and even real dinosaur bones. We saw the different forms rocks take out in the wild; gold nuggets, ore, and gold dust were all on display. There was even a huge slab of rock salt you could lick. Each participant left the museum with every intention of starting their own rock collection—and they began as soon as they stepped outside: is that limestone? Granite? Shell rock?

Of course, we also spoke about Bazhov’s other stories. Later, parents who read their children The Mistress of the Copper Mountain or The Malachite Box after our “rock outings,” told me that the kids listened to these stories with particular interest and a sense of familiarity.

***
Half a century ago, the psychologist Aleksei Leontiev said that perception is not equivalent to understanding. What a person (especially a child) perceives—hears, sees, feels—is not something he or she necessarily understands. And hearing—experiencing!—“The Snow Queen” or “Tom Thumb” or “The Bremen Musicians” for the tenth time, children may understand them completely differently than adults do. Or not understand them at all.

Understanding is separate work, one which demands significant intellectual efforts. It could be that the first, beginning stage of that work is related to figuring out what all those words from the stories mean. The object-world of the old stories differs dramatically from the world in which modern kids live. Immersing ourselves in that world, I believe, will not only give a child the information needed to understand the text, but also help bring vanished worlds to life, to bridge the divide between the past and the present, between the reality of the book and the everyday life of the child.