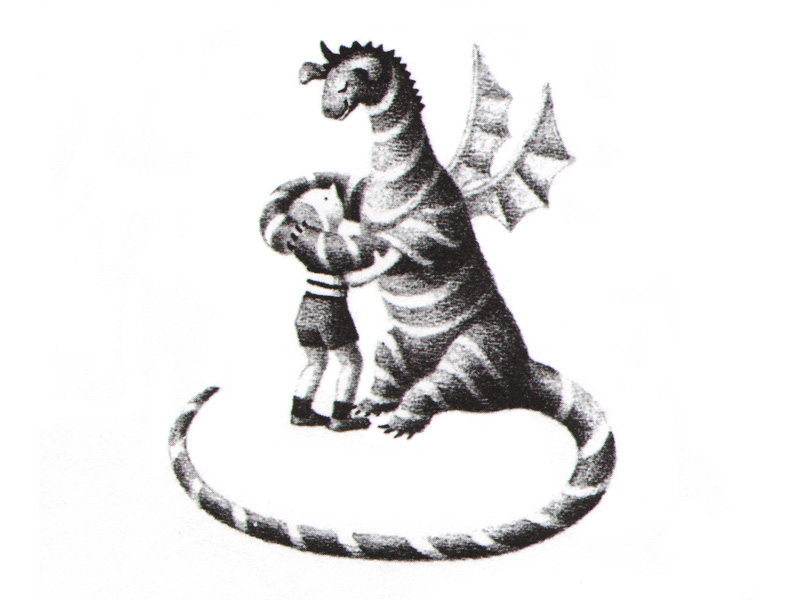 You learn there’s a sad little dragon languishing on a distant, undiscovered island and you realize you’ve got to save him.The problem is that you’ve committed to a dangerous adventure without ever having seen or heard of the island or the dragon before. And if you don’t act fast, sooner or later, the doubts will creep in: do the dragon and the island actually exist?

The story, Ruth Stiles Gannett’s My Father’s Dragon, has several narrators [a recent English edition: Dover Publications, 2019. ISBN 9780486837499]. The first is a child, the author of the book. (It won’t even occur to a reader that it could be, say, a grown lady, writing her book in the unimaginably distant past—1946.) So, of course, the author is a young boy, a child the reader’s age—it couldn’t be otherwise. Especially since he’s retelling the adventures the second storyteller, his father Elmer, had when he was little.

But there would have been no adventures if it weren’t for the third narrator, the cat little Elmer picks up on the street one day.

Elmer’s mom doesn’t like cats, and she’s adamant about not letting any into the house. Elmer quickly realizes that if Mom says “no,” there’s no hope of a “yes.” And so he leaves home, along with the cat.

The cat breathes free and starts reminiscing. Once, he was traveling across the ocean and ended up on Wild Island. No, no. First, it was the Island of Tangerina—a happy place, a blessed land. And then from there he went right to Wild Island. 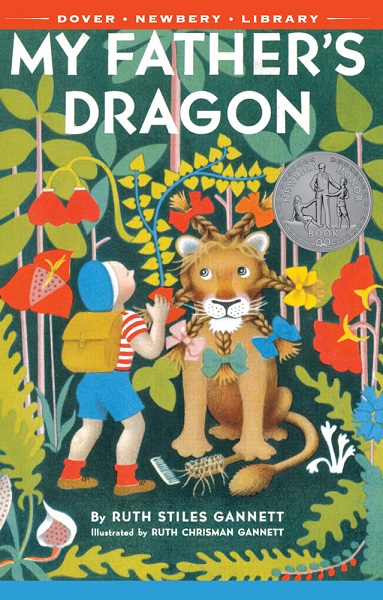 That’s where the baby dragon is held, tied to a stake. The tigers and gorillas that dwell on the island use him as a form of transportation. A dragon is a strong, flying animal and can fly across the wide, muddy river that cuts through the island. Otherwise, it’s a long, hot, boring slog to get around it. They need someone who will carry a heavy gorilla or scary crocodile through the air. Crocodiles could have carried passengers and mail across the river, but crocodiles are very moody, and not the least bit dependable, and are always looking for something to eat.

And so the little dragon’s fate is decided: he’s held captive, tied up and enslaved. He cries, with no hope of relief.

The dragon must be saved! Elmer sets off on an adventure, the coordinates for which can’t be plotted. He has no map, no money, no adult to help. In the end, what he has is just right for things to turn out exactly as they should.

But little Elmer, our narrator’s future father, doesn’t know that yet.

That’s not to say he doesn’t prepare for his journey. He absolutely does.

He took chewing gum, two dozen pink lollipops, a package of rubber bands, black rubber boots, a compass, a tooth brush and a tube of tooth paste, six magnifying glasses, a very sharp jackknife, a comb and a hairbrush, seven hair ribbons of different colors, an empty grain bag with a label saying ‘Cranberry,’ some clean clothes, and enough food to last [him] while he was on the ship.

Elmer’s foresight in his preparations will surprise us: not one item from his backpack will have been chosen in vain. Every single one comes in handy when he gets to Wild Island.

Plenty of surprises await. But all will seem to conform to a certain order and rhythm—at least when it comes to breakfasts, lunches, and dinners.

Elmer crosses the ocean hidden in a sack of wheat stowed on a ship. The sailors suspect there’s something else in there, but it never occurs to them that it could be an actual person. “Dried corn on the cob!” they decide, and unload the suspicious bag along with the others. The merchant in Cranberry who had ordered the wheat didn’t count his bags until the next morning. (He was a very punctual man, and never late for dinner.)

Mealtimes turn the plot in our protagonist’s favor. Step by step, snack by snack, Elmer moves toward his goal. There’s the negotiation with a rhino, the bridge built from crocodiles, the meeting with hungry tigers—the mission to save the dragon is a slow one. The book, on the other hand, is a quick read.

“Maybe you think we have regular meal-times, but we don't. We just eat whenever we're feeling hungry," said the fifth tiger.
"And we're very hungry right now. In fact, I can hardly wait," said the sixth.
"I can't wait!" said the seventh tiger.

The adventure could well have become scary and dangerous, but in the end, it’s funny. The situations little Elmer finds himself are poised to be dramatic, but devolve into a fun adventure, where everyone gets what he most needs—and what he most needed so as not to become mean in the first place. There’s an irrepressible hope that all will be well. Not only will obstacles be overcome, they may pass practically unnoticed.

"Lollipops!" said the crocodile. "Why, that is a treat! How about it, boys?"
A whole chorus of voices shouted, "Hurrah! Lollipops!" and my father counted as many as seventeen crocodiles with their heads just peeping out of the water.

The road ahead is a fun and easy one: the tangerines haven’t run out, you can convince predators you’re more than food, and you get to fly back on a dragon, rather than coming back the way you came, where you’ve seen and tried it all.