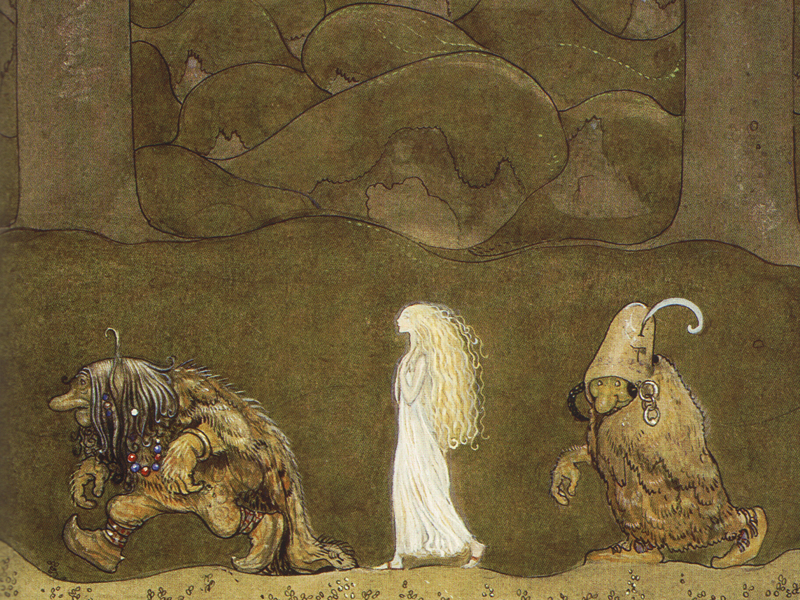 In winter, when it’s dark out almost all day, fairy tales hit the spot. Even if you’re all grown up. Especially satisfying are unusual stories with unusual illustrations. Recently, someone gave me a copy of Among Gnomes and Trolls, an anthology of Scandinavian fairy tales with illustrations by John Bauer, a Swedish artist from the turn of the 20th century. [These fairy tales have been published in English several times, with the latest edition under the title Swedish Fairy Tales (Sky Pony, 2015. ISBN 9781634501927)]. Bauer decided that for Christmas each year he would put out an illustrated almanac and Swedish children got the first issue of Among Gnomes and Trolls for Christmas 1907. I certainly wouldn’t mind a Christmas gift like that. Every page of the anthology seems to glint silver and it almost smells of pine trees and wet, salty stones. The illustrator’s talent is immediately apparent. The Scandinavian winter is very long, like our Russian one. And these fairy tales with John Bauer’s illustrations are like lanterns shining a light into that darkness and helping us get through the winter dreariness.

In the foreword, I read that the artist would always wander the Scandinavian mountains with his sketchbook. He ended up with the oddest gallery of strange creatures. The trolls of Norse mythology are mean and ugly. People believed they stole children and made them bad and disobedient. When we were little, my mom would sometimes call us “troll changelings.” Imagine my delight when I came across a story called “The Changelings” [by Helena Nyblom] in this anthology!

John Bauer drew the trolls as though he’d seen them himself: hunchbacked, huge-eared, with enormous noses and hands—a terrifying sight! There are also the strange huldra-women with their cowtails and the domestic sprites in their little caps. These creatures and images could only be the product of long, dark nights. They’re reminiscent of our domovoys, leshys, and rusalkas, but also completely different in some ways. In any case, I don’t think we have trolls in Slavic mythology. 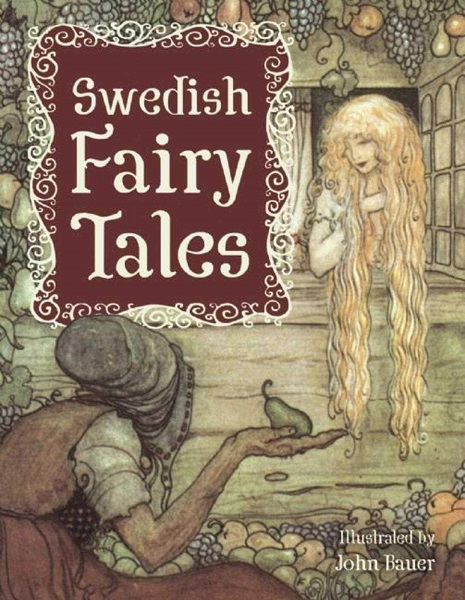 John Bauer’s humans, however, are a different story altogether—slender and light, almost like candles. They take on those dark forces with their light and the warmth of their hearts. For example, there’s Harold Östenson’s “Dag and Daga, and the Flying Troll of Sky Mountain.” The story reminds me of Hans Christian Anderson’s The Snow Queen. Dag is kidnapped by a huge troll and his sister Daga sets off to look for him. She’ll go to any lengths to bring him back, even turning down a gold crown and life at the royal palace. The troll backs down before her bravery and patience, and in a fitting end for a fairy tale, she marries a real prince.

The other thing I like in this anthology is the notes in the margins about various Swedish traditions and beliefs. I learned that Swedes considered white swans to be bearers of happiness and good fortune, while black swans were seen as harbingers of death and servants of evil. Those beliefs form the basis of “The Swan Suit,” another fairy tale by Helena Nyblom. I wonder if Tchaikovsky was familiar with the story when he wrote his ballet Swan Lake?

Sometimes, it may seem like we don’t need to read fairy tales anymore. But that’s just not true. Real fairy tales speak to you about love, life, and death. They have that light we so often need in our day-to-day lives. I’ve read a lot of fairy tales but I think Scandinavian ones are the best in the world. I’d like to learn Swedish (and maybe even Norwegian) to share that light with others.