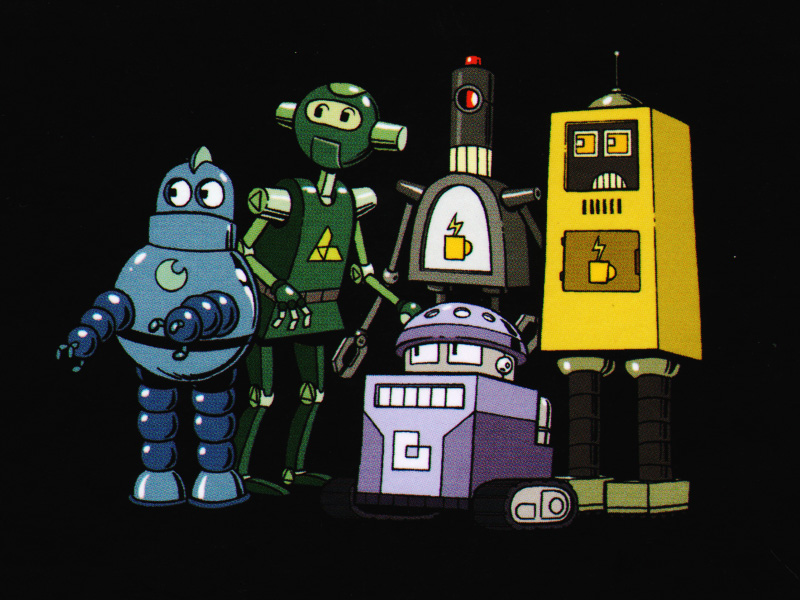 It all started with Norton. A little robot from a picture book.

“Something is a little different about him,” said Matvey, who’d just been to a robot exhibit.

“It’s just that he’s made up,” I explained. “You probably have a very specific idea of what a robot should look like.”

“Well, yeah….Big yellow eyes, a rounded head, a little locked door in his body. And, you know, those square things in his legs, so he can move….

“What’s behind the little locked door?”

“Lots and lots of wires. And his power supply.”

“Yes, but it’s like this metal cube, which lets him know when there’s danger.”

So does Norton have a heart like that? Before asking Matvey, I suggested we read the story. [Kristyna Litten. Norton and Alpha. Most recent English edition: Sterling Children's Books, 2017. ISBN 9781454924999.] 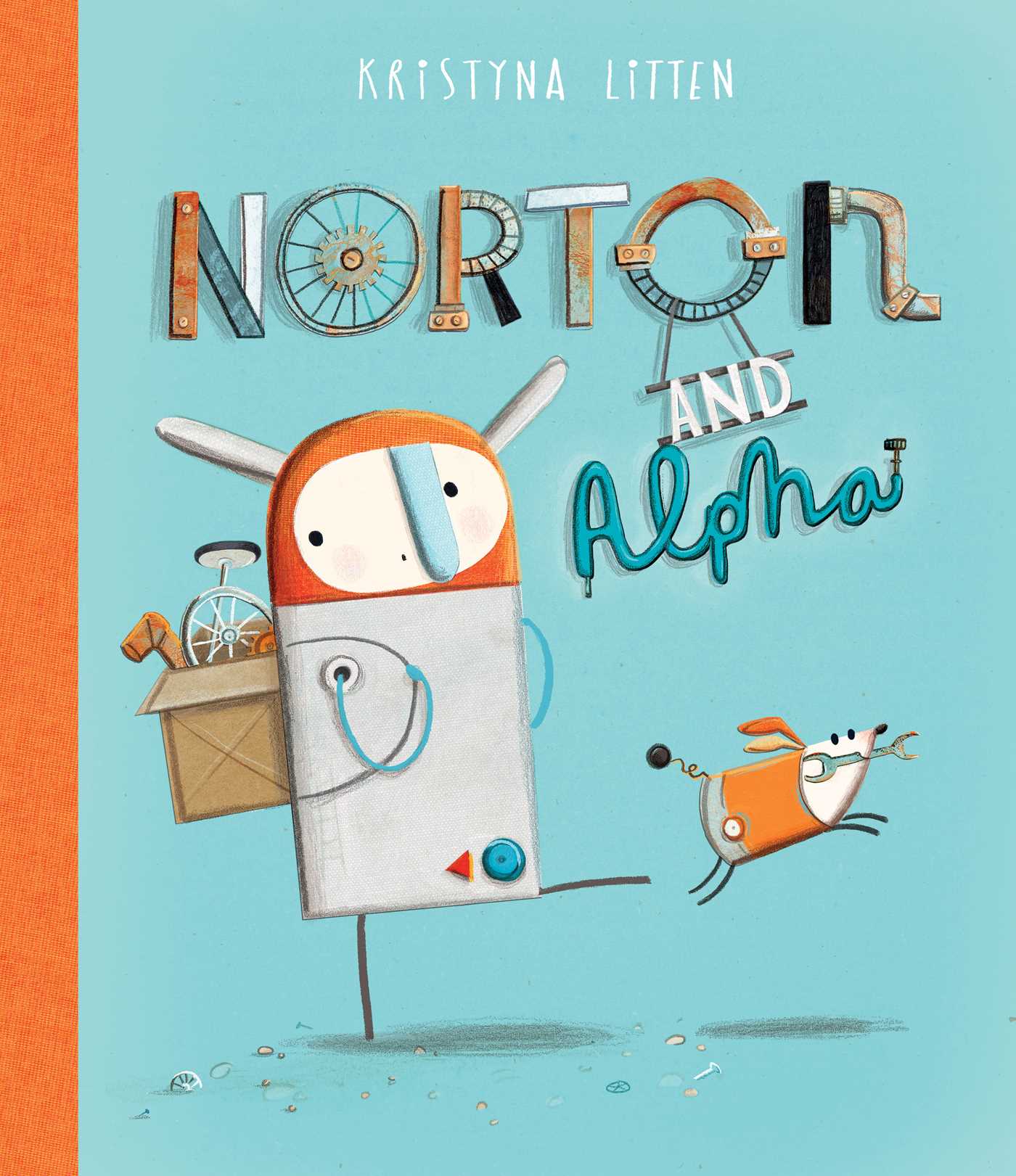 Norton lives alone and goes around picking up all kinds of things on the street. (Not unlike Matvey!) There are cans, sticks, springs, building materials…..And one day he uses them to make himself a robot dog named Alpha, who helps him find a very strange object.

“What’s so strange about it?” asked Matvey, surprised, taking in the picture.

So Matvey imagined. “I would think those were antlers. A deer’s antlers, for example.”

“Wow, I would never say those look like antlers.”

All right, say they’re antlers. To be fair, Norton probably wouldn’t know what antlers were either. He throws “it” out the window, into the rain.

Several pages illustrate a whole week passing by. And all that time Norton and Alpha are sitting at home. When the rain finally stops, they head out the door. What follows is probably the book’s coolest spread, because you can open the pages up like doors. 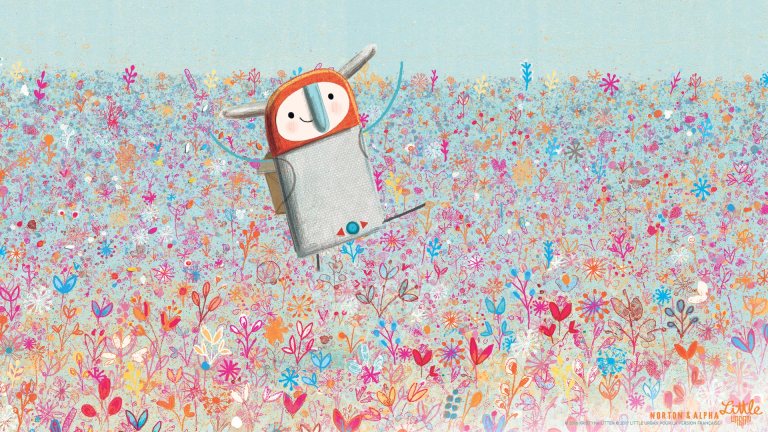 That’s right, “it” is a flower! How would a robot know about something as amazing as nature? But when he finally does see and feel it, he’s on top of the world!

“Just like me this summer.” Matvey smiled, looking at the happy robot holding a bouquet.

Looking down at that image, I couldn't help thinking of another great robot book. It’s about a robot who achieves such harmony with nature, that she becomes a part of it.

The Wild Robot by Peter Brown [most recent English edition: Little, Brown Books for Young Readers, 2020. ISBN 9780316382007] is incredibly touching—kind and full of heart, and it totally charmed me and Matvey. It’s no picture book. It’s a real “word-book,” as Matvey decided to call it. You can’t read it in one go. You’ll need several nights to learn the whole story, live through it all along with the characters, until they grow so familiar that you’ll be sad to put the book down once it’s over. 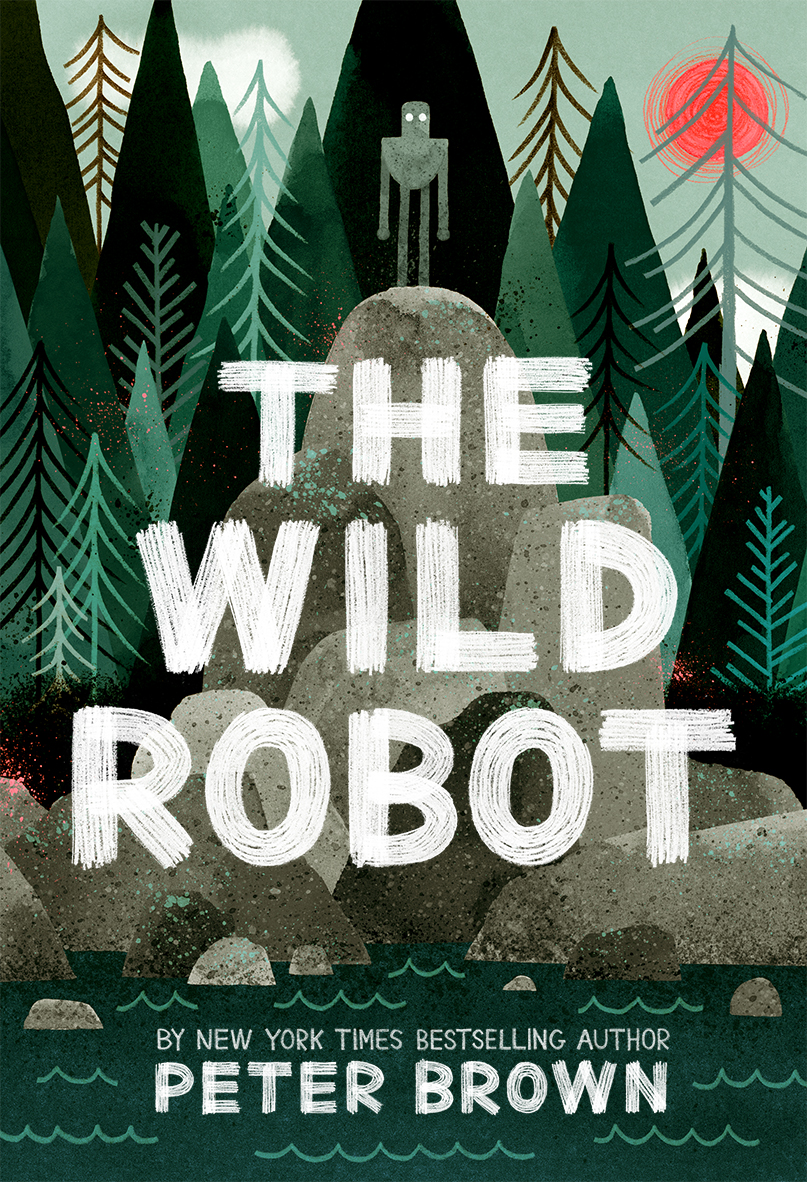 Roz, the “wild robot” of the title, was our bedtime helper for over a month. There was a short chapter or two before bed and a whole lot of fun and conversations during the day. We talked about how the robot, who was just a machine, became part of nature. How she, a machine made of metal, became an animal and even, somehow, human. How could that be? As the only robot to survive a shipwreck, Roz was left to her own devices on a deserted island. There, learned the language of the animals, adopted a gosling she raised as her own, and survived a ton of adventures along with her new friends.

“Do you remember how everyone was scared of Roz when she first washed up on the island?” Matvey asked, when the end of the book was in sight.

“Of course,” I said. “But they didn’t know her and they thought she could hurt them.”

“That’s the way it goes.” Matvey was nodding. “I don’t really talk with people I don’t know either, but then when I get to know them, we become friends. I would be friends with Roz. She’s really nice and she helps everyone.”

“No, not metal. I mean, to be as understanding as she is. Look, in this book it turns out that a robot can learn to love and feel. That’s something even we humans don’t always know how to do.”

“I do though,” Matvey assured me. “I love you. Like Roz’s gosling.”

I laughed. That was probably the best profession of love I’d ever heard from my son.

So what’s so special about The Wild Robot? The words? They’re simple. The plot? Maybe. But what really stands out is the love in the book. The author did a great job making the robot “human,” using the example of a mother-son relationship (with the robot as mom, and the gosling as her son) to illustrate that nothing is impossible when you love someone! And when you love nature, accept it, and care for it, nature will return in kind.

“Is that why all the animals started defending Roz when the other robots came for her?”

“I would defend you too,” said Matvey. “Even if you were a robot.”

Then, just in case, he checked if I had a power button on my neck like Roz did. Or maybe I had a little compartment in my stomach, like the robot he’d imagined.

We later learned that not all robots have that little door, and lots of facts about how they came to be and change over time in another wonderful book called Robots and Drones by Mairghread Scott and Jacob Chabot [most recent English edition: First Second, 2018. ISBN 9781626727922]. 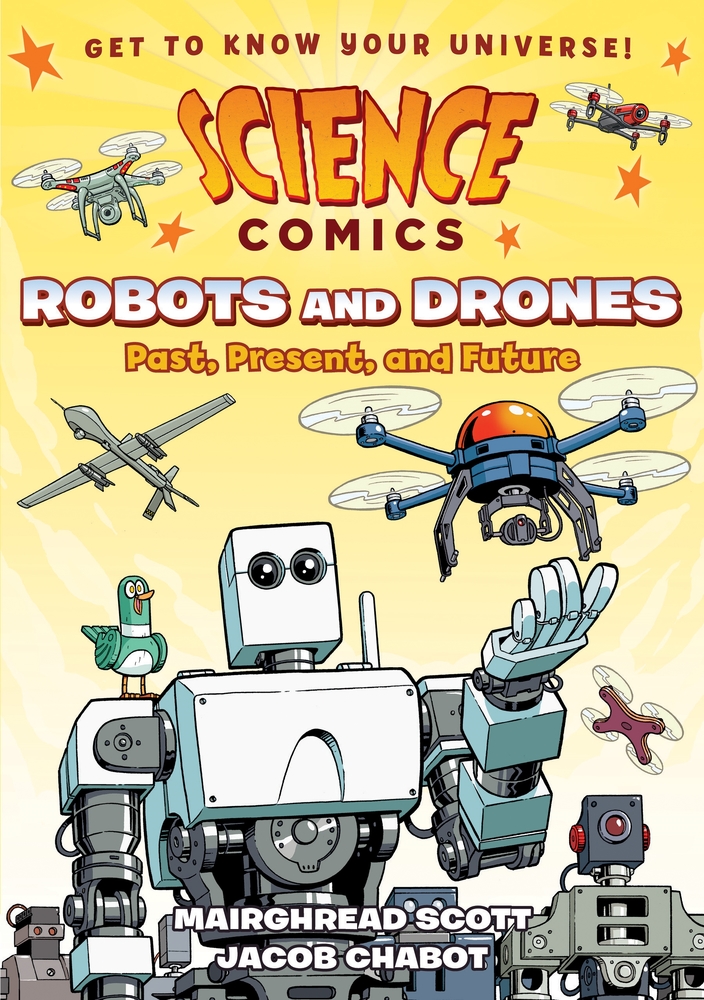 What can I say, we both love comic books.

Robots and Drones features Pouli, the world’s first robo-bird, who guides us through the book from the first page to the last.

To be more precise, this steam-powered pigeon wasn’t exactly a robot, but rather the first mechanism that could fly through the air. It was invented in Italy way back in 350 BC! Pouli led me and Matvey through the books’ pages, hoping that she’d evolve like all the robots she was telling us about.

First and foremost, Pouli told us what a robot really is. Turns out, even a coffee machine or a slow cooker is a robot of sorts. But a computer isn’t!

“How does that work?” Matvey asked, quizzical.

I was right there with him—I’d always been sure a computer was a kind of robot.

We read that a computer doesn’t change anything outside itself, so it can’t be considered a robot. Still, most robots do have computers inside them!

“Do you get what they mean here?” I asked.

All through the rest of the book we encountered inventions, mechanisms, and all kinds of strange and amazing things—many of which I’d never even heard of before.

Not to mention the scientists’ and inventors’ names! 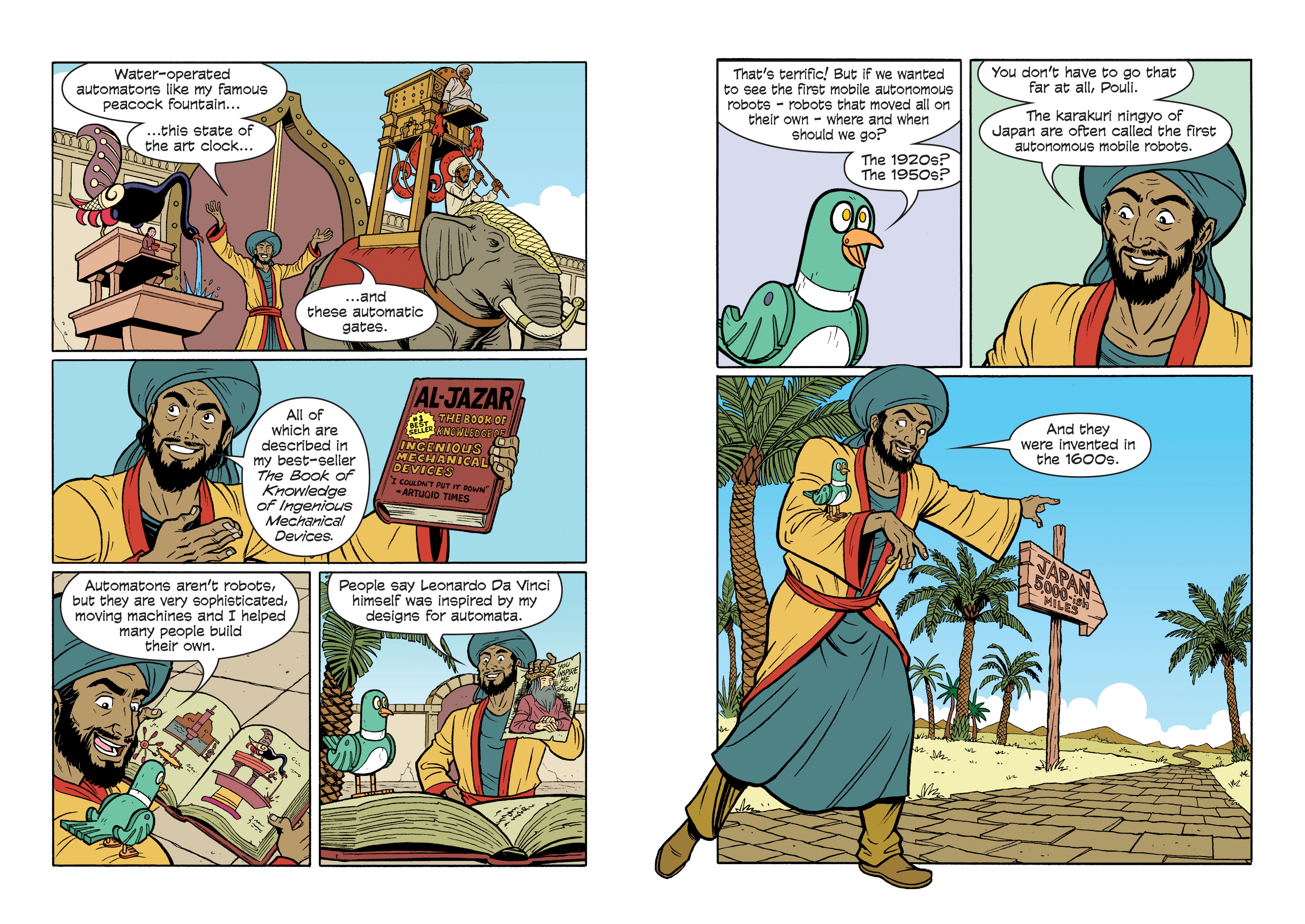 “Yeah, but he wrote about robots. So he also kind of came up with them.”

Actually, everything makes perfect sense in the book—it’s almost like a mechanism itself. Plus, its clear illustrations are an excellent learning tool.

Any reader will be captivated by this crash course, which takes us from those first ancient robots through all the changes that have resulted in today’s machines, not least because of the detailed illustrations. Once you’re tired of reading, you can just look at the pictures. Matvey and I had a lot of fun covering up the text and guessing what was going on.

“No thanks, but I’d love a nice big helping of electricity!”

Those are the dialogues we had along with the characters, checking our guesses against the text. And we were almost exactly right! Except for maybe a few technical details....

Immediately, my phone lit up and responded with a pleasant female voice: “How can I help you?”

If you’re wondering, I did eventually ask Matvey if Norton had that “metal cube” in his chest, too.

“Of course!” said Matvey. “Every robot has a heart!”

Irina Zartayskaya
Translated from the Russian by Alisa Cherkasova