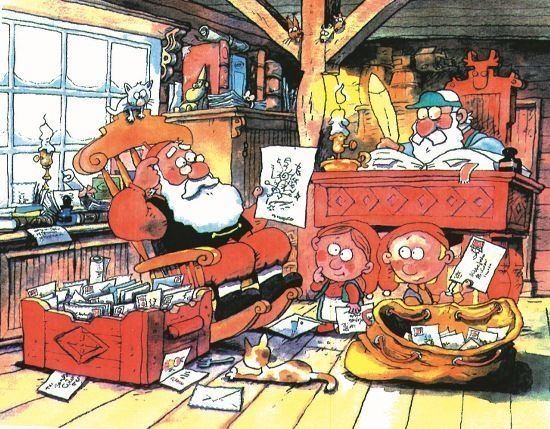 Mauri Kunnas is a Finnish cartoonist and children's book author whose books have been translated into over 30 languages. One of his best known works is a series of books about Santa Claus: Santa Claus, Twelve Gifts for Santa Claus, and Santa and the Magic Drum (all three books were published in English in the 80s and the 90s). 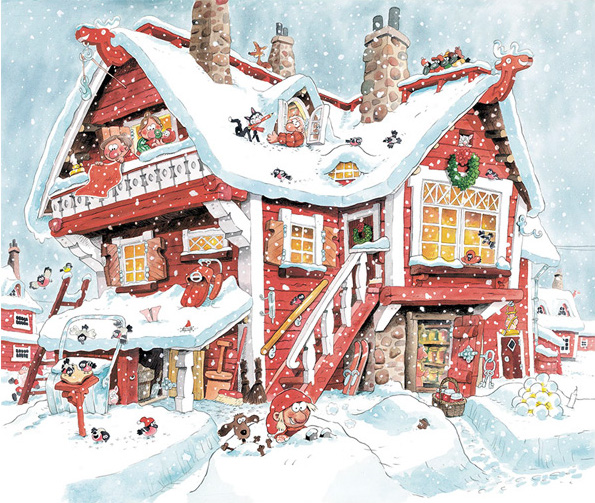 What’s funny is that the legendary Santa “expert,” as Kunnas is known, never actually wrote about Santa Claus. His stories featured Joulupukki, Santa’s Finnish counterpart. Each European translation has its corresponding local Saint Nick: Italian children read Kunnas’s tales about Babbo Natale; in France, the protagonist is Père Noël. In Germany, he’s Father Christmas, while in the Russian translation, he’s Santa Claus, as in English-speaking countries. Makes sense—after all, he doesn’t look like our Grandfather Frost, and he’s a Christmas character rather than a New Year one. Joulopukki would be quite exotic to Russian readers, while Santa Claus is familiar to most through animated films and pop culture. 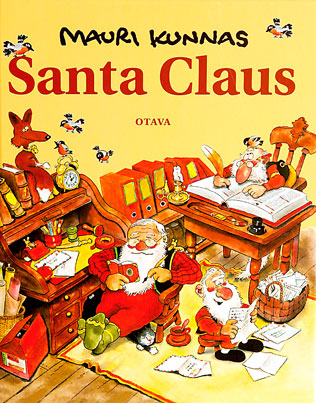 The translations choose a local name not just for the main character, but also inside jokes from the author, such as the titles on the bookshelves of the workshop. On the other hand, the little messages to friends that Kunnas hides in the pages are practically impossible to translate. Then there’s the joke about Santa’s nickname. A reader outside of Finland would struggle to understand why Santa’s wife calls him “little goat.” That moniker is not associated with Santa as we know him, but Joulupukki is Finnish for “Christmas goat.” The character that embodies Christmas in Scandinavia may look like our Santa Claus now, but two centuries ago, he had horns and a goat fur.

Each year a new generation of children first learns of Grandfather Frost, Santa Claus, or Joulupukki and needs its answers. Where does he live? What does he do in the summer (or spring or fall)? Does he have a family? How does he get into the house? How does he know whom to give what? And how does he manage to get all around the world in one night? The answer to this last question remains a mystery, Mauri Kunnas admits, but he gives detailed answers to the rest.

The Finnish Santa lives in the tiny village of Korvatunturi—far, far away, to be sure, but a real place you can find on the map. This part is not of Kunnas’s invention—it was back in the late 1920s that Mount Korvatunturi was proclaimed Joulupukki‘s official residence. There, Santa has his own airfield, a herd of reindeer, a house, workshops, and many magical helpers, former house elves pushed to the Far North as the world of people expanded across the globe. (The third book in the series, Santa and the Magic Drum tells the story of one such helper.) The elves have lots of jobs in Santa’s village and while some are skilled artisans, others are excellent organizers or bookkeepers. They make sure all the children in the world get their presents, but they also celebrate Christmas themselves. It’s a little odd if you think about it: the elves attend Christmas mass in a church. It seems in modern mainstream culture Christmas is celebrated by everyone: animals, trees, people, stars, elves, and fairies alike.

In describing the elves’ workshops, Mauri Kunnas’s memories of his own childhood and his father’s workshop shine through. According to the author, the first book, Santa Claus, is full of the spirit of an old Finnish house. Kunnas’s Santa is old but not exactly ancient and his home gradually acquires various modern innovations. While the first book (written forty years ago) shows an extension cord on the floor of Santa’s office, the third book (1995) has elves using a computer. To be fair, there’s a lit candle on top of the monitor, next to a stack of floppy disks. It’s how Santa’s house is run—he and his helpers won’t turn away from the familiar, but they complement the old and well-loved with the new, convenient, and useful, whether that’s a caramel-making machine, computers, or planes. 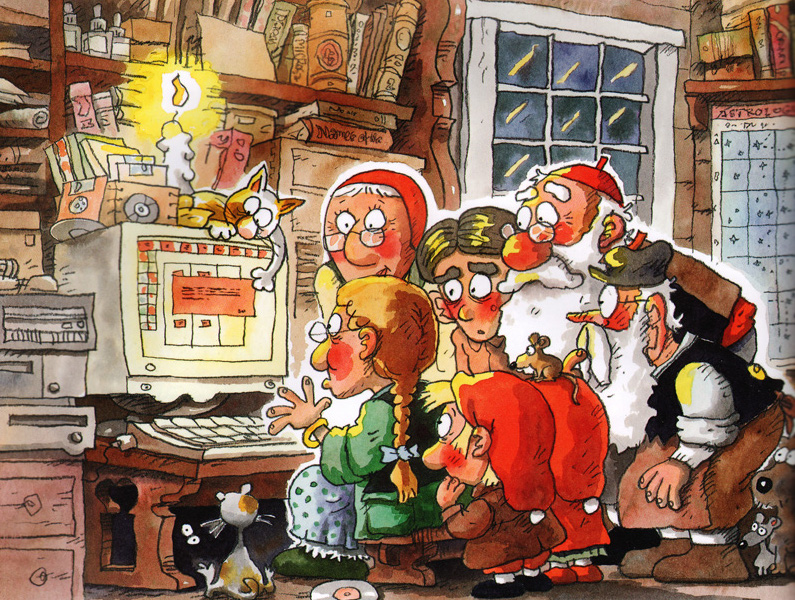 The fact that many parents get their children gifts is one such useful innovation. It’s a good thing, the books say, because even Santa can’t fulfill everyone’s wishes from around the world in one night. It’s not a new explanation, but it’s a very effective creative choice: Santa Claus isn’t omnipotent. He too can get tired, catch cold, or go to the gym. It’s significant that he ceases to be a function, a living bag of gifts. Even very small children quickly start to take presents for granted, but it’s time to learn to think of others, a new and important challenge.

Twelve Gifts for Santa Claus, the second book in the series, is about learning this lesson. The book was the author’s gift to himself, written as he spent the winter of 1985 in California. Kunnas acknowledged that while San Francisco was one of his favorite places in the world, the holiday season can make one particularly homesick. Santa’s fictional home fills up with new details and motifs. With his childhood beloved picture books by Carl Larsson in mind, Kunnas packs the illustrations with Swedish lore and hints at Christmas in San Francisco. 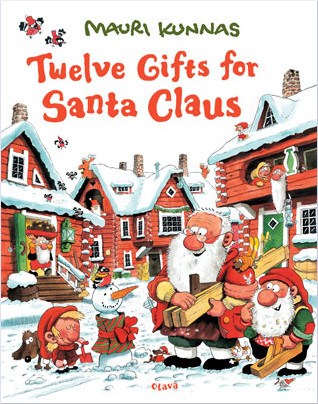 The plot is as follows: one of the youngest elves wants to give Santa Claus a gift. But it’s twelve days to Christmas and he decides on an Advent calendar of sorts: a little surprise for each day. As readers can imagine, one surprise can be a lot to handle, but here we’ve got twelve back to back. You can only marvel at Santa’s patience and calm, as he demonstrates the wonders of positive thinking. Leaping onto the mantel in shock at one of the surprises, Santa is “delighted” to discover he must be in great shape.

Of course there’s a lot of adult irony here that helps to accept such surprises, but I think many of us would take presents like this stoically at best. Both the giver and the receiver need support here. Because if the former is turned away, how can he learn to give well? How can we hold on to that desire to bring joy to another? For a child, it’s no less important to learn to notice and ask: what’s really happening here? Was it really such a good idea to make an ice rink right at the door to the sauna?

Santa and the Magic Drum veers again from the two previous books, most notably in that it has a clear plot. Here, you couldn’t quite do without it, because it’s based on the script of a story Kunnas wrote for a Hungarian animated film studio (the resulting movie was released in English in 1996). 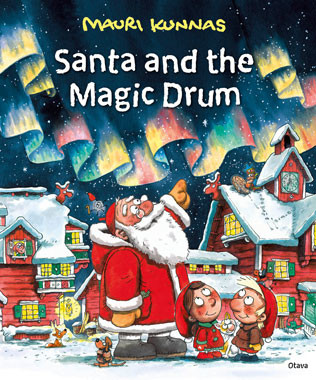 Just like in a play, Kunnas first introduces our cast of characters and gives each a brief annotation in the way of staging instructions. What follows is the story of a Sami shaman who’s resolved to ruin the holiday cheer in Santa’s village. Kunnas then assembles the set: a map of the Christmas village unfolds before us (on it is the skylight the shaman will fall through later in the story.)

The story is markedly cinematographic: there’s the stage, dialogue, a big event or set of events, the change of scene. As the story unfolds, the characters move from one workshop to the next, giving us another peek into the Christmas village and its master artisans. The characters try to figure out what a little boy named Vekara wants for Christmas, based on the picture they receive on a yellowing bit of paper. Naturally, each elf sees something different: a sweater, a book, a plane, a drum kit, and so on. Meanwhile, strange and unlucky accidents are afoot in the village, Santa’s been down with a cold, and his wife is desperately trying to help him get better in time for Christmas Eve.

The happy ending is assured: the grouchy old man becomes one of Santa’s elves, just as he’s dreamed of since childhood. In his joy, he helps Santa get well and sets off with him to deliver children their presents. The gifts are quite concrete, just like those they tried to pick out for Vekara. No one was able to guess what he’d meant by his picture: he’d simply wanted to be Santa’s helper, and he wanted to get an answer to his letter. 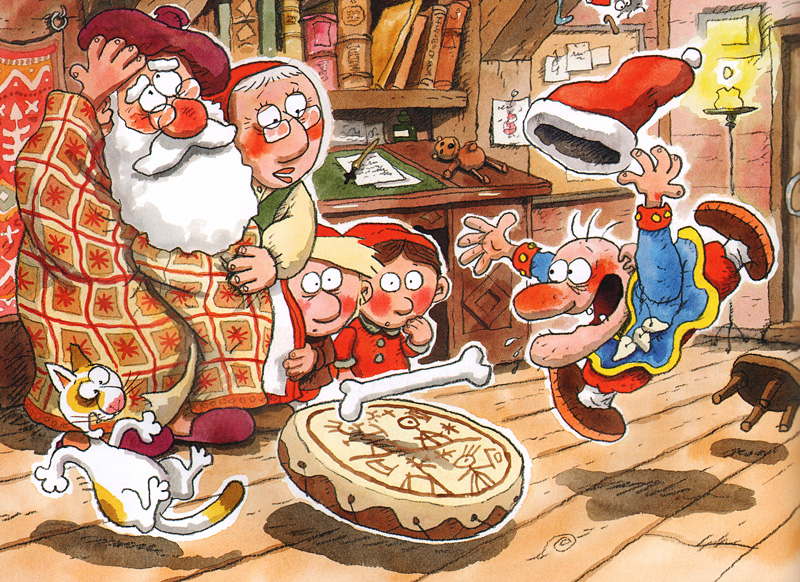 Kunnas’s books about the Christmas village and its residents are also an answer. They’re the answer to many asked and unasked children’s questions about the Father Christmas, no matter what he’s called. They’re also the invitation to come up with more details—so much, after all, remains outside the frame.

American psychologist Eda Leshan, author of the popular When Your Child Drives You Crazy, writes that in order to rid the myth of Santa Claus of all traces of manipulation, it’s important to let children not only imagine their own story, but also to become participants and co-creators themselves. In Kunnas’s series, the co-creators are little Ville, who just wants to make Santa happy, the grumpy shaman, who’s always dreamed of becoming a Christmas elf, and, of course, along with them—the books’ readers.