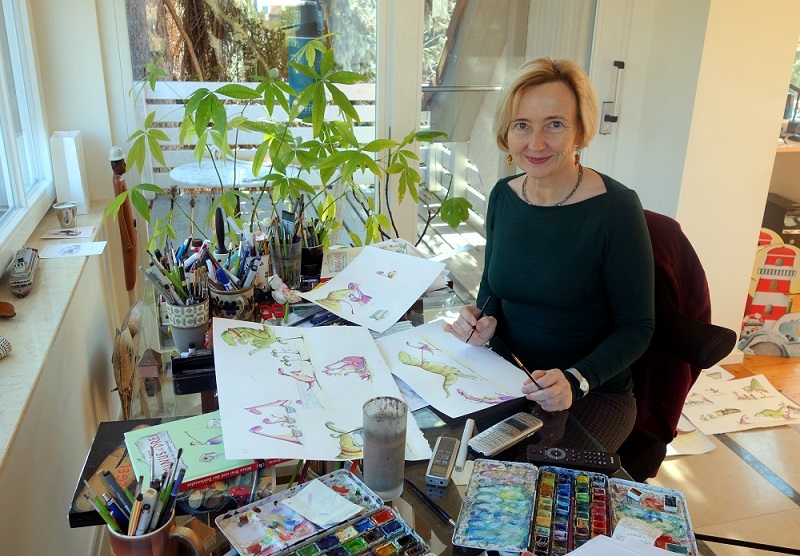 I have a really big family. There are about 9 to 22 of us...depending on the day.
This is my dad. He's a bandit. Each week me and my bandit siblings—Eric, Elvis, Eddie, Ellie, Ebbie, and Edwina—help him work. When we’re done helping, we pack our bags and make sure that Edwina has her pacifier. Then we visit Mom.
It wasn’t always this way.
In the beginning, we were a very ordinary family—even for bandits.
Then one day Mom and Dad invented a new game. They were having a little disagreement—and it wasn’t about which bank to rob.
They just weren’t getting along…
...until one day Dad moved out.
We missed him terribly. Without Dad, life was only half the fun.
So we packed the bags, made sure Edwina had her pacifier, then went to visit Dad.
And from that day on we traveled back and forth with our little suitcases.

Ute Krause has written over forty books (including three YA novels and many picture books) and has illustrated over 400 books. Her stories are modern classics in Germany, but most have yet to be translated to Russian and English.

No Ordinary Family! holds a special place among Krause’s books. It deals with a difficult topic—divorce. I wanted to speak with Ute Krause about this book in particular, because while it is incredibly funny, there’s a big idea behind the text and the author’s views on divorce differ considerably from what we are used to in Russia.

- Ute, you’ve written and illustrated a book about divorce. You dedicate it to your “patchwork family.” Did the book grow out of personal experience?

- Yes, at one point I became a member of a patchwork family myself.

- Is “patchwork family” a metaphor or a term?

- In Germany, it’s a term. It’s what we call families where one of the partners entering into a new marriage already has children from a previous relationship. Or both partners already have children. The new family is formed from the “patches” of previous families. In Berlin there are many such families. About 80% of my son’s classmates grew up with families like this.

- Are they generally the children of the husband or the wife?

- It could be either. In Germany, parents get joint custody of children after divorce. Mothers and fathers spend the same amount of time with children. Expenses for the child are also split equally.

- So the children going back and forth with their suitcases [in your book] isn’t an entirely invented situation?

- No, it’s quite common. Is it not like that in Russia?

- I haven’t heard of any such cases. For Russian readers, the part about the suitcases reads more like humor.

- What happens to Russian children when their parents get divorced?

- Now I’m the one giving the interview! I guess I’ll have to answer for Russia. In the vast majority of cases, children stay with the mother. If the fathers continue to be a part of the child’s life, their involvement is limited to paying child support (25% of one’s official salary) and brief visits on the weekends. We call these dads “visiting dads” or “Sunday dads.” A Sunday dad will take a walk with his child, then take her back home to Mom.

- So fathers don’t have a room for their child at their own house?

- In Germany, in Berlin, it’s very common. Fathers have realized that they miss out on a lot when they watch from the sidelines as their children grow up. They try to be a big part of their children’s lives. Of course, a lot depends on the kind of work they do. There are different arrangements depending on the situation. One acquaintance, for instance, sees his children on Thursdays and Fridays. He stays until bedtime and puts them to sleep. On the weekend, the children come to stay at his apartment, where they have their own room. While their father takes care of them or they stay with him, their mother is able to get her own work done. Sometimes, children spend a week with one parent, then a week with the other. Or ten days at the mother’s house, and four days at the father’s. It all depends on the given arrangement. Each situation is different. But fathers’ rights have seriously expanded. It’s very important for children to have a father, and fathers have demanded that that be recognized on a legal level.

- You’re saying it was the fathers’ initiative?

- In Russian society, a child is practically considered a part of his or her mother. And of divorce, you usually hear: “He left me and the children.”

- Even if the divorce was the wife’s decision? After all, it could be the woman that leaves the family.

- It feels like in Russia it’s usually the men that leave.

- It takes two people to build a relationship, of course. Each partner brings something to the table, both when it comes to building the relationship and when it comes to ending it. In Germany, divorce is always mediated by a lawyer. Each of the former partners has an attorney to represent them. The two conflicting parties resolve their problems with the lawyers’ help.

- Of course, it’s only right to direct conflicts into a legal framework. But while the emotions are still bubbling up inside you…

- Of course, issues do come up and in the process of divorce adults find they have a lot of resentment and emotional challenges to deal with. Still, divorce is hardest on the children. Parents need to understand that. In my book, I am an advocate for the children. They don’t really get a say in what happens. They find themselves in difficult situations that are often created by adults. Many adults...let’s just say they’re adults in name only. They haven’t really grown up at all. They forget that children love both Mom and Dad. When one of the divorcing parents says: your Dad is shit (excuse the expression), the child experiences a conflict of loyalty. On the one hand, the child is in a situation where she’s being manipulated. On the other, she too learns to manipulate—to manipulate the adults.

- Not a great skill to have. Maybe we should admit that divorce is bad?

- Parents are always advised to go to a family therapist before they make the final decision about the divorce. But no matter what ends up happening, adults should treat each other with respect. The law emphasizes this by affirming fathers’ rights. In Sweden, the law is even more strict. In that country, if a mother sets the children against the father or restricts their communication, she could be denied custody altogether. As for Germany, we have a special government agency on family and child matters which helps former spouses choose a model of raising the child after divorce or agree on how to combine models to bring up the child. Children need help in accepting their new situation.

- In your book, this is precisely the main problem—the children don’t want to accept that Dad has a new family and that they have new stepbrothers and stepsisters. They want to get rid of these “assigned” brothers and sisters and make things go back to “normal.”

- Children really don’t have it easy. I decided that I would need to distance myself from a realistic situation and come up with an archetypal story with archetypal characters. The publishers of this book collaborate with psychologists. There was a special supplement for the book made for therapists—cardboard cut-outs of the characters. When a child living through his parents’ divorce comes in for counseling, the therapist offers him a choice of characters (princes, princesses, dragon family, and bandits) to select the one he likes best and most identifies with. The child tells the therapist how he is like a little bandit, a prince, or a dragon. 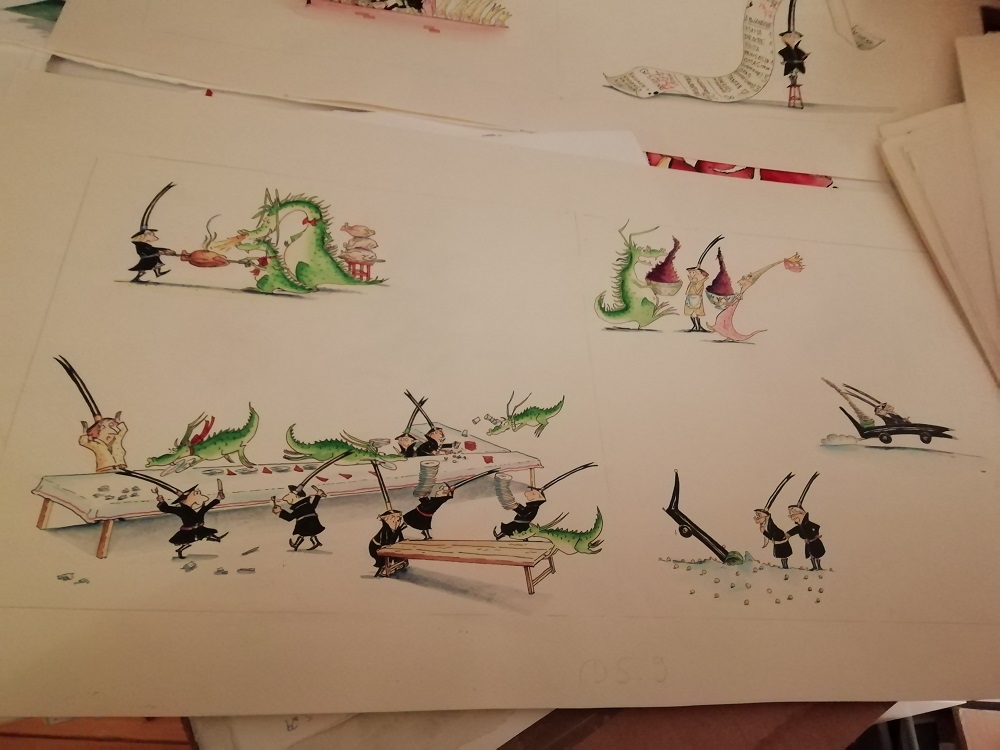 - That’s right, at the end of the book the mom marries a dragon and the family has new dragon-babies to contend with!

- Exactly. The children choose a figure and talk about their choice. Girls actually often choose the bandit figure because the little bandits of the book are energetic, proactive, and life-loving. I think that’s typical of all my books—the little protagonist is often brave and smart and can overcome even the most difficult situation. Children can’t always put what they’re feeling into words and rationalize it. It’s easier to use the language of images.

- Your book is now part of the toolbox for psychotherapists helping children through their parents’ divorce. Evidently, this help is necessary even when the former spouses don’t have any formal conflicts.

- The former partners see the relationship between them as settled. They tell their children: now you have brothers and sisters and you should all get along.

- They think that words will be enough and the children will readjust and obediently follow their instructions.

- Yes. This book ended up being important for the parents, too. More and more parents understand the problem now. The divorce rate is rising, and with it, the understanding of what divorce is. The Danish family therapist Jesper Juul looks at the positive side of a patchwork family. A hundred years ago, children growing up in villages were brought up by everyone in that village. People believed this was the only way you could give a child a normal upbringing. In big cities, only the nuclear family, consisting of the parents (or a parent) and children, has a direct influence on the child. In a patchwork family, however, the circle of close family members that have a relationship with the child is much wider. Of course, a stepfather or stepmother can’t expect to take the place of the biological father or mother in a child’s life. Stepbrothers and stepsisters are also a serious challenge for kids. They need to be psychologically flexible and find a way of being in different spaces.

- Could you talk a little more about how the book was received in Germany, when it first came out in 2010? Were there any “objections”?

- I didn’t hear any. I did get thank you letters from those who’d bought the book.

- In ten years it sold 8000 copies, I believe. My other books sell much better. Many parents don’t see any reason to buy a book on this subject. It has been translated into other languages, though. 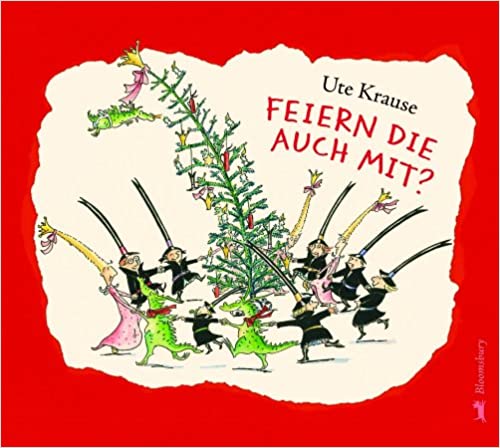 - It sounds like that may be the result of a traditional family values mindset, just like in Russia. Divorce goes against those values, so why talk about it?

- It’s a part of our lives now. This means we need to speak about it. In the book, by the way, the children end up being the most conservative. They want their parents to make up and get back together. They deny their new reality. It’s only when the kids understand that it‘s impossible [to fix], that other ways of being open up. Then they can continue to live and grow. In the book, the big party at the end becomes a symbol of their new lives.

- Yes, a celebration of life. I went through a divorce when I was very young. But it took me ten years to master the model described in the book. Am I right in saying that No Ordinary Family! was something of a personal manifesto?

- The book was the result of a situation I lived through myself. My son, too, was raised in a patchwork family. So the book grew out of my personal experience.

Read a review of No Ordinary Family!

Papmambook would like to thank The German Book Information Centre Moscow (Representative of the Frankfurt Book Fair in Russia) for their help in arranging the interview with Ute Krause and with translating it into English.