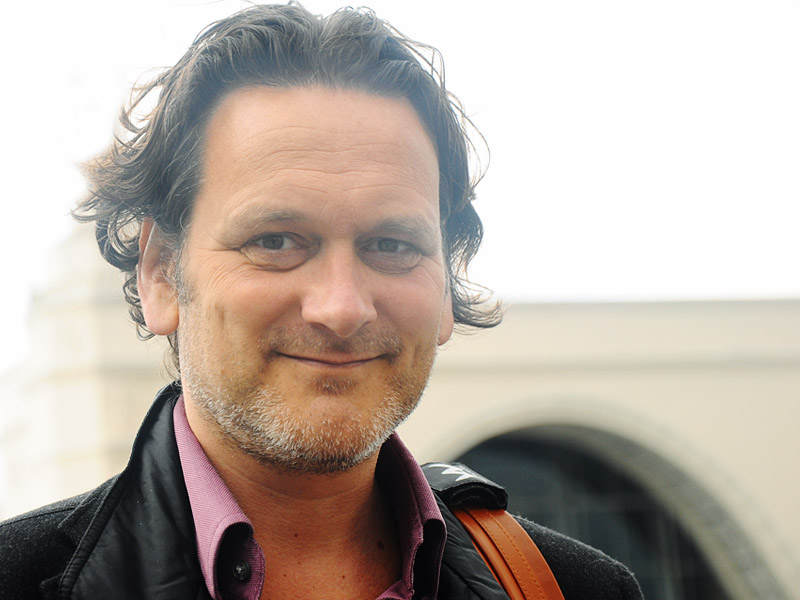 Jan Paul Schutten is a popular science writer and the author of over thirty books for children and teenagers. Papmambook’s correspondent caught up with Jan in May of 2016 at Moscow’s Polytech Festival, where the writer was presenting his new popular science book, The Mystery of LIfe: How Nothing Became Everything [English edition: Aladdin Paperbacks, 2015. ISBN 9781582705255].

- Jan, would you say that these days popular science books have edged out science fiction a bit?

- Popular science and science fiction are two entirely different animals. But the media has made science writing a whole lot more popular. Conducting experiments is also increasingly accessible, not just for specialists, but lay people as well, which increases interest in science. Now, instead of just reading about something, you can see it, test it, and see how it works.

- Popularizing science has always been an important job. But science is changing and becoming more complex. Does this change the nature of the work?

- The job itself hasn’t changed, we have. We stand on each others’ shoulders. Looking back, with our modern perspective, we can say that many of the previous popular science writers seem naive and even silly. But we learn from each other and become smarter.

- Is there a way to explain today’s advanced science to children under seven? Or have our conversations with young children not changed much since the last century?

- Children have changed too, and they’re different from the children that grew up in earlier decades. When I started giving lectures ten years ago, kids were different. Children grow up faster now, they start acting like adults earlier. It’s a great example of the evolution that’s happened in the course of one generation.

- Have the questions children ask changed over the last decade?

- No, but their reaction to answers has. Recently, I had a lecture in the Netherlands for eleven-year-olds. When they heard we would be talking about children’s books, they were disappointed at first—they thought it would be boring, that they were too grown-up to talk about children’s things. But five minutes later they were intrigued after all. That happens at a lot of my lectures these days.

- What is it that draws kids in? What did they find interesting before and what are they interested in now?

- There are certain key questions which any child has, no matter whether it’s the 20th or 21st century, the year 2016, whatever. The origin of life, how people are born, for instance. But, of course, there are other things which interest kids today. Genetics, humanoid robots, the Big Bang—there are lots of topics which, ten years ago, were largely the domain of specialists. Now any curious child will have heard of them. Topics change and books change. As writers for children, we should understand which approach they’ll like and find interesting. Fifty years ago, The Mystery of Life wouldn’t be considered a good children’s book, but I think it’s appropriate for today’s kids. We have to convey information with funny pictures, for example. Children enjoy and absorb information better this way. Because today’s kids don’t want to know everything, they want to know everything that’s interesting. And writers change with time, too.

- Are there topics you wouldn’t tell children about?

- Of course there are some natural taboos. There are things that might scare children. I’m currently writing a book about the future. In it, I left out issues that might scare kids and which they really don’t need to know about yet. For example, I didn’t write that if people continue to spread out across Earth, and population density rises, there may be epidemics. It’s a realistic scenario for what might happen in the future, but there’s no need to frighten children. In any case, I prefer to write about positive things, such as how medicine has improved. At the same time, I don’t avoid difficult issues. In The Mystery of Life, I write about environmental pollution and overfishing. There are some topics where I have no hope at all, like the complete depletion of fish stocks. This disaster is happening right now. There are places on the planet where there are absolutely no fish left. Sometimes, people are stupid.

- Do you need to have certain experience as a reader to talk about science? And is it important to be a reader to make discoveries?

- Yes, I’ll answer both questions. There are children everywhere that hate reading. There’s a way to get them interested—by giving them non-fiction instead of fiction. They can open a non-fiction book to any page and find something interesting. Non-fiction helps children to read easier and with pleasure. They might learn to enjoy reading, start reading more, and then give fiction a try. A book helps you learn about a topic that interests you, which is the start to becoming a scientist. One of a book’s jobs is to make a person think. Ignorance is terrifying. Most religious terrorism comes from ignorance. If the terrorists knew from childhood that there is another way of seeing things than a literal understanding of a religious text, it would make the world a better place. In my new book I write about why smoking is so stupid. If one out of a hundred readers never starts smoking because of my book, it could save a lot of lives.

- What’s your position on the divergence of the theory of evolution and the theory of “intelligent design”? Which do you personally believe?

- I write a lot about God, but I don’t know the answer to that question and I’m still searching for one. I believe in evolution, but what caused the Big Bang? Was it God? I try to find answers for myself, and when I do, I’ll share them in a book.