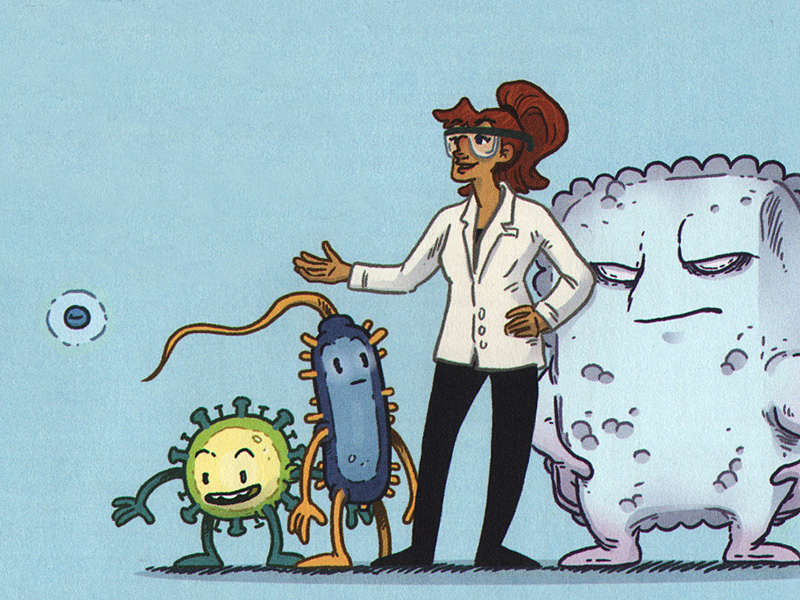 Fall and winter are practically synonymous with cold and flu season. Matvey doesn’t get sick quite as often now, but I can recall years where we had to fight off one bug or another pretty much every month. He was still very little then and wasn’t all that interested in learning why he’d gotten sick. Now, however, it’s a leading topic of conversation once the first symptoms start to appear.

“It’s all because of germs, right? Or is it bacteria? What’s the difference between them?” Matvey wants to know. What am I supposed to say if I don’t quite know the answers myself? The internet can help some, but there’s nothing more visually clear than a book. 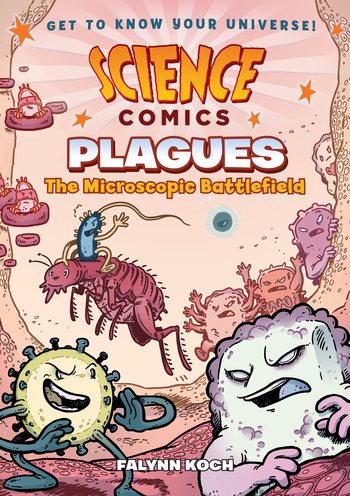 At home we had several reference books about anatomy, how things work in the human body, what helps and what hurts it. Still, it was the comic book Plagues: The Microscopic Battlefield [published by First Second, 2017. ISBN 9781626727533] which turned out to be the most useful of all. It was perfect because of the high picture to text ratio, and also because it was precisely about those nasty “bugs” which cause us so much grief.

“Ugh, they’re gross!,” was the first thing Matvey said when he got a hold of the book.

Actually, as we learned from the very first pages, Matvey’s cough and runny nose were not quite the fault of the book’s main characters. The latter were Yellow Fever and Bubonic Plague. And yet the author, Falynn Koch, managed to depict these parasites as funny little monsters, spry and full of mischief, desperate to cause trouble!

As befits all good literature, these two mischief-makers have to contend with the good guys: the doctor and her trusty Leukocytes—T-cells and B-cells, who fight together against viruses and microbes. 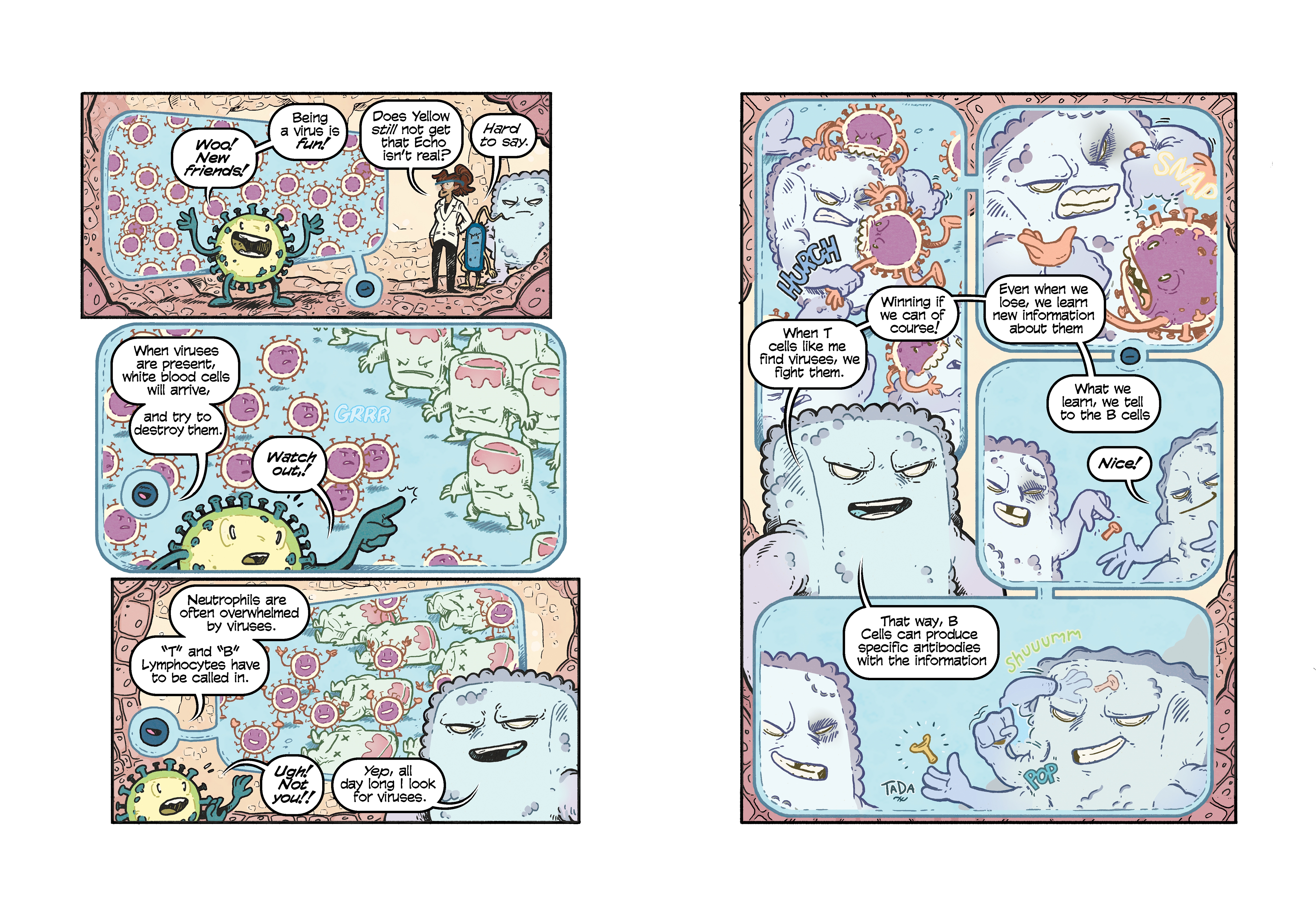 “They want to destroy them, right?,” asked Matvey.

“Seems like it, after all, that’s what they’re supposed to do,” I said. “But it doesn’t seem like the doctor is after that.”

Matvey went back to reading and a few minutes later said, quite thoughtfully:

“It’s all clear. The doctor wants to make the bad guys good.”

To be honest, I was sure Matvey had gotten something wrong. It seemed strange to me that viruses and microbes could mend their ways and become “good.” So I sat beside him and we read on together.

What do you know, Matvey was right! Turns out the bad guys can become good!

Matvey smiled. “It’s just like real life. There was a boy at my school that was always a troublemaker, but now he’s one of the teacher’s helpers.

“Wow!” I was genuinely surprised. “Who made him change like that?”

“I don’t know. Maybe someone good bit him and infected him with niceness?”

We’d just gotten to the point in the story where doctors first started injecting live or weakened viruses into the body.

“That way the body gets to know the virus and isn’t afraid of it anymore,” said Matvey knowingly.

Maybe he’d known the word, but there were dozens more terms that we came across in the text that were new for me, as well as for him: prokaryotes, spirochaete, pathogens, visual stimulation, endemic ...Of course, we didn’t understand all of it perfectly. At least it seemed we’d finally managed to understand the differences between bacteria and viruses.

“Look!” Matvey was clearly pleased that he was the first to find the answer to his question. “Bacteria can multiply on their own, but viruses can’t! They need a cell that will divide and spread the virus.”

And that was just the beginning….

Among other things, we learned that our bodies have pretty strong defense system: mucous membranes in the nose and throat, saliva and stomach acid, protective skin microbes that eat dirt and oils, gut bacteria….

“Woah! Just like palace guards!” Matvey was quick to find a comparison.

“Exactly, but sometimes the guards are asleep, or there aren’t enough of them to fight off the enemy…”

“So we have to help them out and wash our hands!”

The book entertained us, frightened us, and, strangely enough, made us laugh! And humor is particularly important when most of the illustrations feature guts, viruses, and microbes.

One character realizes that he’s been picking his nose and eating undercooked meat.

Another, sick with the plague, mentions that he isn’t looking so good.

The Plague itself seems pleased, smiling and holding the sick man’s hand.

A defeated virus hands a fellow the antibodies from the leukocyte attack. Leave me behind, let this be a lesson...

I will learn, I promise! The other solemnly swears and tears away.

Now, it’s just a question of a slight mutation, and next time the B-cell antibodies won’t work.

To be fair, the author reassures his readers: a yearly flu vaccine will help B-cells learn about the latest mutations and prepare for them, suggesting that good is stronger than evil after all.

Even though the book’s main characters Plague and Yellow Fever are adamant in justifying their attacks, in the end, they finally “give up” and start on the right path: they help fight other bad guys. All ends well—at least for us people. These experiments with viruses and bacteria are for our benefit, after all!

Matvey and I learned a little something about microorganisms and bacteria, along with stories of the most dangerous epidemics in history, the diseases we have beaten, and those we have yet to find a cure for. We even tried to learn the names of the scientists, who made the most important discoveries in the field… but for some reason the only thing that comes to mind is “Koch’s bacillus.”

“It’s lucky we know how to cure a cold,” said Matvey and blew his nose.

“I hear you,” I said, shooting a glance at the medicine shelf.

Not to worry—just give us time, we’ll beat them all!