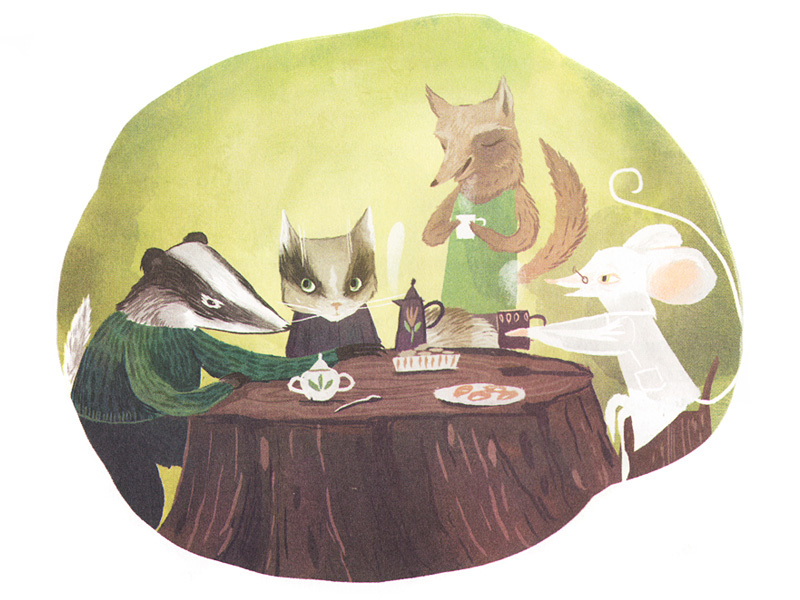 Beastly Crimes is a four-part young adult mystery series by the Russian writer Anna Starobinets illustrated by Marie Muravski. The books are set in the Far Woods forest, and all the characters are animals. The books were published in English in 2019 by Dover Publications. Papmambook's teenage authors share their thoughts on the series.

The other day I walked into a bookstore. You know, just to stroll through the stacks, smell the glossy paper, leaf through newly published books. In the Wolf’s Lair by Anna Starobinets was on a shelf with books meant for beginning readers. Perhaps it was the cover that had confused the manager. On it [the cover of the Russian edition], there’s a wolf squinting slyly, a tense cat with a steely glare, and a rabbit doubled over. Perfect for kindergarteners, right? When I first picked up the book, I made the same mistake. I saw the “7+” age designation and decided the book was definitely not for me. But I was wrong, because In the Wolf’s Lair [the first book in the Beastly Crimes series] is a finely written parody of the modern mystery novel. 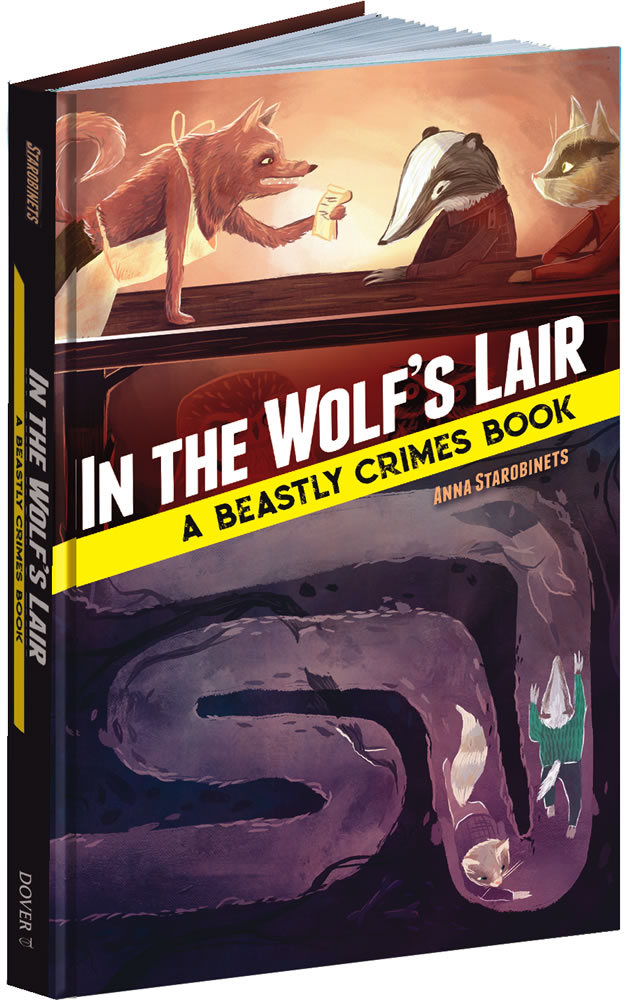 I’ll say something that may seem radical for a teenager: it’s best to read this book with your parents. They’ll enjoy it, though they might smile at different parts than the ones you find funny.

What makes the parody genre special is that it assumes that readers are familiar with the original, with what is being parodied. Readers who haven’t read or watched modern mysteries may not quite understand all the book’s humor. That’s why I wouldn’t read In the Wolf’s Lair to my younger cousin. It’s hard to explain the concepts of “psychological profiling” or “psychologist” to a small child.

There’s been a cruel and cunning crime committed in the Far Woods. The investigation, as in a foreign mystery novel, is conducted by two detectives. There’s the experienced but world-weary Chief Badger, at war with his animal passions and vices. Then there’s his junior counterpart Badgercat, who is desperately eager to prove himself. The story upholds the traditions of a modern mystery: the junior detective of the Far Woods has psychological problems—he can’t accept himself as he is, so he doesn’t drink milk and paints black badger stripes on his cat’s snout, which creates additional issues for his investigation. What Western mystery can do without a psychologist? There’s one here, too. The psychologist Mouse draws up an offender profile, arguing with Badgercat in the process. The book features other situations typical of a criminal investigation. The initial, seemingly obvious, theory, is that the Far Woods’ only repeat offender, Wolf, is to blame for the crime. But that theory falls through, though Chief Badger does demonstrate brilliant use of police interrogation techniques.

In a good parody, it’s very hard to walk the line between the funny and the corny, and not take things too far. Anna Starobinets pulls it off, thanks in part to her excellent command of language. The book has a lot of world play which makes you laugh like crazy. The storyline is dynamic—you can barely keep up with all the plot twists. As with any good mystery, you get the sense while you’re reading that someone awful is standing right behind you. That there’s someone lurking in the shadows, biding his time. It’s no accident that the cover depicts a den with two scary eyes glowing in the darkness.

This particular crime has been solved, but the Far Woods hold further mysteries.

This review was originally published in 2016.

When you hear the word “mystery novel,” usually the first thing that comes to mind is Arthur Conan Doyle and his Sherlock Holmes or Agatha Christie and her Hercule Poirot. But there are other detectives out there, and other authors that write mysteries. There’s the Beastly Crimes series by Anna Starobinets, for example. In the books, animals, rather than people, investigate crimes. I read all four books in the series.

The structure of the series reminds me of Hergé’s comics about Tintin. Each album has its own plot, but the same characters, events, and places weave through them all.

The main character is Chief Badger of the Far Woods Police. He’s an elderly and experienced detective, kind and smart. The other detective, Assistant Chief Badger is also important in the plot’s development. He’s young, restless, romantic, daring, desperate, but also very smart. He’s actually called Badgercat, because he really looks like a cat, and he himself isn’t sure if he’s a cat or a badger.

There are several criminals in Beastly Crimes: both animals and people. In the first book, for example, a rabbit and his wife were the criminals. They made it seem as though the wolf had eaten the rabbit so that they would get the wolf’s big house. I liked A Predator’s Rights (the second book) best. It’s about the case of a dead chicken. The criminal here was a dog, who was supposed to be guarding the chicken. 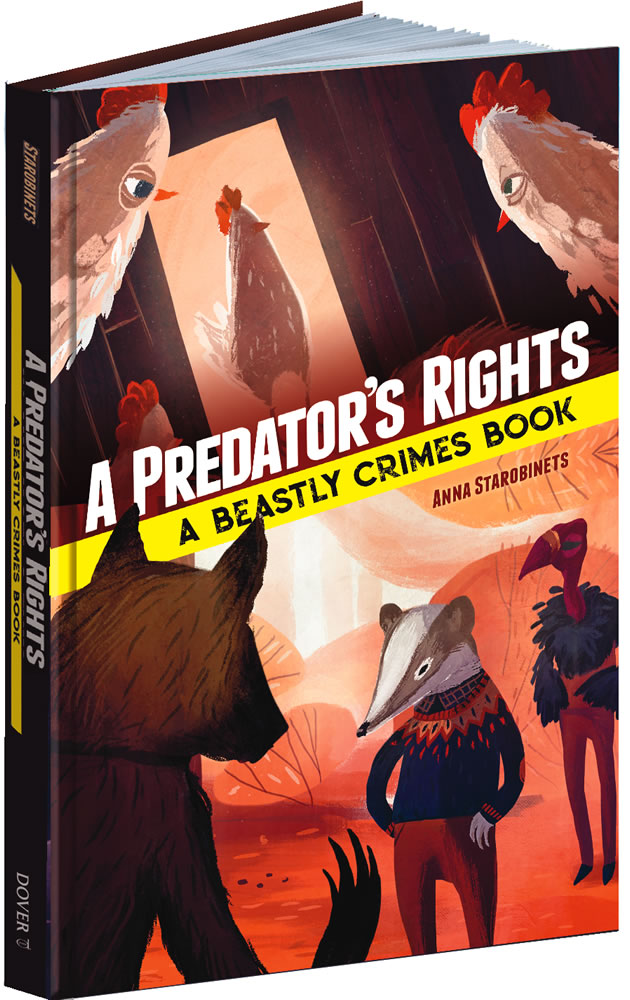 The book vividly shows the characters of the animals, their habits, and “beliefs.” I remember an episode from Claws of Rage where the animals have different superstitions for why there is thunder. The dogs think that the Great Dog of Thunder sends down thunder, while Badgercat is convinced it’s the ThunderBearer.

While reading these mysteries, I didn’t have the same sense of fear and dread I did while reading Sherlock Holmes. I recommend mystery lovers over 11 read this exciting (and slightly dark) book series.