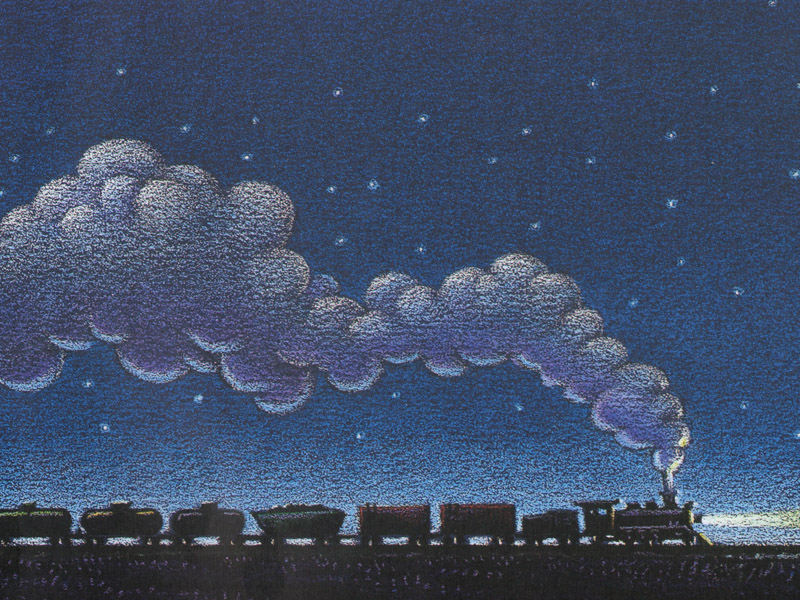 All the boys in our family love trains. And it’s not just because we live near a train station, with the occasional mid-nineteenth-century black locomotive chugging by. I personally think there’s something in those fantastic noisy beasts that’s very dear to a little boy’s heart. At home we do have a few books about railroad machinery, but all are for early elementary school readers, and all are purely educational. What we needed was a book that all the “men” of our family would find interesting, whether they were eighteen months or eight years old. For a big family, children’s book with universal appeal will live a long life, even if it gets a little scruffy and has to be patched up with tape. 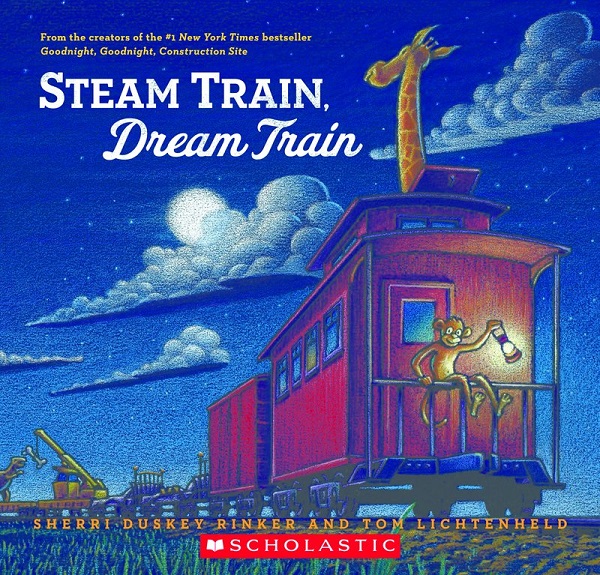 Recently, four-year-old Mitya got a train book as a gift—a copy of Steam Train, Dream Train (most recently published in English by Chronicle Books in 2018; ISBN 9781452152172), fresh from the press. The authors, Sherri Duskey Rinker and Tom Lichtenheld, were completely unknown to us, and the plot was perfectly simple. Under a blue night sky, a train hurtles from point A to point B, its many-colored cars shrouded in smoke. Dinosaurs fill one train car, a giraffe’s long neck pokes out of another. By the end of the thrilling journey, the giant train turns into a little toy train set, which sleeps at the foot of a boy’s bed.

This book was perfect for our youngest preschooler—a classic baby book to look through and read aloud, except that it had real “grown-up” pages instead of paperboard. There were four or, in some cases, two, rhyming lines per page and huge illustrations a child can dive right into, to play under the dome of the magic night.

“Ooo!”, said Mitya, admiring his beautiful new book. Right away, he demanded that his older sister read it to him.

I was pleased, too. From the very first page, the pictures appeal to a child’s personal experience in life and play. Looks like we got just the right kind of children’s book, I thought with relief. Train cars of all shapes and colors invite a flurry of questions, while the dinosaurs and giraffes are sure to charm any child. Same goes for elephants, who make frequent appearances throughout the book. 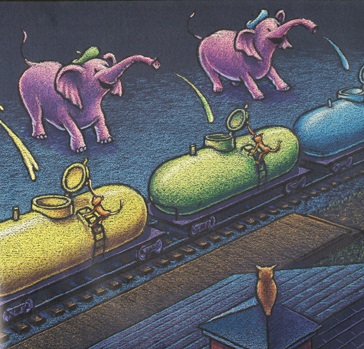 Anna, the eldest, made a face—why read a baby book when there are more serious things to attend to! Dutifully, she sat down to read anyway. Next thing I know, she was swinging her leg to the rhythm of the text. Little Fedya was dancing away beside her.

Through the darkness, clickety-clack…
coming closer, down the track…
hold your breath so you can hear
huffing, chuffing drawing near.

To be fair, it was hard not to start bouncing and dancing along.

“Mom! It’s just like the Polar Express!”
Makar burrowed closer as soon as he heard the first lines. “Can I listen too?”

By the next day, Mitya and Makar knew the text by heart. Now every time we’re riding the commuter rail or stopped at a traffic light, they joyfully recite it.

And so we had a new beloved family book, in which each of us found something to love. Little Fedya toots like a train enthusiastically and points at the illustrations. Mitya and Anna noticed that the cadence varies throughout the text. It calls to mind the rhythm of train wheels, which makes it especially fun to race around the house, speeding up and braking suddenly, reciting the fun rhymes all the while.

The book, which was written as a lullaby, turned out to be just as fun to play with, and not just fall sleep to. Although, of course, the train is heading for slumber. The quick, galloping rhythm at the beginning gradually slows by the book’s end. It’s just like the children’s nursery before bed—noise and a flurry of activity in the evening, rather than perfect silence. Quiet does descend eventually, but not right away. We were grateful to the authors for this life-like detail.

It also turned out that this book was the perfect soundtrack for evening cleanup. We’d exhausted every other possible approach. You can try shaming or threatening kids into cleaning, present carrots, wave sticks, or argue endlessly. Fact is, nobody wants to clean up the room. Or you could read Steam Train, Dream Train, from the book or from memory. After all, the train’s passengers are none other than stuffed animals and other playthings, carefully arranged in their seats, so that the train can pull into a clean nursery. As though by magic, there’s nearly instant order in our own playroom.

And then there’s the most unexpected effect—this magic lullaby was able to satisfy my children’s infinite, endlessly expanding curiosity. The children picked up on over fifteen special train words and names for different kinds of train cars. And since they’re all wonderfully illustrated, my boys will never mistake a tanker for a boxcar or a reefer car.

This versatile baby book turned out to be a favorite for all ages.