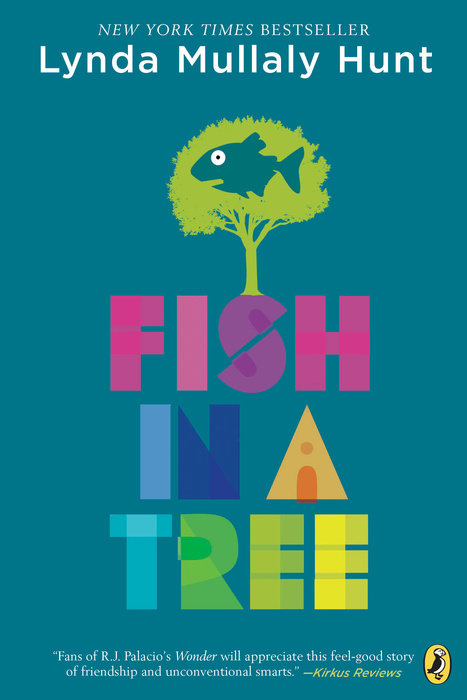 My mom often jokes that my younger cousin is the reincarnation of Catherine the Great. Is there anyone else in the world that could make four mistakes in a three-letter word? I’ve always been curious about my cousin’s unique spelling, so when I saw the blurb for Lynda Mullaly Hunt’s Fish in a Tree Most recent English edition: Thorndike Press Large Print, 2019. ISBN 9781432859732. , I just had to read it, even though it’s a book for younger children.

Ally Nickerson, the main character, has dyslexia. Letters seem to dance before her eyes, unwilling to arrange themselves into straight lines, and so Ally struggles to read. She draws incredible pictures, unlike anything anyone has ever seen, but can’t write a single sentence. Ally doesn’t know what’s wrong with her, why she can’t manage to do the homework that comes so easily to her classmates. She can’t understand how others master those squiggly letters. But she’s gotten so good at hiding her problem, that no one, neither her parents, nor her elementary school teachers or school principal, suspect that anything is wrong.

Ally’s father is in the army and her family often moves. She’s changed seven schools in seven years, and no one at any of these schools has ever guessed her secret. Ally is afraid to disappoint her parents and doesn’t tell them how hard it is for her to come into class every day or deal with the challenges she encounters there. She asks her older brother for help, but there’s not much he can do. Travis can fix just about anything but can’t read a single line of an instruction manual. Ally is left to struggle alone with her feelings of failure and inadequacy. She dreams of becoming invisible. Her teacher is about to go on maternity leave, and a substitute teacher is supposed to take her place. Mrs. Hall tells the children to write a few lines about themselves to help the new teacher get to know each of them. Ally crookedly writes one of the few words she can manage: “Why?”

The children decide to get their teacher flowers and cards before she leaves. Ally is sure Mrs. Hall will love her card with its huge bouquet of yellow flowers, but the teacher pushes it away in horror. She’s shocked at the words along the edge of the card, an expression of sympathy that Ally simply wasn’t able to read. The girl ends up back in the principal’s office, punished for her “troublemaking.”

Everything changes when the new teacher arrives. For Mr. Daniels, a student’s personality matters much more than his or her grades. As they complete his unusual, creative assignments, the students start to discover new things in themselves and to open up in new ways for their classmates. For the first time, Ally feels that she is good at something and she likes the feeling.

Little by little, Mr. Daniels teaches Ally to trust him. One day, she tells him what he had already suspected. The teacher has a serious talk with her, and explains what she’s dealing with and offers to help. Every day after class, they play chess and draw letters with anything they find: spray paint, shaving cream, sand. At the start of their lessons, Mr. Daniels quotes Albert Einstein who, like Ally, may have had dyslexia: “Everybody is a genius. But if you judge a fish by its ability to climb a tree, it will live its whole life believing that it is stupid.” With her teacher’s support, Ally decides she no longer wants to disappear. She finds friends, gains her classmates’ respect, and feels true pride and happiness in her success. Ally’s brother, Travis, sees how she’s changed and asks her for help. Could he, too, attend Mr. Daniels’s lessons?

My little cousin doesn’t have dyslexia. I don’t know what her condition is called. Even when she copies words out from her textbook, she spells everything the way it sounds: “wadiri” instead of “watery,” “tshierfal” instead of “cheerful.” I see her classmates make fun of her and I’m afraid that, like Ally, she’ll lose faith in herself, even though no one in her class runs as fast, jumps as far, or climbs as high she does. But what if Einstein’s right?